It rained enough that the grass is now green and brown, instead of yellow and grey, and no longer crunches underfoot! We have had a couple of days of relief from watering - very welcome, although we have continued to fill rows of buckets and garden tubs with 'grey water'.

There's quite a lot of catching up...

Wednesday last week was when I did a sudden backwards roll when trying to crouch down to write 'MILK' on the up turned bucket, ready for the new milkman. 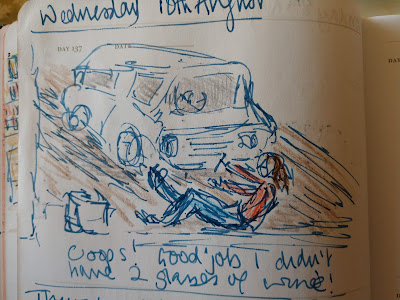 Tuesday's milk delivery, the first in the new schedule, was safely deposited under the bucket. Today's was just left on the door step. On Friday night we shall try and remember to leave the bucket on the doorstep where he will be able to find it. Although at 8am rather than 4 am when used to be delivered it should have been light enough to see it beside the door. 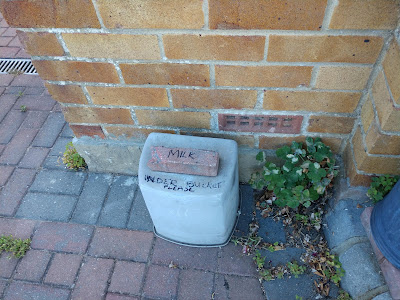 I've started doing bits of water colouring again, just 'pits and pieces' as my godmother used to say. She was Finnish, and came over in the 1950s so her English was very good, but she still counted her stitches in Finnish, and remembered the Lord's Prayer from Sunday School in Finnish. 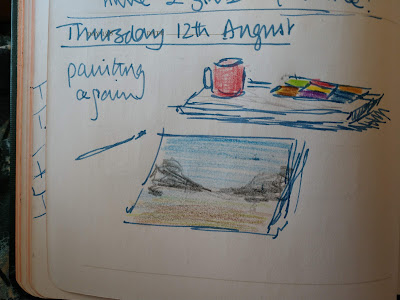 I started on my French 2021 planner, originally with pencil, but found it easier with a fine brush and watercolour. The paper is too absorbent for water colour really, but manageable. It's really for getting practice. 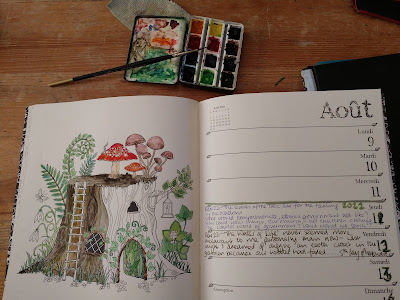 The spaghetti squash seedlings I gave to our neighbours produced two squashes. Their little boy, about 2, was convinced it was some kind of unsatisfactory ball. Too heavy to kick, and it didn't bounce at all well. They gave me the one that he hadn't been playing with.
My vines have also produced two squashes; the LH plant has leaned oved and laid its squash in the right hand tub, so the RH plant has dangled the squash over the side. 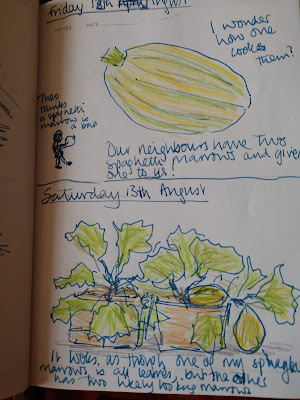 Tuesday it rained a little, like a sort of 'trial run'. We collected about an inch in each bucket - enough for just one half bucket in total! 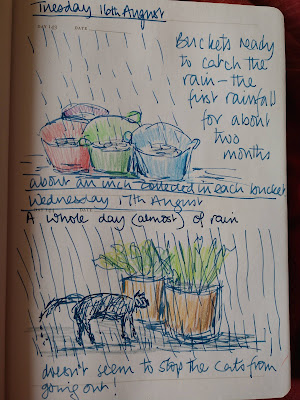 Our cats have never seemed to mind being caught in the rain; they come in absolutely dripping and then demand to be dried off. Preferably while sitting on a lap.
I've never cooked a spaghetti marrow before, and went for the easiest recipe as it was hot and I was feeling bothered. I found a website with several different methods for cooking them, and chose the slow cooker one. The instructions were simple enough; pierce through the skin in a few places, put it in the slow cooker and leave it. 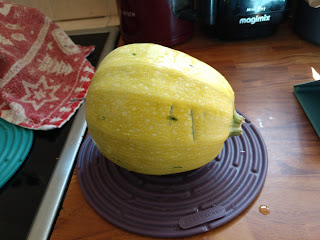 For this method, do not cut the squash in half and instead leave it whole.

With a small, sharp knife, poke several holes into the outside of the squash. These will allow steam to escape. Set the whole squash into a slow cooker. Add the lid and cook on HIGH for 3 to 4 hours or on LOW for 5 to 6 hours. Depending on the size of the squash, you may need more cooking time.

When the squash is done, allow to cool for about 5 minutes, and then cut in half. Run a fork through the flesh to separate the “spaghettilike” strands/noodles.

Yup - it worked, just as they said! I seasoned the 'spaghetti' with butter, salt and pepper and it was delicious.
I came over all dizzy and faint at the beginning of the week, felt very unsteady and very unhappy about it. Then I had a brainwave; when living in Indonesia and Singapore in the 1970s I experienced the same thing several times, and the cure was to eat or drink something salty.
I'm a great fan of  this brand of vegetable stock, and quite often drink a teaspoon of the stock powder in a mug of hot water as a quick and easy alternative to tea or coffee if I want a hot drink. I therefore had a cup of bouillon in the morning several days running (I did feel as though I should be lying on a deck chair on a transatlantic liner, being served by a superior white-coated steward, but that part of the dream remained a dream). 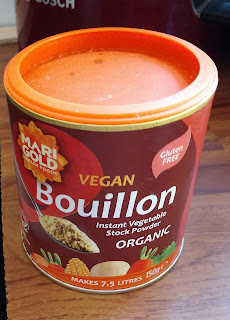 It seemed to do the trick, and I've been fine since, especially now it is cooler.
I've finished last week's 'toadstools on a stump' picture, using watercolour pencils for the background.  I'm part way through this week's now; a wreath of flowers and leaves. 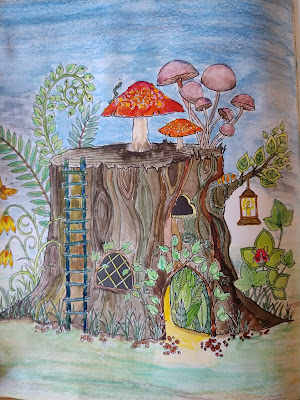 Bear with me, non-churchy types; I think this is interesting for anyone who is fascinated by Ancient History...

I was looking for the next project or theme or whatever for my very casual church homegroup (we meet on zoom to chat, and talk about whatever we were supposed to have looked at during the week but forgot or didn't get round to). The constraints are;

It must be freely available, as I don't want us all to have to buy some book or course,

It must not be prescriptive as in, 'read this and then answer these questions'

I need to be able to quickly and easily print off something to send to one member who is not on the internet, and joins the group at a friend's house

It needs to be amusing (sorry, I have a mostly, but not always lighthearted and frivolous approach to things)

At the Bible Society website I discovered this video series;

and so we are sorted. The videos are only a few minutes long, so it is easy to watch them during the zoom, and I can easily copy and paste and post the extra information.

What is really interesting is seeing the places, so different to here in England, where the events of the Old and New Testament took place, and hearing Andrew Ollerton's quirky take on them.

And yes, I did buy his book 'The Bible', after doing a 'look inside' on Amazon.

Anyone who can write this gets my attention 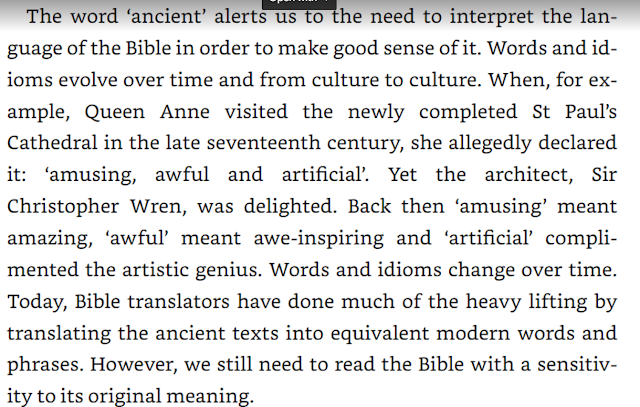 Deleting yesterday seems to have solved the problem.

But time and tide wait for no man, and you will never find out about yesterday...

I woke up at 4am this morning, and crept down stairs and out into the back garden without switching on any lights to try and save my night vision.

Luckily the full moon was still just to the side of the house, but it was still pretty light, light enough to see the flowers in the border. After a while more stars became visible as I became accustomed to the darkness, and eventually I SAW A SHOOTING STAR, a single bright silver-white streak across the sky!

That was the only one; I didn’t stay out long because star gazing is jolly hard on the neck muscles. I expect I could have spent longer outside if I had brought a blanket out to be able to lie down, but neither the hard paving nor the prickly dry grass seemed like comfortable options. I wonder if you can buy specially designed star-gazing camp chairs? Probably one of those loungers that capsize when you try and get out of them would be a possibility.

I have had this as an ear-worm for several days now; but a lovely ear-worm all the same. 'Moon and stars' is the bit that has got stuck, like a needle on a record.

Today is another day of seeking out cooler spots. One cat is almost invisible at the back of a flowerbed close to the house; her fur is exactly the same colour as the earth. The other laboriously oscillates between ‘her chair’ and the floor by the piano. The current afternoon spot for humans is outside in the shade where a breeze comes around the corner of the house, not too far from the fridge.