I find working out where one week ends and the other begins rather tricky.

When does the 'weekend' begin? When is the weekend?

I think of Friday as being the 'weekend', as it is a non-teaching day, apart from the drumming workshop in the evening which is very informal.

Saturday is NOT a 'weekend' day, as I have a fairly gruelling teaching session taking up all of the morning - eight pupils back-to-back. Saturday afternoon is 'recovery' time.

Sunday - ah yes, another 'weekend' day, especially if I am not down on a church rota. Playing the piano or organ in a church service is definitely 'work' - if I do a whole service then I will play a couple of pieces at the beginning, a couple of pieces while people go up to receive communion, and a short burst of something cheerful at the end. Oh, and three hymns, of anything up to six verses each. That's work.

So, today was a sort of 'weekend' day. Up early, off to my God-mother's house to tidy up, meet the Estate Agent, clean the loo and the fridge, collect up all the unused medicines (three bags full - she'd just had a new prescription delivered), break open a filing cupboard in the garage (pots of old paint and a painter's floor cloth securely locked away from... who? whom?) and return the despised and ignored Zimmer frame to the hospital.

After lunch (fish and chips at the same garden centre as last Friday) we called into an amazing furniture store in Guildford. Our favourite computer chair in the sitting room has a tendency to catch the underside of the desk, lifting it and dropping it onto the cables, so we've swapped it for a better behaved chair from upstairs. However, the fabric is wearing through and it is showing its age (about twenty years).

Here's what we bought, in a darker colour wood. Happily, it is in the sale! We should be getting it in a couple of weeks.

On the way I finished the second slipper, and I'm wearing them both now. 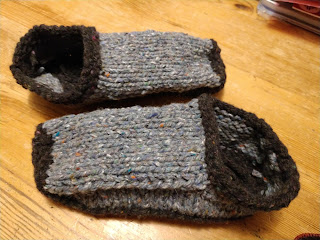 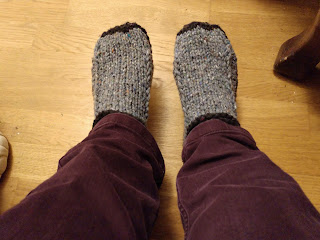 Now I am in between knitting projects - what next?
Posted by KirstenM at 21:05:00 No comments:

Email ThisBlogThis!Share to TwitterShare to FacebookShare to Pinterest
Labels: Getting things DONE, knitting, My God-mother 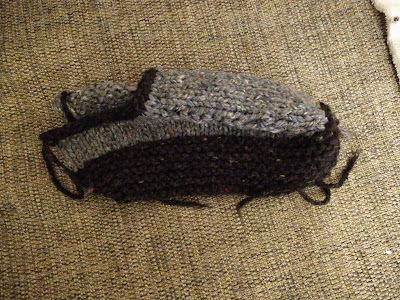 
Is it still Wednesday? I think it may be - it feels as though we've had a week already.
Posted by KirstenM at 19:43:00 No comments:

I brought up breakfast in bed of cereals and coffee, he served up a second breakfast later on of Croissants and coffee. That's quite a good way of arranging things - saves filling the bed with crumbs.

There were several loads put through the washing machine and hung up to dry,

There was cleaning of the bathroom,

The sun came out, and there nearly was Going for a Walk, but there were also huge black clouds, so we did planting of anenomes (two) and moving of flower pots (what seemed like thousands) instead.

There was examination of the probate forms to see if we were in a position to complete them and be ready to send them on their way (we think we are).

There was catching up with writing quotations, collected over several weeks, into my commonplace book (posh name for notebook!)

There was paying some bills and so forth.

There was baking; my 2020 Almanac has several recipes for each month; the lentil one I did last week, and the roasted rhubarb one I tried today. Also very good, if you like rhubarb. Which I do. And he doesn't, so it's all be mine, all mine!

(cut the rhubarb into useful lengths, toss in orange juice and honey (I used maple syrup) and star anise (I left that out, not my favourite flavour) and roast at 180 fan oven for 20 minutes. I'm pleased that I lined the roasting dish..., although the rhubarb didn't stick, and the maple syrup didn't burn onto the pan.

There was spare rhubarb, so I made puff pastry rhubarb crumble tarts (also all mine).

Then there was spare puff pastry, so I made cheese straws. Not so successful - more cheese would have improved them. 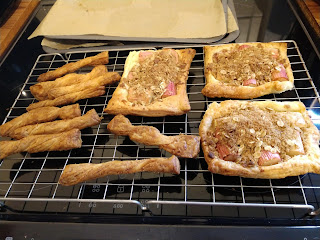 Recipes, from the internet 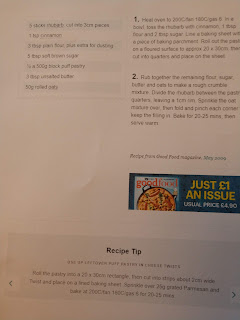 Like I said - an almost nothing day, compared to previous days;

Friday - checking my godmother's house, talking to her neighbours, talking to various offices in connection with the house, buying lunch at a garden centre (and flowers for friends, and anenomes for me), calling in at the funeral director to tie up loose ends... and leading the drumming workshop when we got home

Saturday - teaching all morning, now that it is term time again. Eight pupils, back to back. That was a bit of a shock to the system, sitting around in a semi-catatonic state all afternoon and evening...

Now there is to be Eating of Supper provided by my nearest and dearest - yum yum!
Posted by KirstenM at 18:18:00 No comments: