I guess it was a sweet sermon -  don't know, I was teaching my Junior Church (age 6 - 8 yr) group their lesson as fast as I could.

Our church is in the last few weeks of an inter-regnum; that's the no-man's land (or no-woman's land; the previous vicars have all been male but the next one could have been a woman, except we know he's going to be a man. Actually, he is already a man, he's been a man all his life. Oh dear. This is all needlessly complicated) where was I? no-man's land between one vicar leaving and the next one moving in.

This means that we have been treated to a series of "Visiting Vicars"; Team clergy, NSMs (or whatever they are called these days) and various retired vicars who are happy to get stuck in from time to time. They all have very different ideas about sermons; we had got used to 35 minute detailed and comprehensive expositions of the latest sermon series, supported by manifold quotations from the Bible and a myriad of Powerpoint slides from the previous incumbent. Now each Sunday sermon is a new experience. And usually short.

We Sunday School leaders had been warned that today's sermon had been a succinct 7 minutes at the first service, so our lesson time would be shorter than expected. The sidesman would come and warn us once the sermon was underway and then the countdown would start; the 7 minute sermon plus the intercessions plus two songs (they often, but not always sing them a couple of times through as described here).

I had thought I would do the whited sepulchres, bit, but thought that the more tender hearted might succumb to nightmares. So instead I chose the bit from Matthew that goes

It all started well, and I successfully coped with various diversions about tithing and human anatomy and washing before meals. I did the "dirty water in a china pitcher" demonstration of being clean on the outside and dirty on the inside, all at brisk pace to try and get the point across. I was just about to start on the craft activity based on the pictures of the human body which I had already handed out, when the sidesman (woman, actually. Or female. What do we call people nowadays? Anyway, I mean someone conventionally dressed in a frock and sandals) appeared, and I knew I was working against the clock. 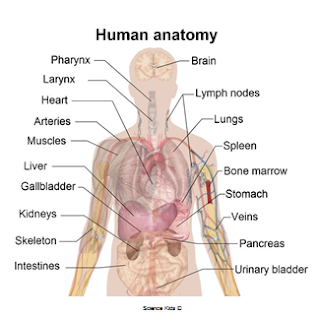 Then she reappeared - the Visiting Vicar had dispensed with the songs and Sunday School was Over.

I lined the children up, made sure that they all had their handouts and chivvied them back into church.

Wonder what the parents thought I had been teaching them today?

*Some of the organs.The pictures go from head to waist.
Posted by KirstenM at 20:44:00