I had a lovely letter from a good friend today - 6 sides of news, and chit chat, and the goings-on over Christmas in her neck of the woods. It began

﻿ "I have been meaning to write to you for some weeks now, with the intention of adding a little pleasure into your life (hopefully!) which must have become very hectic, if not fraught, since your Mum's illness + with Christmas intervening"


She has walloped several nails bang on the head.
﻿﻿

"adding a little pleasure into my life"

Hey! Don't underestimate how much a I love receiving letters through the mail, real letters, sliding between the catalogues and bills and junk mail and charity bags that disport themselves over the doormat! A corner, with a few letters of a word in real handwriting, just peeking between the brown enveloped harbingers of doom and hassle piled hap-hazard in a heap. YES!  You letters has added "great" deal of  pleasure" into my life. I pounced upon it with exclamations of delight, and then set it to one side, ready to savour properly, alongside a chocolate biscuit and cup of coffee after the dreary dross of the humdrum letters had been dealt with. 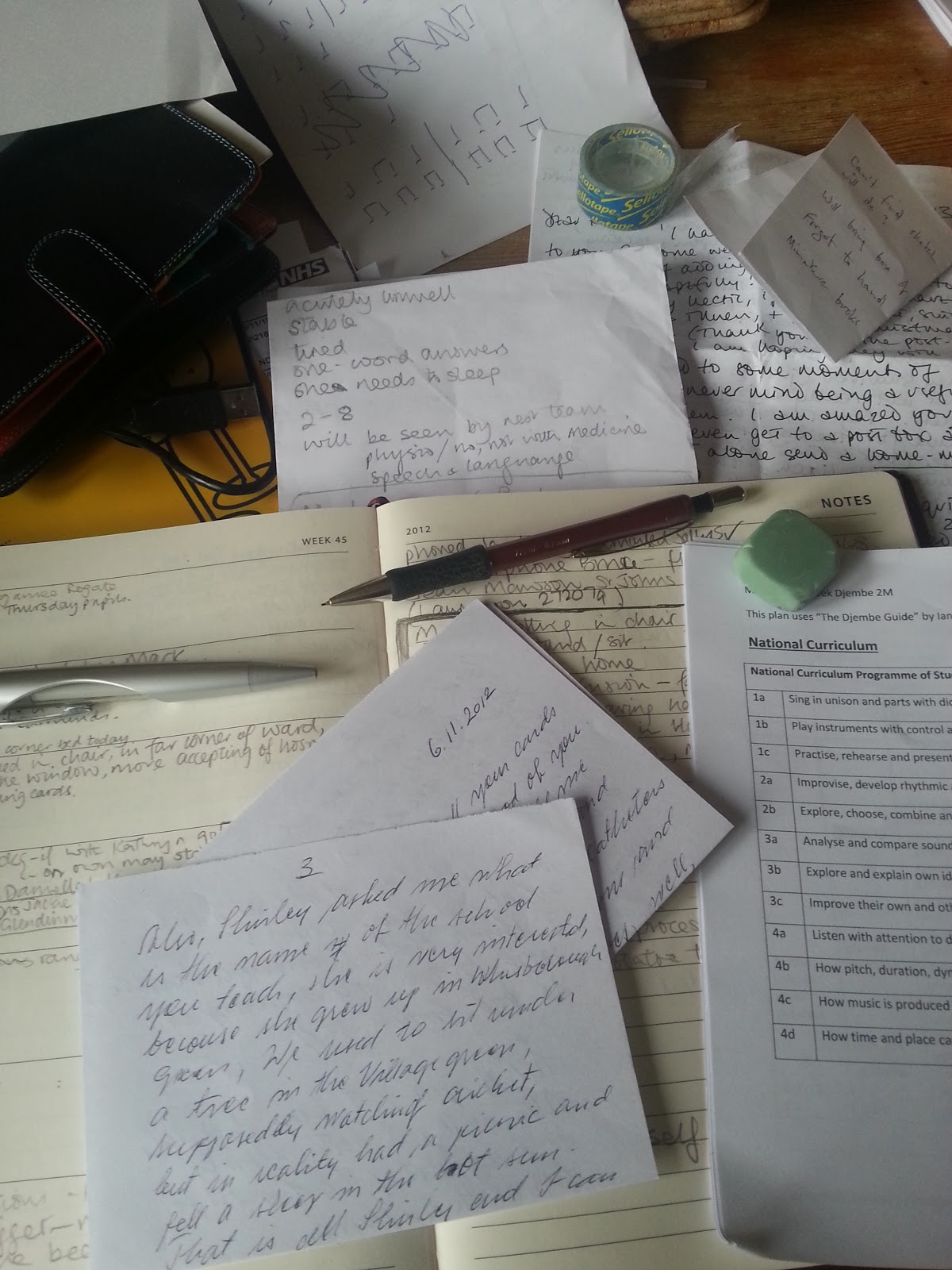 and how! When my mother first had the stroke, I needed to keep a great diary of who had rung, who needed calling back, who needed a letter as they weren't on email, who needed emails, who was visiting the hospital and when, latest updates from the hospital staff, what needed to be taken in to the hospital... Then there was my teaching, which involves planning and travelling and remembering which instruments to load into the car each morning... and my own routine/extra appointments for clinics and doctors and blood tests to factor in. Plus cancelling and re-arranging any of the above as the situation ebbed and flowed!
﻿﻿
"Fraught"

Until I read that word in her letter, I hadn't thought of it in connection with the past three months at all. It hit me with the force of a blow - (needed another biscuit straight away).

Yes, "fraught" is exactly the word.

I feel as though I have been walking a tightrope between everyone's needs and emotions (including my own - over the years I have learnt to be self-aware, and even down-right self-ish, in order to preserve my self). The tightrope has been swaying in the forces that disturb what little stability it provided for traversing the chasm that has appeared between then - 29th October - and now - 26th January. So far I haven't actually fallen off; wobbled a lot, slipped a few times, even needed catching by watchful members of the family around me.

We have all been walking our personal tightropes, with greater or lesser experience and skill.

Everything is not as it seems. When I found this picture (googling away), I assumed that the man was poised high above the rooftops. If you go to the source, you will find that he is only a foot above the ground.

That is quite a good metaphor for our family: we have been undergoing a major, cataclysmic disruption to our lives. But the professionals all around us have seen it all before. Without wishing to reduce the impact of anything, or belittle any of the physical, emotional, and mental, pain and suffering that encompasses our family, this is their daily experience and work. They have a huge experience and reservoir of knowledge of what will ultimately prove to be the best way forward.

And the best news of all - we are now in the middle of making arrangements for my mother to return home in a few week's time, once the equipment has been ordered and delivered, and the "care package" - home visits by carers and therapists - is all in place. There were times when this never, ever, seemed anything but an impossible dream.
Posted by KirstenM at 14:51:00