We stayed in the Lake District when I was about ten years old, and climbed Scafell in the late Easter snow, 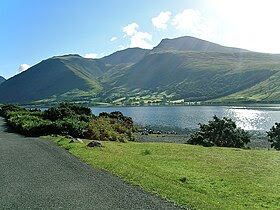 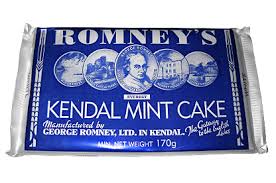 and visited the Lodore Falls. 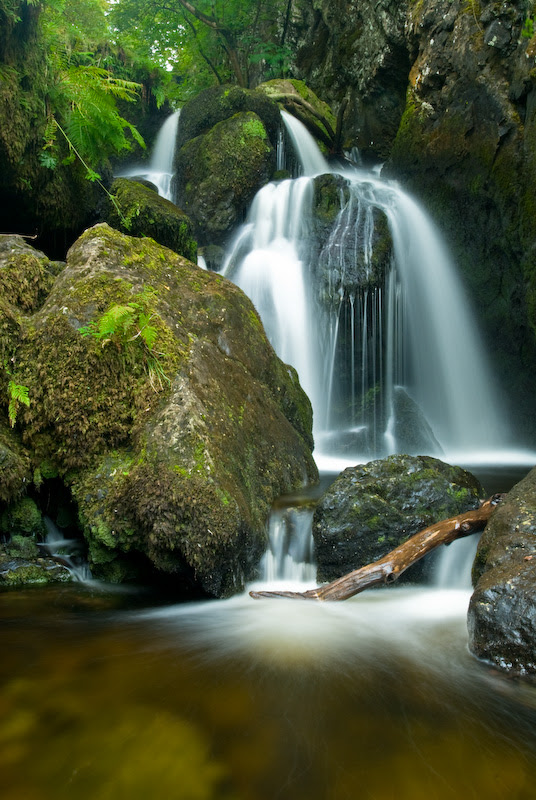 I have a feeling it might have been raining n the day we went to the Lodore Falls - my memory is very indistinct. I have an impression of a dark, damp, thundery valley full of slippery boulders and drenching spray. I have a feeling we were actually able to climb up over the rocks back then; it would have been sometime in the 1960s.

This morning -  well, it started yesterday morning - I found myself in the Vale of Tears. Grief for everything has arrived - for hopes, for dreams, for the futures imagined but which will not be as I wanted for me and my family.

I knew it would come sooner or later. For the most part I have managed to be strong, to keep it together, to give and give and give, and find and replenish my own stores of resilience in order to give again.

I wanted to post about being in the Vale of Tears, and feeling like a human waterfall. I was looking for a suitable illustration, but I wanted a British waterfall, not some huge and grandiose African or American one. I Googled for waterfalls in the Lake District, and that's how I unearthed this memory f that holiday all those years ago.

So now my personal waterfall has ceased, and I am replenishing my inner well of happiness ready for the next time with a reservoir of good things. Sunshine. Real Coffee. Happy Memories. Beautiful Scenery.


"The Cataract of Lodore" is a poem written in 1820 by the English poet Robert Southey[1] which describes the Lodore Falls on the Watendlath Beck just above Derwent Water in Cumbria, England. The poem is a masterpiece of onomatopoeia, employing some of the most clever and evocative language ever used to describe a natural feature. When seen in its entire form, the body of the poem does look like a waterfall. 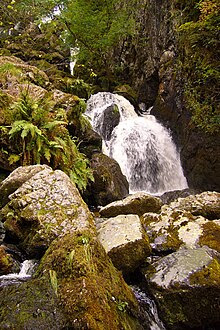 "How does the water
Come down at Lodore?"
My little boy asked me
Thus, once on a time;
And moreover he tasked me
To tell him in rhyme.
Anon, at the word,
There first came one daughter,
And then came another,
To second and third
The request of their brother,
And to hear how the water
Comes down at Lodore,
With its rush and its roar,
As many a time
They had seen it before.
So I told them in rhyme,
For of rhymes I had store;
And 'twas in my vocation
For their recreation
That so I should sing;
Because I was Laureate
To them and the King.

From its sources which well
In the tarn on the fell;
From its fountains
In the mountains,
Its rills and its gills;
Through moss and through brake,
It runs and it creeps
For a while, till it sleeps
In its own little lake.
And thence at departing,
Awakening and starting,
It runs through the reeds,
And away it proceeds,
Through meadow and glade,
In sun and in shade,
And through the wood-shelter,
Among crags in its flurry,
Helter-skelter,
Hurry-skurry.
Here it comes sparkling,
And there it lies darkling;
Now smoking and frothing
Its tumult and wrath in,
Till, in this rapid race
On which it is bent,
It reaches the place
Of its steep descent.

The cataract strong
Then plunges along,
Striking and raging
As if a war waging
Its caverns and rocks among;
Rising and leaping,
Sinking and creeping,
Swelling and sweeping,
Showering and springing,
Flying and flinging,
Writhing and ringing,
Eddying and whisking,
Spouting and frisking,
Turning and twisting,
Around and around
With endless rebound:
Smiting and fighting,
A sight to delight in;
Confounding, astounding,
Dizzying and deafening the ear with its sound.

Collecting, projecting,
Receding and speeding,
And shocking and rocking,
And darting and parting,
And threading and spreading,
And whizzing and hissing,
And dripping and skipping,
And hitting and splitting,
And shining and twining,
And rattling and battling,
And shaking and quaking,
And pouring and roaring,
And waving and raving,
And tossing and crossing,
And flowing and going,
And running and stunning,
And foaming and roaming,
And dinning and spinning,
And dropping and hopping,
And working and jerking,
And guggling and struggling,
And heaving and cleaving,
And moaning and groaning;

And glittering and frittering,
And gathering and feathering,
And whitening and brightening,
And quivering and shivering,
And hurrying and skurrying,
And thundering and floundering;

Retreating and beating and meeting and sheeting,
Delaying and straying and playing and spraying,
Advancing and prancing and glancing and dancing,
Recoiling, turmoiling and toiling and boiling,
And gleaming and streaming and steaming and beaming,
And rushing and flushing and brushing and gushing,
And flapping and rapping and clapping and slapping,
And curling and whirling and purling and twirling,
And thumping and plumping and bumping and jumping,
And dashing and flashing and splashing and clashing;
And so never ending, but always descending,
Sounds and motions for ever and ever are blending
All at once and all o'er, with a mighty uproar, -
And this way the water comes down at Lodore.
Posted by KirstenM at 08:49:00