I've had a very happy week so far.

I've cleared yet more niggling tasks, many not even anywhere near the "to-do" list but still needing doing.

Stupid, piffling little things that were really getting me down.

I've cleaned the outside of the kettle. Because it is beside the cooker, it gets spattered easily, but somehow I'm always rushing on to the next thing rather than taking five minutes to wipe it down. (I also cleared and cleaned that complete corner, decrumbed the toaster, chucked a couple of broken kitchen utensils and recycled a surplus-to-requirements coffee tin.) It didn't take that long, really. 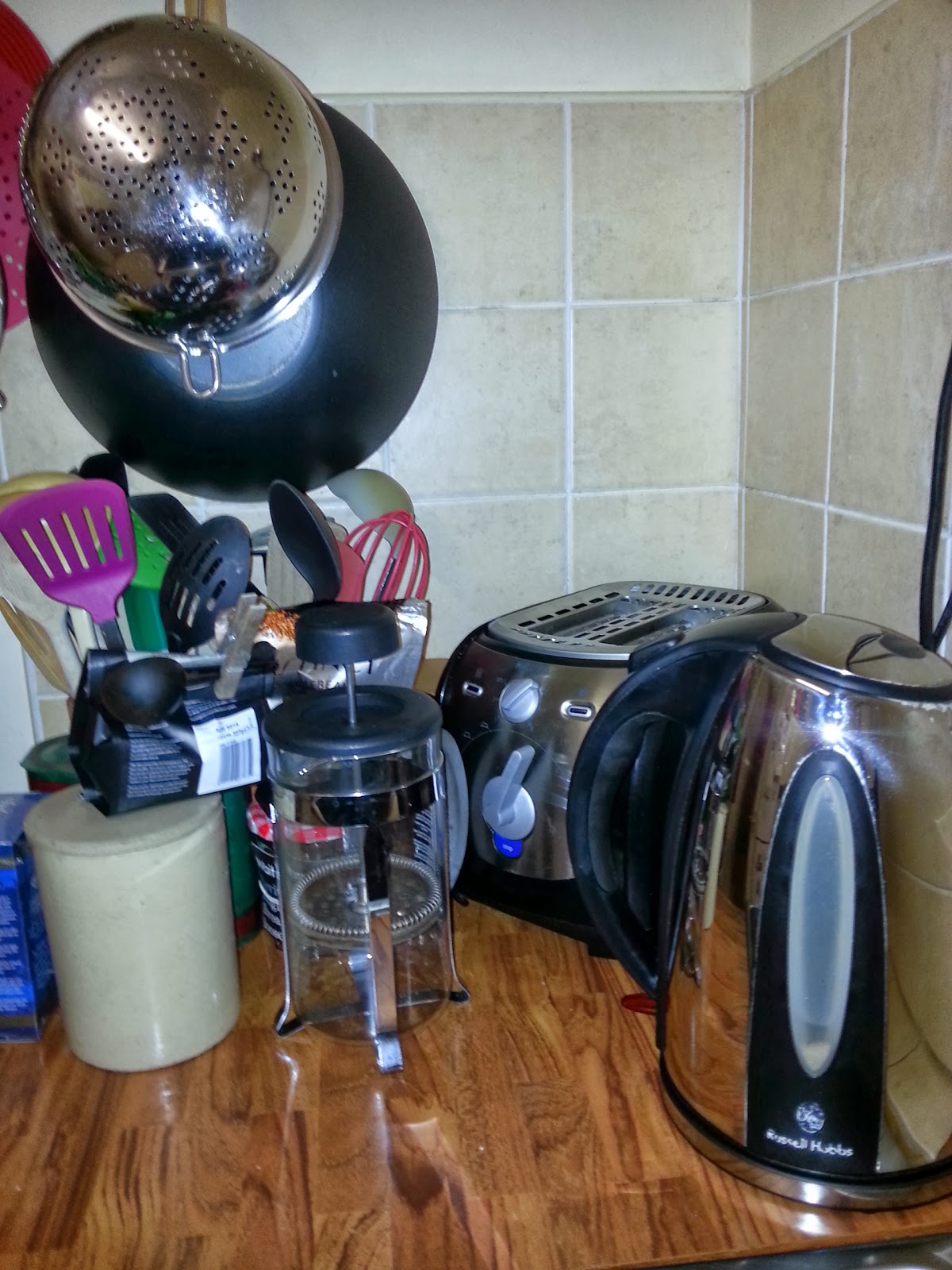 What a difference! My spirits rose every time I made a cup of tea or coffee!

Then there was the horrible hell-hole of the-cupboard-under-the-sink. It is where the bin and the cleaning potions and some plant holders and some vases fight for space. Every time I threw something in the bin or delved for the laundry liquid I was disgusted at the grimy vision that was revealed.

And we had had MICE. Our cats are useless at dealing with mice. I think they just like to loll about in their warm soft fleecy beds and watch the mice scampering about.

Anyway If cleanliness is next to Godliness then I was further away from Heaven than I could bear. Then, yesterday afternoon, a piano pupil did not come because she was ill. Suddenly, I came over all energetic, donned the old marigolds and went in. Everything came out, and half-an-hour's vigorous application of BANG! POWER DEGREASER solved the unsanitary situation. The next pupils arrived, and after their lesson, the cupboard was dry and everything could be put back again, apart from some dodgy eco-oven cleaner which didn't work, some window cleaner with vinegar which was a most peculiar colour, some hob-brite which I threw out in principle because of the spelling, and a badly discoloured bottle of stain remover. Memo to self - chucking assorted kitchen cleaners down the sink is a BAD IDEA, although the drains are probably cleaner now than they have been for a while. 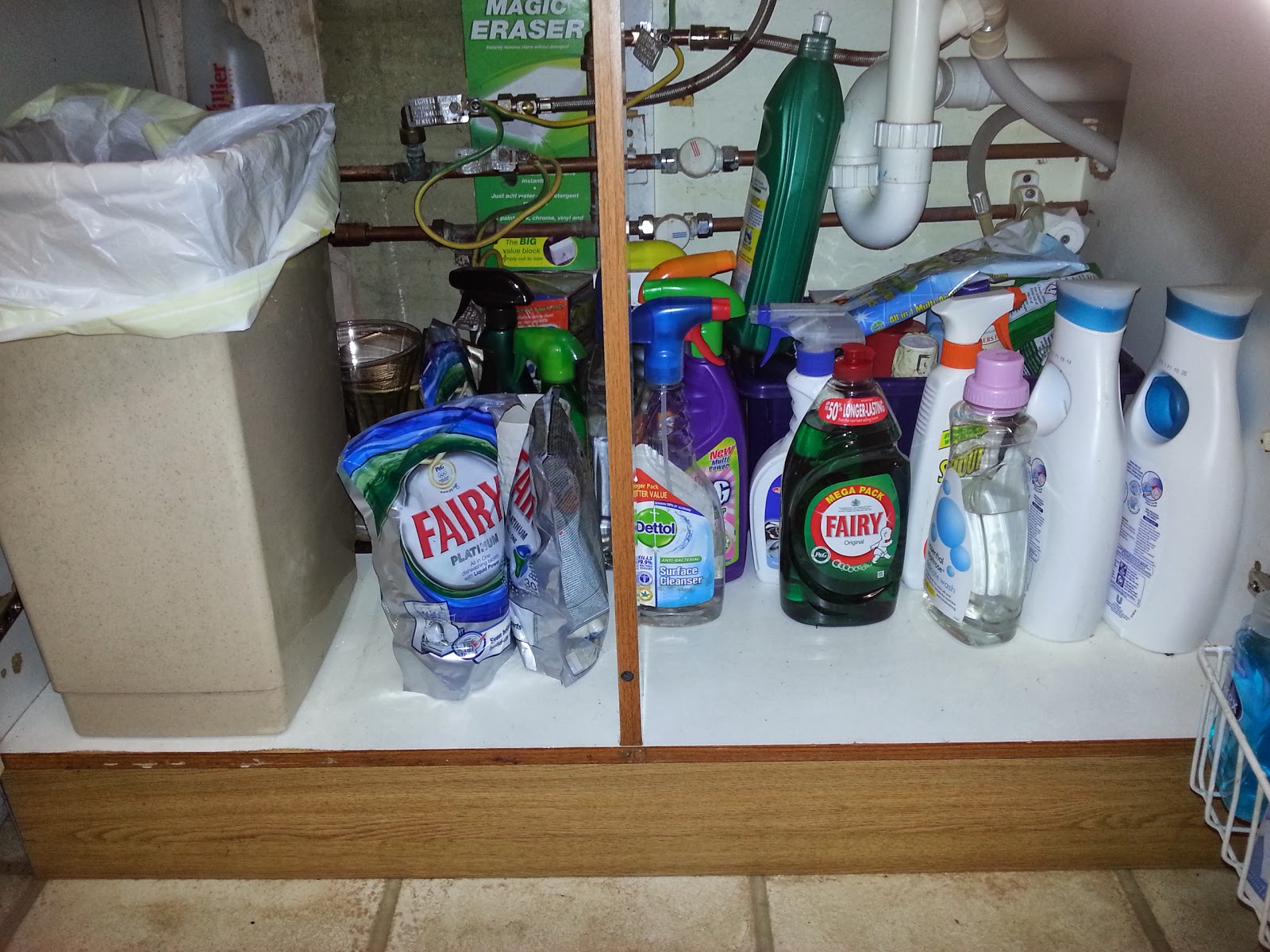 Notice that I have not sullied your eyes with "before" pictures. I was worried that some people might be reading this before the 9pm watershed, and I didn't want to be responsible for any resulting nightmares.

There have been other small portions of happiness. I found time to stick a couple of viola plants into the tubs of bulbs outside the front door. (All I have to do is remember to water them - but they are looking good at the moment).

I've cleared and cleaned the top of a bookshelf which is supposed to display some wooden boxes and puzzles, and had just become another surface for odds and ends and dust.

I've dealt with a series of small, but vital errands - arranging the piano tuner, arranging the tree surgeon/reclaim the garden from the jungle man, forwarding some mail, sending birthday cards, sorting some timetable clashes, creating a surprise for - oh, no, I don't want to give that one away just yet.

Little victories, but how happy they have made me!
Posted by KirstenM at 20:31:00