I won't give the plot away just in case you (like me) had forgotten it.

It is set in the Beirut and Syria of 1967, before everything changed.

I can remember stopping over in Beirut, the first time we flew out to Indonesia. That would have been in the winter of 1970. We all got off the plane into brilliant sunshine and unexpected heat to go into the transit lounge for a breakfast which included fried eggs, looking remarkably English in such a foreign land.

I was jolted out of the plot twice in the first few pages;

You'd never use a phrase like "Oh, it all went like a bomb..." to describe a successful trip through North Africa to Damascus these days. Too much has happened in too many places.

And how about taking a package tour to visit these romantic, ancient places? No thanks, not at present.

My grandmother never spoke of Petra without adding "rose-red city, half as old as time". I don't think I've ever followed up that quotation before;

"The site remained unknown to the Western world until 1812, when it was introduced by Swiss explorer Johann Ludwig Burckhardt. It was described as "a rose-red city half as old as time" in a Newdigate Prize-winning poem by John William Burgon."

It seems no work of Man's creative hand,
by labour wrought as wavering fancy planned;
But from the rock as if by magic grown,
eternal, silent, beautiful, alone!
Not virgin-white like that old Doric shrine,
where erst Athena held her rites divine;
Not saintly-grey, like many a minster fane,
that crowns the hill and consecrates the plain;
But rose-red as if the blush of dawn,
that first beheld them were not yet withdrawn;
The hues of youth upon a brow of woe,
which Man deemed old two thousand years ago,
match me such marvel save in Eastern clime,
a rose-red city half as old as time.

Go here for lots of (creative commons) images. Like these 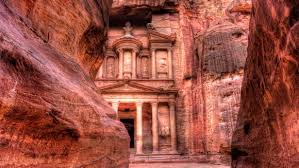