Finishing up WIPs (Works in progress) and UFOs (Unfinished Objects) is the bane of all people who make anything. I'm trying to deal with at least one of these every month, although I continually sabotage myself by starting something new.

This month I have started and finished a hat, twice, as the first time it was too big. (It is still too big; you may yet see it, knitted for a third time, on this blog in another month!) 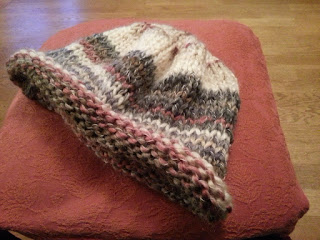 I have also finished a cushion cover. The knitting part was done a while a go, but I was dawdling over the sewing up part. However, the job is done. 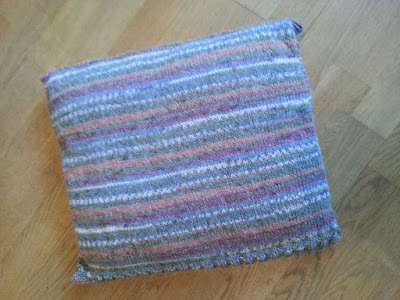 It replaces this patchwork cover, which I am rather sentimental about. 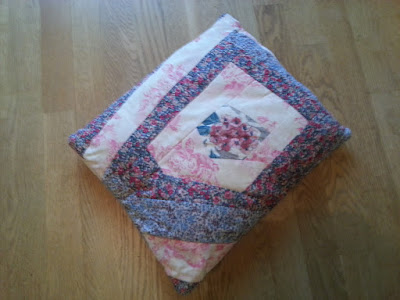 I used the pink and white fabric to make an enormous pair of dungarees for the hot sweater summer when I was massively pregnant with the daughter. The hydrangea in the centre came from a dress of my mother's, which she handed on to me more than thirty years ago. Unfortunately the fabric has disintegrated over time, which has had severe repercussions for the quilt I made with the rest of the dress. That quilt, which had been finished for years, has now become a WIP as I will have to place the rotted patches, or abandon the whole thing. The strip of blue-ish fabric is a Liberty print, made up by a favourite store in York, back in the day. I wore it as a bridesmaid's dress for a friend's wedding, forty years ago. It spent many years as a long skirt, and top before it went into the patchwork bag. The red flowery fabric was given to me by a good friend. It was a much loved Laura Ashley dress, and she had literally worn it out. There were enough good pieces in it for me to use for various projects.

The green jumper is now fully knitted, and half sewn together, as you have to join the pieces at the neck in order to knit the collar. It is now lying on a chair, in a great ominous heap of green, trailing tentacles of yarn in every direction and waiting for me to summon up the will to stitch the final seams. I guess it sort of counts as a finished item in one way (knitting) but is still a WIP. Still, I have another day left in February.

My final UFO to get done is a sort of destruction. Years and years ago I started knitting an Icelandic jumper for BB. I knew soon after I started that everything about it was going to fail - the body wasn't long enough, the colours were wrong, the sleeves were too narrow... so it sat there, sulking in a bag, still on the needles. I'd knitted too much to go back, and it really wasn't worth continuing. Yesterday, I Did the Deed and ripped it all out, rolling up the yarn and stuffing it into a clean bag.

It would have looked something like this: (and BB was probably that young when I started it!) 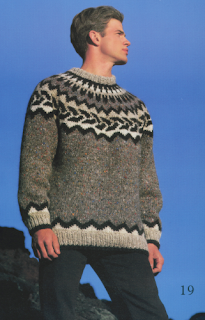 I'll make a start on a replacement sometime. I like knitting them as they are done almost completely on circular needs, with hardly any sewing.
Posted by KirstenM at 20:55:00