I did this one in my head as we were driving along yesterday...

This inspiration came from our visit to Copyhold Hollow on Thursday.

1.The pitying / indulgent looks given to me by one of the visitors and the owner of Copyhold Hollow when I admitted that I threw slugs over the back fence. It is not as bad as it sounds - we back onto common land, so I am not chucking them all into a neighbour's garden. But, as the other ladies kindly informed me, slugs are homing creatures. I knew that. Did you? I was just hoping that a good long distance lob over the wilderness at the back of the house would be enough to discourage them. Looks like 20m should do it - I'll need to measure to see how far I can throw them.

2.How else to get rid of slugs; "I think they should be killed as quickly as possible. After all, it's not their fault that they are slugs. I chop them into bits with my spade." so says one of the people in the bizarre conversation continuing from item 1 above.

3."I gather them in a bucket and feed them to the chickens." said the other lady. "Now that's a very sensible idea," replied lady number 1. I've gone off the idea of free range eggs from the garden gate. Although that's probably me just being a bit too sensitive.

4.Do you remember, back in the days when half-a-grapefruit for breakfast was the fashion, and you scraped away at the flesh with a blunt teaspoon and sprayed juice everywhere? And then everyone's flowerbeds had up-turned grapefuit halves here and there to lure slugs to their doom?

5.And beer traps - drowning them? What a waste of beer. Unless it was mass-produced chemical ales, in which case the slugs were welcome. They should have been more discerning in their tastes.

6.We went round a very beautiful NGS garden last summer, with a bed row of perfectly uneaten hostas under the hedge bordering the tennis court (it was that kind of house). In among the hostas were little terracotta houses, like miniature dolmens. There were slug pellets hidden inside... It all looked very decorative.

7.Not only do we have to contend with Spanish bluebells,


there are also voracious Spanish slugs to consider.


8.In fact, who knew that there are so many different slugs?

9.Slugwash Lane - we drove past a little country lane with this extraordinary name. Who used to wash slugs? With what? Why? You can buy £4,000,000 houses down there. Imagine paying that sort of price to live in Slugwash Lane?

10.Yesterday evening I covered the earth in my "kitchen garden" with this new-fangled sheep's wool pellets which is meant to dissuade slugs. While doing that, I found that a snail had taken up residence just inside the lip of my pak choi container. That would explain why so many of my pak choi were missing their newest, most tender leaves.
faugh - what a stink. I should have used disposable gloves.

But it seems to have worked - when I checked this afternoon the Pak Choi and spinack are looking no worse that they did yesterday. I didn't bother to cover the sping onions as they don't seem to be so popular. 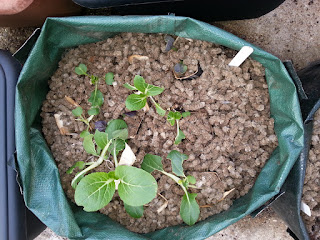 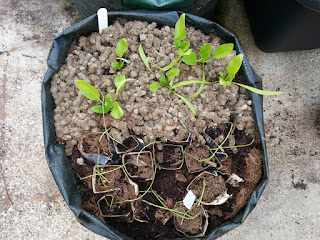 From a review; "Oh and until it rains you will have a delightful smell of Australian sheep farm ..."