Saturday 13th May - Two weeks pass in a flash

Where have I been? Well, here actually, but it's been a pretty harum-scarum couple of weeks.

Monday 1st May was a Bank Holiday - we didn't do anything much, as far as I can remember, (but I could be wrong...). It was very pleasant to be "unscheduled",

no, hang about, I remember, my father walked up on the previous Saturday afternoon when it was bright and sunny - why? was it just for a walk and say hello? Anyway, it came to supper time, and he took us to a local pub for steaks (I had sea bass), and a pleasant afternoon turned into a convivial evening. All the better for being unexpected and what's that word for "as a surprise" or "Off the cuff". I'm losing my vocabulary....

The following week my work was spent playing "catch-up" because all the Monday schools now had to be moved to Friday, and "could I go on another day because the school photographer was coming in" and so forth. My paper diary looks like a trendy modern scribble picture.

Last weekend - what happened then? We went round to a friend's, with our lawnmower, as their was out of action and the new one wouldn't be arriving for a while. In return for cake and tea and strawberry tartlets (oh yes indeedy, strawberry tartlets) we, or rather BB mowed the grass, while friend and I set the world to rights.

The week that has just gone past, was spent playing "catch-up", no, wait, didn't i say that about last week? It was the week of school SATS weeks, so, once again, morning schools got rescheduled or cancelled. That turned out to be a lucky thing; I was feeling a bit trepidatiorous about my car's handbrake. I have had the handbrake fail completely, when I was waiting halfway up a ramp to exit a car-park, and some impatient old buffer was tailgating me up the ramp. I had to sit and Think Very Carefully about how I was going to persuade my car to zoom up the ramp without rolling back onto the buffer's bumpers or rocketing out into the traffic at the top of the ramp. I did manage it, leaving a cloud of black smoke behind to blind the buffer, but it was a torrid experience. So, wondering if I was being a bit over-sensitive, I drove to the garage. It was quite pleasing to be told that yes, a new caliper was required. That feeling of satisfaction of being right was almost (but not quite) worth the cost of the repair.

I've planted out my sunflower seedlings, and so far the slugs haven't eaten them. 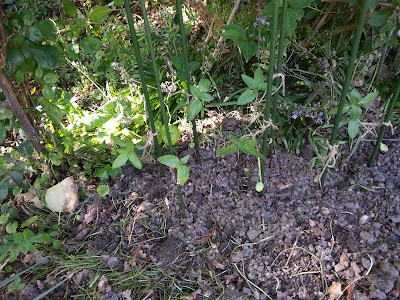 I've harvested a handful of spinach leaves, and one pak choi, and sown some carrot seeds, surrounded by tiny basil seedlings which I hope will keep the carrot fly away. This vegetable gardening thing is very exciting! This is what it looks like now; 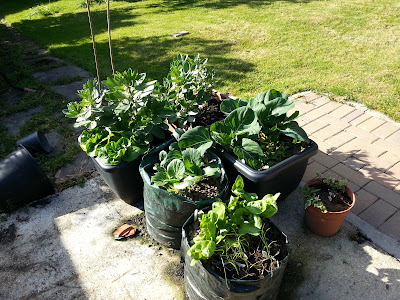 And here is how the bag nearest the camera (spinach and spring onions) looked at the end of April - what a difference. Totally amazing. The pellets are made of stinky wool - the smell goes after a few days - and do a brilliant job of keeping the slugs off. 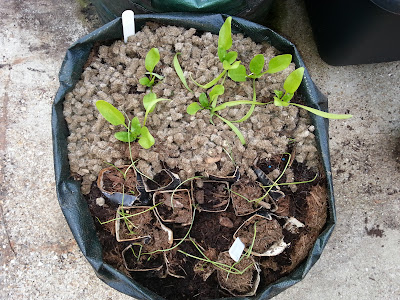 And here's the pak choi back in April - it is in the bag behind the spinach and spring onions. 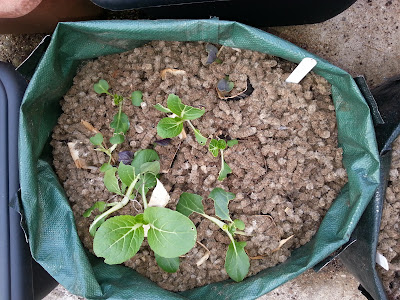 I've reached the weekend now, with all deadlines met, had tricky discussion with my boss about some of my work (that went ok), careful emails to parents who might, or might not have paid me for lessons (they had) and another potentially sticky situation also avoided. Apart from blog posts, and a couple of lesson write-ups, and a phone call to a parent to arrange the next lesson date, and some lesson plans to email in, and a couple of appointment times at my next hospital check-up to clarify, and a bit of re-organising in order to fit a zimmer frame in my car (I'm giving someone a lift to church, and she has recently acquired a zimmer frame) I think I may well be pretty much in the clear now - or is that a really, really foolish thing to say????

Roll on next week - it will be almost normal, apart from a music festival and a hospital check-up day causing the rescheduling of two schools and extra lessons to compensate for the day out of school.

This term is not going to run to a "normal" timetable until after the Halfterm break. So, harum-scarum is how it is going to stay for now!

Email ThisBlogThis!Share to TwitterShare to FacebookShare to Pinterest
Labels: cars, catching-up, gardening, music teaching, schedules, seeds, too much to do, vegetables