Let's lump all the days together in one post letter;

Tuesday was a long drive through England from Birkenhead to home. The weather improved as we travelled, and by the time we arrived at our front door I had discarded my warm fleece and my socks and we were feeling pretty roasted. I was cold almost the whole time we were away; the fleece that I took "just in case" became pretty much my second skin!

When we got home, it was just unpacking and putting away and sitting about.

Wednesday was more picking up the threads of home-life - collecting the cats and their remarkably smelly bedding from the cattery, laundry (including the cat beds, ugh) and shopping. All the NI clothes could go into the laundry - it was back to Summer T-shirts again for us!

Thursday I didn't bother to get dressed until it was time to take my father to the funeral of one of his friends, that way I didn't have to change! So a slow and sleepy morning, then find some suitable clothes. It is a strange thing to attend the funeral of someone who is almost a complete stranger. The only connection is that the "celebrant" turned out to be the same person who did my mother's funeral. That was disconcerting.

In the evening I got to my regular Thursday get-together with a couple of dear friends. I more or less finished the scarf I had been knitting in N Ireland while we nattered and knitted or did whatever we were doing.

Friday. That was a Royal Brompton Hospital day, up in London. The lung function appointment wasn't until the afternoon, so we went to visit Carlyle's House at 24 Cheyne Row. It is a delightful place, left as far as possible as when the Great Man (and let us not forget his wife, Jane) lived there.

They seem to have been visited by Everybody. Including Chopin, who played this actual piano; 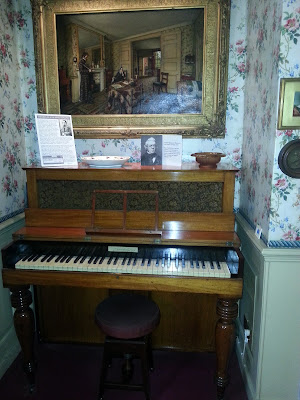 and now I have played it too. (It is dreadfully out of tune and clearly needs some work; the guide had given me permission to try it, but very soon said "I think that's enough now").

Himself was very taken by Mr Carlyle's Reading Chair and has spent some time considering the possibility of adding an adjustable reading desk to his own leather chair. 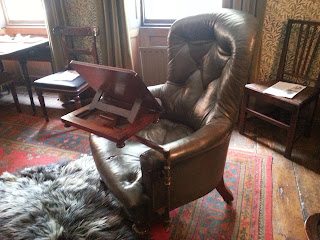 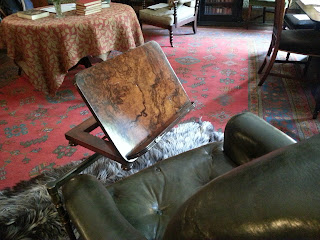 I was very grateful that the outside privy has been brought up-to-date, and is in perfect working order. 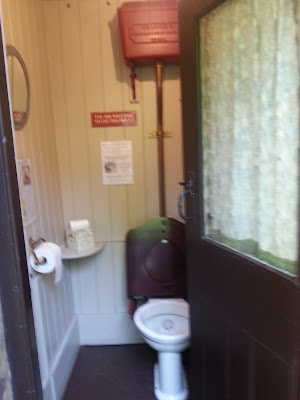 (The red notice states "You are welcome to use these facilities". So I did.)

We spent some time mooching along the Kings Road and then back along the Fulham Road to the hospital. Lung function tests are just a matter of breathing in and out of a mouthpiece on a complicated bit of equipment. But it is all in how deeply, or how quickly you breathe, whether you switch from "in" to "out" all of a sudden or hold your breath in between... so it takes quite a few goes to get the "technique" right, and then you have to be able to replicate the results. Once that was all over, and I had a mega plaster stuck on one ear where they had taken a blood sample ("sharp stab" - they weren't exaggerating) we repaired to Daunts Books (my favourite bookshops) on the Fulham Road and then to a coffee shop to recover. I bought Stephen King "On Writing" which has been on my list for a very long time.