The first lot, grown from seed a hundred years ago in the Spring, were eaten by slugs, but the second lot are making a brave attempt to flower; 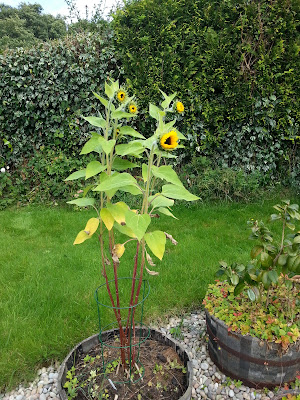 By the time I got round to planting them out, their roots were matted together, so I just thrust the tray of earth into a tub which is full of daffodil bulbs, added some more earth and a support and hoped for the best. I might try a similar method of ignorance and brutal neglect next year. It worked much better than the tender loving car that the first seedlings received.

This white Japanese anenome is very important to me. It was given to me by a friend several years ago, and again, suffers from annual neglect. Well, Chris was a stubborn lady, hardy, self-sufficient, and full of admirable qualities, and this flower which, turns up long after the common pink anenomes are over, is constant and reliable in spite of my own forgetfulness. Like Chris. She died at the beginning of the year, and I miss her dearly. 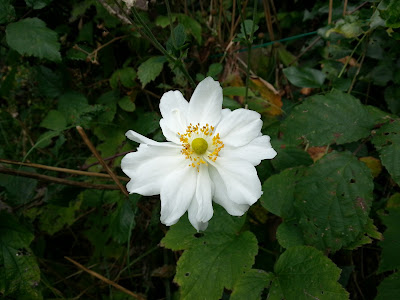 What about these roses? Himself "dead-headed" them - ie chopped them back by quite a length - in late Summer, and here they are again! (The "downstairs" cat is pretending not to notice the camera; note the artfully casual arrangement of paws and tail) 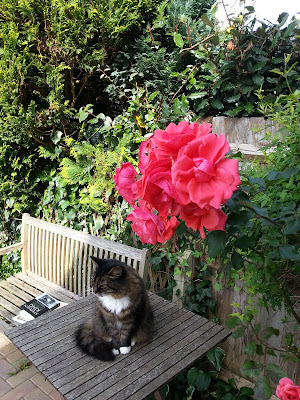 These last few days have been suddenly sunny and warm. Yesterday I sat out in the car park at Nymans Gardens to eat my packed lunch. The thought of the enclosed staff room on such a beautiful day was so unattractive. "Forest-Bathing" has become "a thing"; apparently there is scientific evidence to show that spending time in woodland has all kinds of health benefits; the quote below is from wikipedia. Apparently pine forests are best, because of breathing in


Forest bathing is the practice of taking a short, leisurely visit to a forest for health benefits. The practice originated in Japan where it is called shinrin-yoku (森林浴) in Japanese (it is also called sēnlínyù (森林浴) in Mandarin and sanlimyok (산림욕) in Korean).