More outings, before the half term week comes to an end

Another sunny day, another walk, this time round East Head at West Wittering.

Why have we never been here before? The tide was almost fully out when we started walking round the head (after an excellent fish-and-chip-lunch). The guide said the walk around the head would take about 45 minutes - maybe that is true when the tide is in, but we walked around a wide sweep of sand, sometimes along sandy strips that only appear at low tide. I took pictures -

we came onto the sand through that gap in the dunes, at the back of the beach huts. They have a great wall of sand blocking the front doors, and will to be dug out the next season 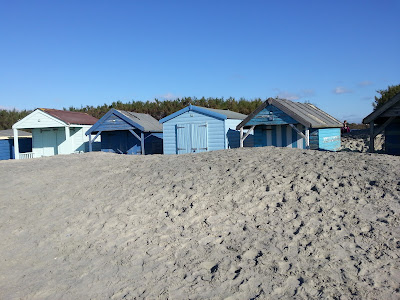 Did I mention the sky was blue? 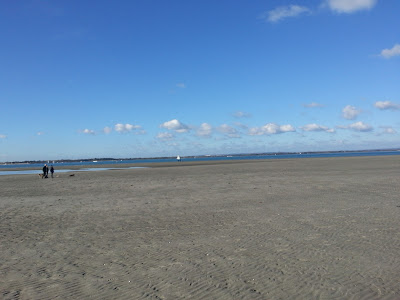 You would have to zoom in on the picture above to see, but to the right of the white sail of the yacht is the great chalk scar in the cliffs behind Portsmouth, at Portsdown Hill. We could just make out the bobble of the radar system or whatever it is on the top of the cliff.

Most of the sand was firm and easy walking, but there was enough soft sand and shingle to make us glad when we got back to the car. I had plenty of time to rest on the way home, as the traffic queues were tremendous, but the driver found it hard work.

Lunch out again - this time at Camelia Botnar. This is a charitable foundation which provides residential apprenticeships for young people, and gives them employment in the cafe, garden centre, and training them to make the pottery, ironwork, and furniture they sell.  Afterwards, I took the opportunity to visit the church, St George's, at West Grinstead, which advertises "prayer book services and four-part choir". It is a small church, down a long, neatly hedged lane leading you into another, hidden, secretive part of the country. So close to the main A24 road you could almost see it...

The church was locked, with an explanation that the organ was being restored to there were pipes everywhere. We shall have to go back...