Coming home in the early dusk, there they were, well, some of them, parliamenting in their building in the first of the two oak trees.

A week has gone round; days, nights, events, all in their allotted places.

Sometimes, when I am looking for a picture to illustrate this blog, I stumble across something Very Fascinating...

Have you come across a Volvelle before? Here's a picture and quote from wikipedia 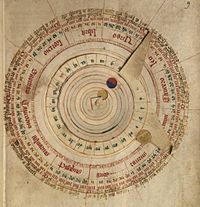 A volvelle or wheel chart is a type of slide chart, a paper construction with rotating parts. It is considered an early example of a paper analog computer.[1] Volvelles have been produced to accommodate organization and calculation in many diverse subjects. Early examples of volvelles are found in the pages of astronomy books. They can be traced back to "certain Arabic treatises on humoral medicine"[2] and to the Persian astronomer, Abu Rayhan Biruni (c. 1000), who made important contributions to the development of the volvelle.[3]

Well indeedy. And to see one in action, go here (which I recommend) and if you want to make your own, go here (to be boggled)
But the instructions do look pretty complicated...

Led Zepplin used a modern volvelle on the cover of their album Zepplin III; more wikipedia...

"The cover and interior gatefold art consisted of a surreal collection of seemingly random images on a white background, many of them connected thematically with flight or aviation (as in "Zeppelin"). Behind the front cover was a rotatable laminated card disc, or volvelle, covered with more images, including photos of the band members, which showed through holes in the cover. Moving an image into place behind one hole would usually bring one or two others into place behind other holes.