I might have gone to church this morning, through the early mist, but the friend who asked for a lift was unwell, and so, in the end, I didn't.

Instead,we (BB and I) embarked upon Gardening.

THE Lord God planted a garden
In the first white days of the world,
And He set there an angel warden
In a garment of light enfurled.
So near to the peace of Heaven,
That the hawk might nest with the wren,
For there in the cool of the even
God walked with the first of men.
And I dream that these garden-closes
With their shade and their sun-flecked sod
And their lilies and bowers of roses,
Were laid by the hand of God.
The kiss of the sun for pardon,
The song of the birds for mirth,--
One is nearer God's heart in a garden
Than anywhere else on earth.
For He broke it for us in a garden
Under the olive-trees
Where the angel of strength was the warden
And the soul of the world found ease.
Dorothy Frances Gurney
http://www.theotherpages.org/poems/gurney01.html


So now, at the end of the day, we have achieved this;

The bottom end of the garden. 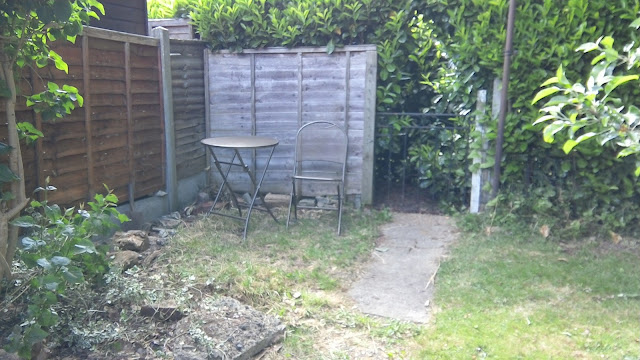 This is where the sun is, first thing in the morning, and we've had our eye on it for a breakfast area. I cleared the weeds from the corner (which he had already strimmed), together we moved a stray fence panel that was waiting for something to happen to it, I covered the cleared earth round the edged with bits of stones and so forth to discourage the cats from making use of it, and moved a table and chair down. The other chair will join it once the bird poop has been removed! This used to be an unsuccessful  vegetable corner so the earth is still quite soft; this can mean an unexpected change of seating angle as one leg of the chair suddenly sinks by several inches... The plan is to dig it out and cover it with a weed-proof membrane and similar pebbles to the ones by the house.

We've also discussed creating a path down to the public area behind the hedge. Pro- we can get out of the garden for a walk easily. Con- people can get into the garden easily. We used to have a way through the jungle, without any intrusive intrusions, so maybe it would be a good idea.

Working back along that side of the garden, is a border which is rather like Eyeore's Gloomy Place. Some parts get morning sun, the rest gets dappled shade if it is lucky. This patch, below, is one of the sunny patches. I have dug it over, and planted eight very ancient lily-of-the-valley bulbs which I bought I dunnamany years ago (ignoring the instructions to plant as soon as possible after purchase).
I've put them in the ground just behind the white plant label, watered them in and it is over to nature now.

I've also put in a bit of ivy I've been growing in a pot. The plan is for this bed to have shade loving plants (wood anenome, hellebore, cyclamen, ivy as grown cover, geraniums) and then wood bark on top. We shall see.

Talking of geraniums, you can just make out one of the two I bought last year in pursuit of these plans, in the bottom left hand corner of the picture. 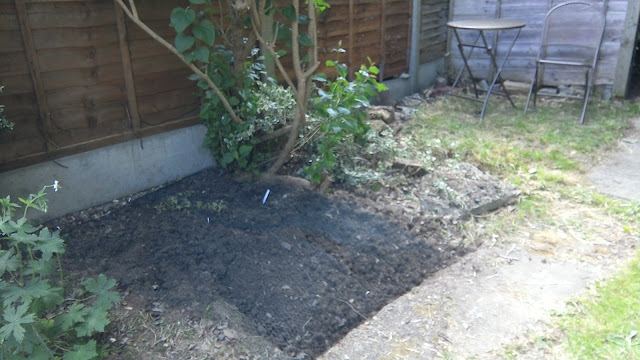 Here it is again; with small, delicate little flowers and quite a few buds. So it looks as though I might be on the right track with the planting. I looked through all the ones in the nursery, reading the labels to see which would be okay in shade. The other one is in a shadier area, and not ready to flower yet! 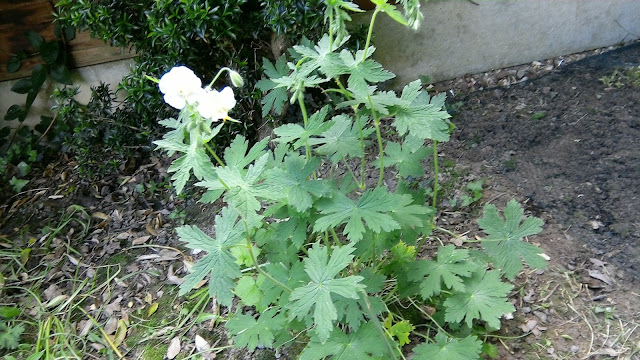 The vegetable garden is now up and going. I thought "going" was a better word choice than "growing" as there isn't much to see yet. Furthest away is a tub of lettuce leaves; himself bought one of those trays of "living leaves" from the supermarket last week, and I have planted the remnant to see if they will produce any more salad leaves. The other three tubs have been sown with spinach, radish and spring onion seeds, protected by the trimmings from the rosemary bush near the back door.

I have created the wigwams for peas and beans; I might have bought seedlings from the nursery this afternoon.... but I didn't. Maybe tomorrow? 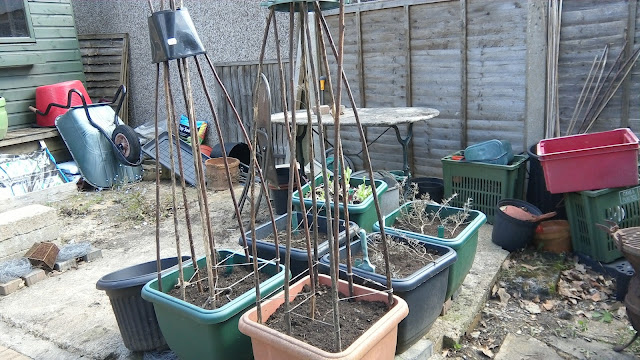 Himself set to work with strimmer and plant trimmer, starting at the garden bench. At the moment it looks like a newly-mown, parched meadow, rather than a tangle of grass and goose grass and goodness knows what else. 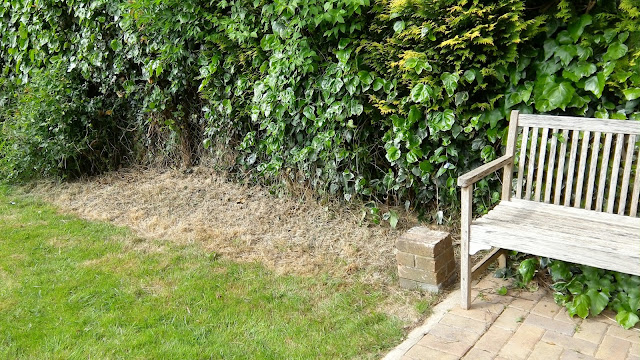 Strimming had to stop here; inside this tangle of vegetation are pink japanese anenomes, some precious white japanese anenomes (given by a friend who is no longer with us - every year I think they have dies, and so far, every year, they have reappeared) and another pink flowering shrub whose name escapes me for the moment. It will have to be carefully and painfully (mind the brambles and nettles) cleared by hand... 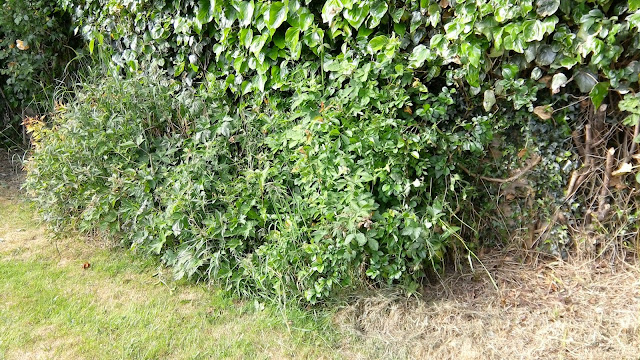 And onwards with the power tools! 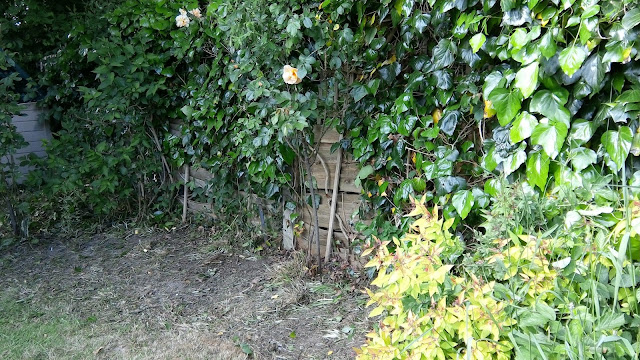 This section has been reduced to earth, but lo! what wonder appears through the jungle? A rose, beautiful pinky yellow, doing its best to survive.

It is going to take another couple of weekends to finish the back garden (let's not consider the front garden for the moment...) and I am looking forward to the finished result.