I've been rattling away on this keyboard all afternoon, apart from the occasional pause for a cup of tea - and I think it's time for one now. We've had to be a little careful with water all morning as somehow an 18" water main (imperial measurements?) burst over towards the next village, and the water pressure slowed to a trickle. It is back now. 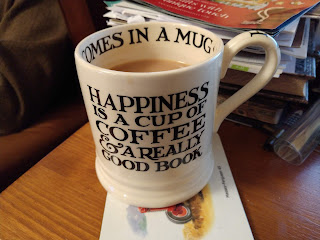 I got up just in time - another half hour and I might not have been able to move. As it was, I felt definitely creaky until I made it into the kitchen.

What was I doing all afternoon?

I'm a bit behind on my on-line creative writing course, so had to catch up with a couple of writing exercises. We are supposed to be setting ourselves up to write a short story in week 8 (this is week 6) of 750 to 1000 words. After five and a half weeks of how to create characters, we are now ready to plan The Story.

I'm keeping track of the various characters I've created so far on a new blog;

so if you are curious, now's your chance. I set it up because a friend who is a wonderful sounding board for all these ramblings said I should combine all the snippets into a magazine style format. Done.

What did I do yesterday?

Went with Daddy to a Masterclass on The Four Last Songs by Richard Strauss, given by Dame Felicity Lott at Champs Hill. It was most impressive. I'm not a Strauss/Wagner heavy on the Grand Emotion music lover, as a general idea, but as a friend who was also there said, it makes a difference 'when you get your ear in', as it were. It was definitely a handkerchief moment for the very final phrase;


Perhaps not so surprising, when I had been to a funeral the day before. Although the funeral was for someone I didn't feel any close connection to; more a case of supporting the family.

Much of the time this afternoon has been spent trawling through photographs to illustrate the various characters. I needed a scruffy dog, and had a couple of goes at drawing one. 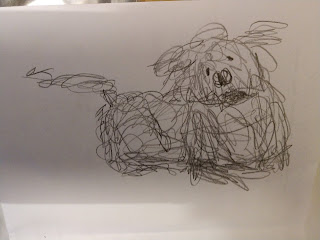 plenty scruffy enough, but too gormless, in favour of this one. 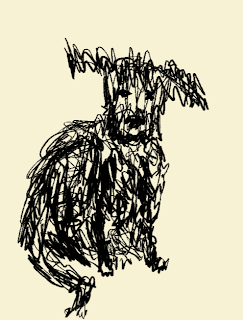 And I have been salvaging cuttings from a couple of flowering succulent house plants which are in their death throes from lack of water. I've no idea what colour flowers these will have when they grow up. They are from the plant in the back bedroom; 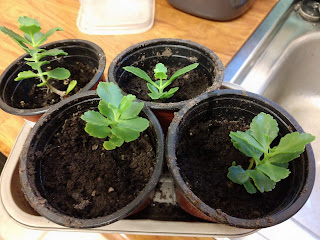 So far they seem to be doing all right. There are two more little vases on the bathroom windowsill of cuttings growing their roots. Guess what everyone will be getting for Christmas?