Yes, we have swapped out both the cars, the Vauxhall Corsa AND the Alfa something-or-other (I'm no good with numbers) for a wonderful little 4-wheel-drive Panda.

It is a cheerful little vehicle, with plenty if zip, and a neat turning circle. After picking it up, we thought 'where shall we go for lunch?'

Sheffield Park seemed a good idea, fairly close, Autumn colour.... and some kind of festival going ob, as we discovered after we had joined a queue of cars bumping cautiously over a rutted way leading to the overflow car park. It would have been a nightmare in the Alfa, first pausing and gentling the car over the speed bumps, and then rolling over the ruts and tussocks of grass, wincing every time the sump guard graunched on the ground - but no - we were in the Panda, and just serenely motored along. We eyed up how far we were from the exit, how many cars were already in the overflow car park, and just headed straight for the exit. With some many other people already there, lunch wasn't going to be easy.

Never mind. We picked up the fast road from Lewes to Brighton, and discovered the Panda really is as good as we had hoped for this kind of driving, and then headed up and past Devil's Dyke to a favourite tea room/cafe we haven't visited for over a year. Why not, if it is a favourite?

The car park area for Sedlescombe Farm was Unsuitable For Alfas because of the uneven surface, potholes, and the necessity for good ground clearance. But, we were in the Panda! So we swung into the lay-by bouncing a little over the potholes and un-phased by the loose chalky surface. We were able to sit in the sun, enjoy a pleasant lunch, and read enough of the manual to work out why that little switch had it's orange light 'on', and why we would want to keep it that way (Neither of us are keen on the idea of the car switching its engine off by itself at traffic lights).

I haven't got a picture of our car - just google White Fiat Panda and that's what it looks like.

I was very amused by the Fiat Multipla parked next to us; it has the most absurd handles on the insides of the doors. This is the best angle I could find on google; you can make out the strange grey handles. 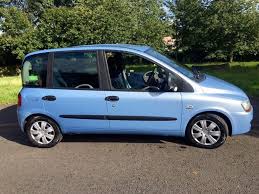 The owners of this one had found battery operated clip on lamps with beaded shades which were just perfect. But for some reason blogger is not letting me post a picture here.

I'll put one up next time.

Home then, to replace some of the piles of stuff removed from the old cars. We seem to have several of everything - first-aid kits, scrapers, yellow hi-viz jackets, car cloths....

We're still recovering from the dentist yesterday, although we were all lucky enough to just have check-ups and clean-and-polish. Even so, the anticipation, and the relief, makes for a tiring day. He has got a Proper Cold; something for me to look forward to in a few days? I hope not!