It was very odd, very sudden; this evening a student and I were in the middle of harmonising 'Away in a Manger' when there was a flash outside, as though someone had crept up to the patio doors (we hadn't closed the curtains) and taken a picture.

What was that? I was about to instigate intruder alert procedures (ie send Himself out to see off the burglars, guarded by the cats) when there was a roll of thunder and Rain Came Out Of The Sky. As in very wetly. Followed by hail? I don't know - I didn't go out.

I felt slightly sorry for the student when it was time to go home, but if he chooses to come to his lessons in shorts and a T-shirt and wearing flip flops, in November, then so be it. He only lives a score of houses away down the road. And his books at least were rainproof in the plastic wallet.

This afternoon I was teaching piano in a local school. I had to revise my timetable slightly, as one child was having extra 'memory and focus' practice.

I guess she will be needing a few more sessions?

They had created a poppy field in an area of rough grass between the classrooms; the poppies were made from the bottom ends of fizzy drink bottles painted red and stuck to short green canes. They all have labels - but I don't know if the label refers to a relative who dies, or the child who made the poppy...

This morning seems a long time ago. I did teaching, and dusted the mantelpiece, and then hoovered downstairs. I put up with the dust and fluff-bunnies for just so long and then the mental energy that gets used up in irritation at everything that need doing becomes greater than the physical energy of getting out the vacuum cleaner and doing something about it.

dusting ornaments is much easier using a clean, unused paint brush (the sort used for walls, not for watercolours)

leaving the hoovering until there is a substantial amount of crud to dump into the bin afterwards is very satisfying.


Yesterday I was so desperate for biscuits that I made some. It had to be a recipe that didn't need skill or eggs.

here they are waiting to go into the oven 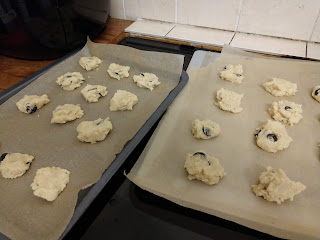 and fifteen minutes later, waiting to be eaten. 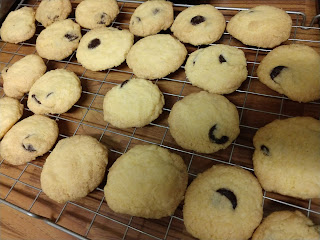 They are made with custard power as well as flour, and I pushed in some very dark chocolate buttons as well. HE doesn't like them, which is a pity as it means I may well end up eating all of them instead of only half.

I put 150g soft butter and 1/4 (English) cup of sugar and 7/8 cup of plain flour and 1/4 cup custard powder into the food processor and zapped it until combined. Then I tipped it into a bowl, mixed in the remains of a packet of dark chocolate drops and dolloped 24 heaps onto two lined baking trays. To flatten them, I protected my fingers with a scrap of baking paper - (I am a genius)

Twelve minutes in an oven pre-heated to 180C, and two minutes to firm up on the baking tray before lifting them off.

I am listening today's music; Shostakovitch Prelude for two violins and piano - bet you wouldn't have expected it to sound like this; so sweet, so melancholy.
Posted by KirstenM at 19:10:00