It's all been a bit 'full-on', this past week or so, and I'm very glad to have reached Saturday afternoon. I did have a 'time-out' morning yesterday, which will have benefitted the recorder pupils, drumming workshop people and piano pupils I encountered yesterday afternoon, evening and this morning!

I suppose it would be a good idea to go out for a walk - the sun is out - but it is cold out there and warm in here and already gone three in the afternoon. Tomorrow is another day...

Lent started without me, that is, in terms of pancakes. I usually make drop scones, rather than crepes, and pretend they count as they are almost Scotch Pancakes. And I usually don't get round to it until several days after Pancake Day, which is rather missing the point. So yesterday I entirely missed the point by making 'Eliza Acton's Rich Rice Pudding'  It's a cross between a delicious rice pudding and a delicious egg custard. The link I have used is a gluten-free recipe site - I'm not a gluten-free person, and the recipe looks exactly like the 'Delia Smith' I followed from my cookery book. 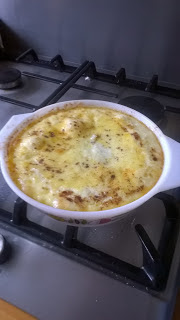 This is her picture (the gluten-free blogger) as we've more or less finished ours. But it looked pretty much the same. I'll make another ordinary rice pudding tomorrow as we seem to be over-blessed with milk at the moment.

I brought the iris bulbs out of the cupboard a few days ago. 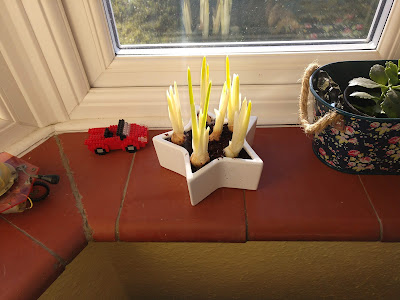 They had to be kept in the dark for ten weeks according to the packet. I hate being kept in the dark, can't abide not knowing what is happening around me. They have already lost their pallid look; the leaves are greening to a healthier shade. I hope they manage to express their gratitude at being released from the cupboard by producing flowers in due course.

There. As you can see, a rather ordinary post today. Unless you want to know about a couple of leaves falling from a pot plant into my bath, and looking so exactly like a Praying Mantis (I wasn't wearing my glasses) that I nearly leapt out of my skin and out of the bath, before common sense took over and I was able to scoop the leaves out and dump them into the bin. Praying Mantis indeed.