There were two items, but at the time of typing, I can remember only one - maybe the other will coe back to me...

Yesterday, while we were out, we missed a great dramatic event in our normally somnambulant street;

A magpie and a pigeon started a great fight as to who should perch on the top of our opposite neighbour's television aerial (luckily he was away; it saved him a lot of alarm).

The consequence of this epic struggle was that the pigeon became entangled in the aerial and the magpie flew off. (There's a moral in this somewhere).

Another neighbour phoned the RSPCA to effect a rescue; the RSPCA man-in-a-van called out the fire brigade. So there was a large fire engine (heaven knows how it managed to slalom through our road, which is usually cluttered with crazily parked cars) and men in gear and ladders. They managed to remove the aerial from the chimney and bring it down, pigeon and all, before disconnecting the pigeon from the appliance. RSPCA man took the pigeon (to eat, or to mend - who can tell?) and the firemen took the aerial back up the ladders and reinstalled it.

Maybe it was a useful training exercise and broke the monotony of a dull morning?

It was all over by teatime.

Oh yes, the other thing. I've remembered it now. We've solved the mystery of the grey car which seemed to be abandoned outside our house; 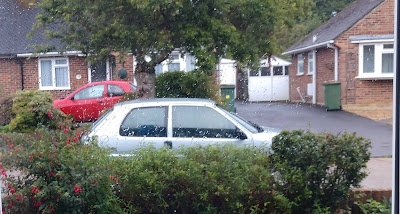 It had gone when we came back yesterday, but reappeared this morning just before eight. We watched from behind the curtains while a young lad did some texting or whatever, and then he got out at one minute to eight and walked briskly to the house where a huge loft conversion is in progress. So that's all right then. He's one of the workmen, and will only be parking there for another couple of weeks. I was rather surprised at how territorial I felt about the space outside our house...

In other non-news, it is raining, and has done so all day.