Still in Europe, but for how much longer? I don't even want to think about leaving. It has been such an ill-tempered, badly-thought-out, warped and distorted wrangle from start until - well, it's not finished yet.

If anyone comes trick or treating tonight I'm not sure what we'll be able to give them. I've eaten every scrap of chocolate, and we have no biscuits in the house. They can have a carrot - maybe that will help them see in the dark. I'm not a great Halloween fan, and I've never been trick or treating. Aha, I've just remembered - I think there may be some party blowers in the drawer left over from Christmas - just gone to check - yes. Good.

I've been at home all day. Luxury. Although I earned it by sending out invoices to the piano pupils. Then I discovered that I forgot that lessons at one school are meant to be £11 for twenty minutes, not £10. So I have diddled myself out of £25. I really can't be bothered - I made such a mess of last term's invoices that I'll live with the consequences.

The next big thing on the list is The Dreaded Tax Return. Ugh. One of the real pains is that my teaching year is September to July, and the tax year is April to April. I start a new register and folder and everything in September for the school year, and then have to wangle the information across two school years - which means two record books -  to get the figures. That's the bit I did this afternoon. I deserve chocolate.

Yesterday was a Major Achievement Day -  I stayed home then as well, and took on the kitchen floor. The kitchen isn't that big - I scuffled over it tile by tile, doing it pretty thoroughly, including the cupboard doors and the trolleys where the cats sleep and various things are stored. 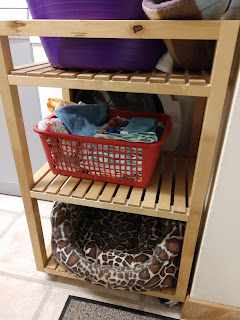 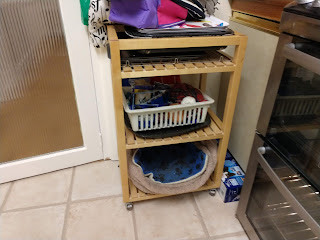 But then, because I was working at floor level, I came nose to nose with the oven door. I like stained glass as a concept, and would love to have some panels in the house. But maybe not the oven door, even though it had become a pleasant caramel/brown colour, as in a good creme caramel desert topping. Unfortunately it is meant to be clear glass.

And here's some useful information; if you coat the surface of the glass with neat fairy liquid, and leave it to do its stuff, adding more from time to time, the fairies in the liquid will soften up all the grease and a moderately light effort with the nylon scourer will deal with it in a most satisfying way. Even the little hard lumps of brown-ness gave way eventually. See, see, lookee, lookee in the second picture above. Looks like newish.

The piano is looking very clean and dusted - that's because the piano tuner came yesterday morning. However the dining room table has reverted to its usual state of overloaded chaos. Hey ho. We should up-size; down-sizing is never going to work for us. 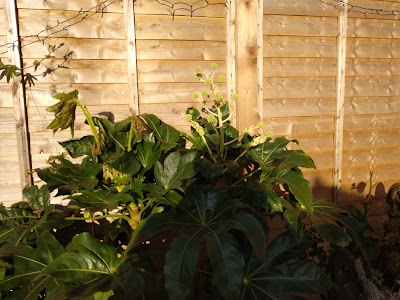 That picture is from yesterday afternoon. It was warm enough, just, for me to sit outside in the sun for half an hour with a cup of coffee; 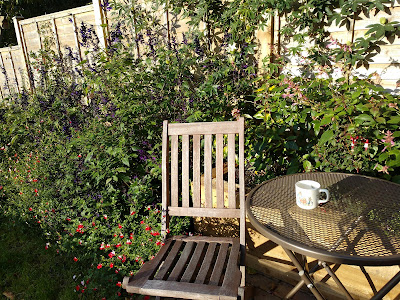 but I chose the chair that was further away from the triffid, just in case....

And now for 'show-and-tell'

I am immensely proud of having completed six hats for the 'Shoeboxes-for-Roumania' appeal; we will be packing them at church on Sunday.

These are crochet - I learned how to make them from youtube, and even how to start with a magic circle - whoop whoop. Our Canadian friends may notice the similarity between the smallest hat, on top of the pile, and a tea cosy in their possession... 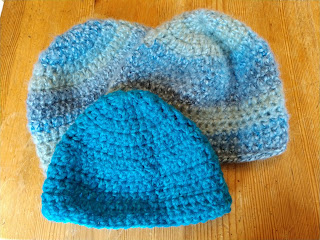 These are knitted. I switched to crochet after making these, as sewing up knitting is not a favourite activity, and knitting them completely in the round brings other challenges when you start decreasing the stitches. 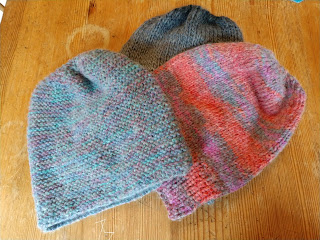 However, that's four lots of odds and ends of yarn used up, gone, removed from the house. Hooray and worth the effort.
Posted by KirstenM at 17:54:00