It's mostly through lack of sleep, as well as the cold and the cough and the sore throat...

I read for a couple of hours 'after lights out' a couple of nights ago, as my kindle has a backlight. I am careful to avoid shining it in his direction, and shield it slightly with the duvet. Oh, those memories of reading under the bed covers as a child, as the torchlight changed from white to yellow, and then flickered to nothing just the most exciting part of the story got under way... I was propped up on three pillows - impossible for sleeping, but helps prevent coughing.

Last night I dozed off to Neil MacGregor's podcast called 'Living with the Gods'. It is very interesting, but also soporific, especially if the volume is slightly too low. I started listening to something about the mystical meanings of sunrise, but didn't get very far in. At least I managed to sleep for a couple of hours at a time before spluttering to wide awake and coughing and so on.

But every day, in every way, I am actually getting a bit betterer and betterer.

I took this morning in bed - breakfast in bed AND lunch in bed - we shall sleep among crumbs tonight, no doubt!

Today's reading included a book called 'How to draw without talent' -  a sort of drawing course which I follow from time to time. - and I did quite a lot of talentless drawing. Also watercolours, which takes some concentration when sitting up in bed as you need to be very sure where the water bottle is at all times.


The pages of the book I painted in below, are much too thin for paint - who cares. That's what all these fancy these elastic bands are for - uncrinkling your pages of course. 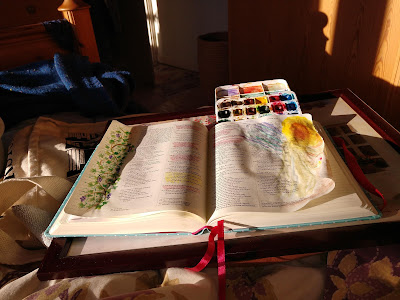 Kindle is a terrible temptation. I've now downloaded and read the whole of the Robert Carey series by P F Chisholm, and she's left a cliff hanger at the end of the last book, but not yet released the next episode. Some terrible has happened to Lady Widdrington, and Sir Robert is flying in the face of providence to the rescue - no, not literally flying because it is about 1590 and they haven't got helicopters yet - He's galloping to the rescue. I think it is all her horrible husband's doing, and that suspicious man they met 100 pages before is a witchfinder and the good Lady Widdrington is to be tried as a witch. I hope her ghastly gouty husband gets what's coming to him after all these books. Watch this space - for about a year -

As I can't follow Robert the Courtier on his next adventure, I have downloaded 'The Bird in the Tree' by Elizabeth Goudge for gentle reading. Only 99p - cheaper than Oxfam. She lists all the flowers that grow in the marshes as although I know the names I don't know what they look like.

Rather than just look them up, I copied them (very approximately) 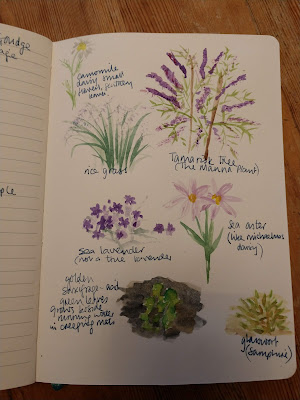 The book was written in 1940, so is very old-fashioned - and set in a most wonderful fairy-tale country house based on Harewood House (now demolished) near Bucklers Hard.

I've also turned some of these coloured blobs into birds - an idea from a youtube
video. 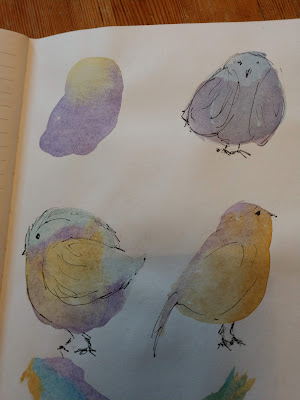 I have resisted downloading 'Rewilding Yourself' by Simon Barnes. I had a look at the free sample, though, and it is definitely going on the list. I now need to look up some butterflies that he discusses...
Posted by KirstenM at 16:07:00