This is all a bit unexpected. That is, if you were expecting family news and chit-chat.
A couple of days ago I posted this on facebook - it's the last of the July series of daily watercolour sketches. 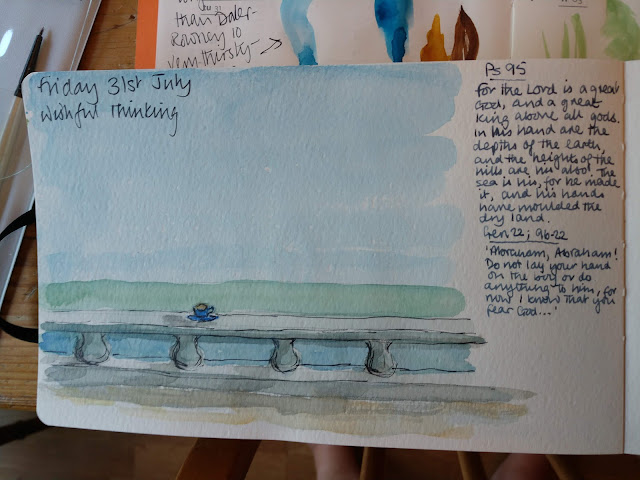 The Bible passage from Genesis attracted some comments from a friend -
'why had I chosen this passage?'
'because it was the set passage in my book for the day - I did try and wriggle out of posting it, but decided that would not be truthful'
To which he replied
'But the old man would not so, but slew his son,
And half the seed of Europe, one by one.'
This turns out to be from a sonnet by Wilfrid Owen, which I find completely stunning

The Parable of the Old Man and the Young

So Abram rose, and clave the wood, and went,
And took the fire with him, and a knife.
And as they sojourned both of them together,
Isaac the first-born spake and said, My Father,
Behold the preparations, fire and iron,
But where the lamb for this burnt-offering?
Then Abram bound the youth with belts and straps,
and builded parapets and trenches there,
And stretchèd forth the knife to slay his son.
When lo! an angel called him out of heaven,
Saying, Lay not thy hand upon the lad,
Neither do anything to him. Behold,
A ram, caught in a thicket by its horns;
Offer the Ram of Pride instead of him.

But the old man would not so, but slew his son,
And half the seed of Europe, one by one.

various words threw themselves at me as I read and re-read the lines;
fire and iron
belts and straps
parapets and trenches
transforming the scene from a story in long-ago biblical times to the very present reality of the Great War, the war to end all wars
a time when National Pride, the Empire, Sovereignty, was all-important...
As time has passed things have changed shape and size and form, and ideals  like nationalism, and empire building and world-beating - especially the phrase 'world-beating' which seems to be spouted forth at every opportunity -  become more distasteful compared to cooperation, sharing resources, compassion.
Serious stuff. Serious times.
Posted by KirstenM at 11:05:00

Email ThisBlogThis!Share to TwitterShare to FacebookShare to Pinterest
Labels: Churchy things, poem, thinking too hard and asking too many questions