As in it has been raining aaaaaaalllllllll day.

Eight days since my last post - what has been happening? Oh, well, this and that...

The Big Social Event was a friend's daughter's wedding. The 'rules' were changed just in time for her to have 'real musicians' at the wedding and for the reception to be a little less tightly constrained - so what was always (don't laugh, people who know exactly how many hitches and slips there nearly were along the day!) going to be a good day became a better one. We were able to join in via a livestream broadcast on youtube - wonderful. 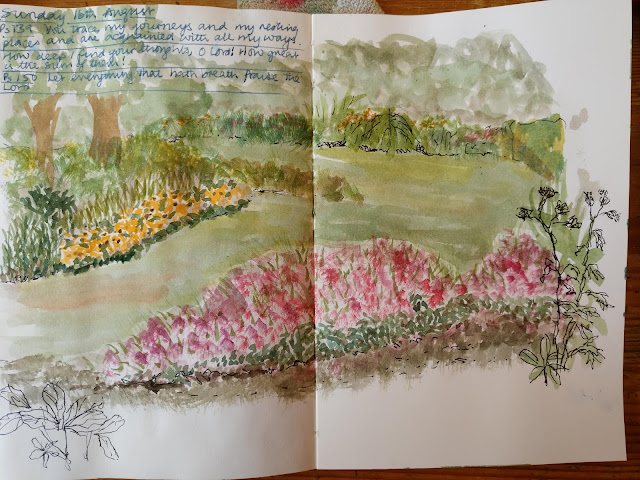 It was rather a dull morning (we skipped zoooooom church) but I got to do sketching, sitting on a bench surrounded by flowers while Himself strolled around at a slightly faster pace than I do these days.

Our timing was superb - it started to rain just as I was more or less finished, was raining properly by the time we got home for a late lunch.

The next day was much brighter and we went to see the sea; 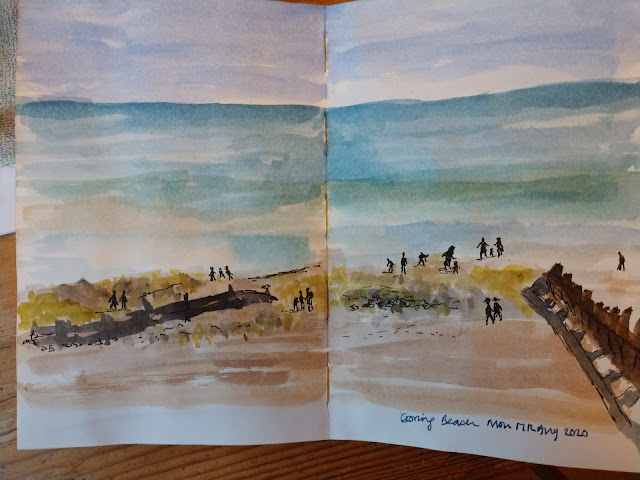 a brisk wind was blowing so painting has hampered by firstly forgetting to bring bulldog clips to hold the pages down, and secondly the paint drying within seconds of it hitting thenpaper (I'm still using the book with the 'thirsty paper - I will finish it, come what may, by the end of August and start a new book in September.

The tide was going out, so I managed to paddle in the sea, walking over brownish sand studded with little stones like currants. Going barefoot up the shingle bank wasn't so much fun - very prickly stuff, shingle.

I've been enjoying the 'painting-a-day' project; 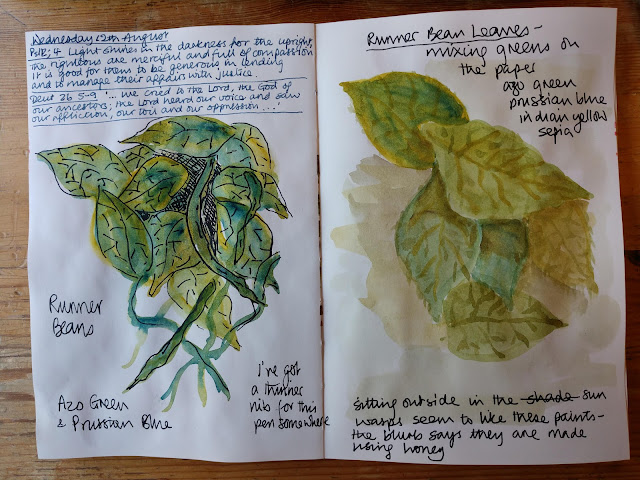 And also this (copied from a book) as a wedding card 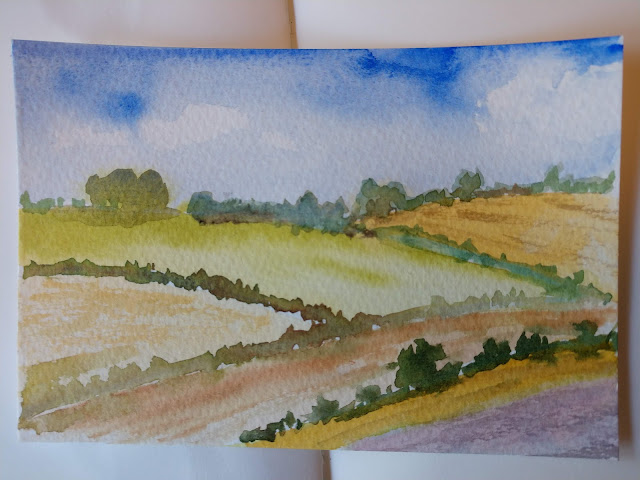 Thursday 13th - flowers in the border, painted standing up, using a waterbrush 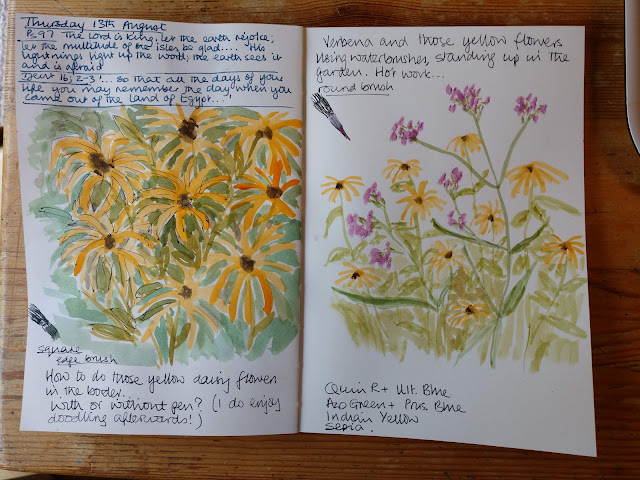 Friday 14th - Gerberas, a present from some children I teach 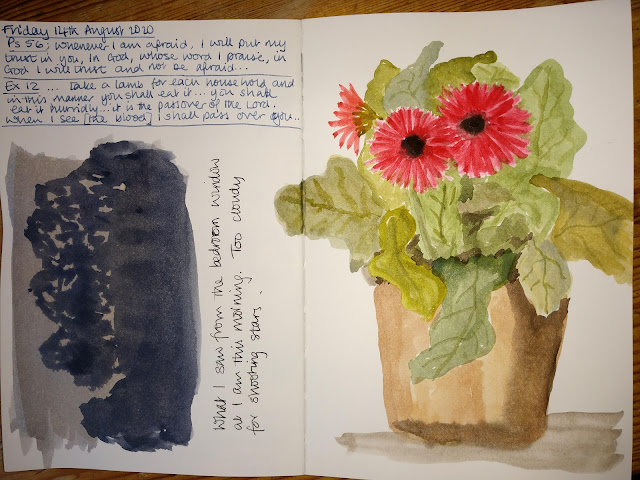 Satruday 15th - I was looking through the windows, didn't go out. 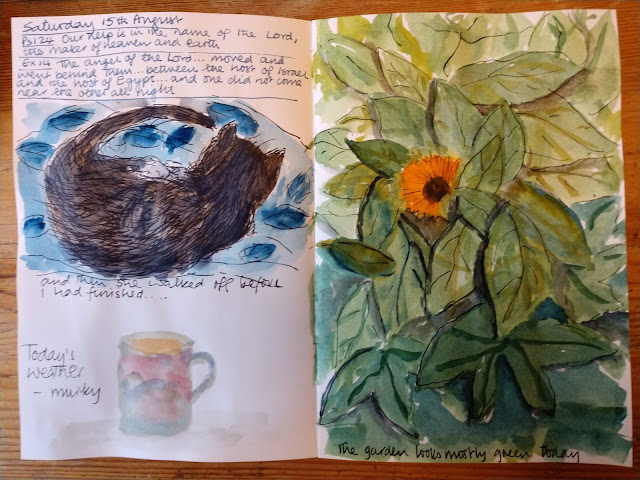 Sunday was the Gardens
Monday 17th various tubs in the garden 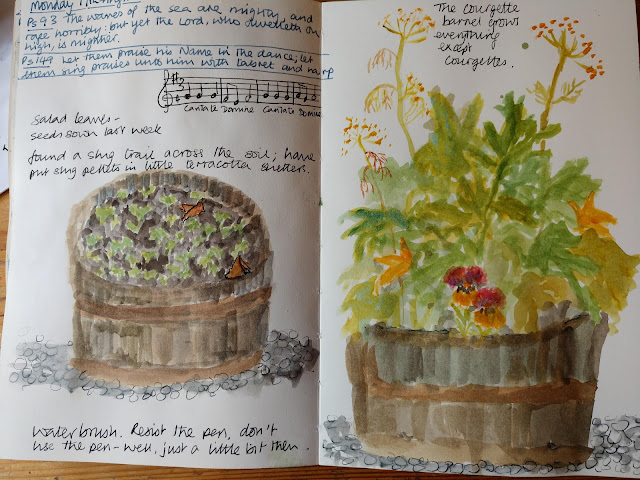 Tuesday18th more vegetable tubs, before I picked the tomatoes 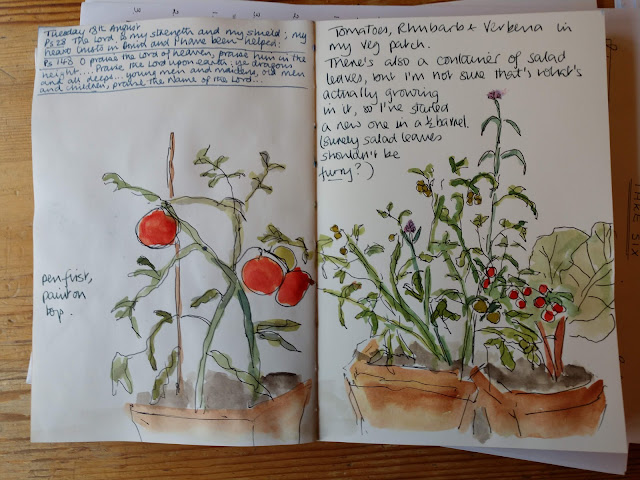 Wednesday 19th August to day is a frabjous day - a new brush I ordered, having seen reviews and watched someone using it, arrived - actually, it cam a day or so ago, but we leave things 'in quarantine' for a couple of days. 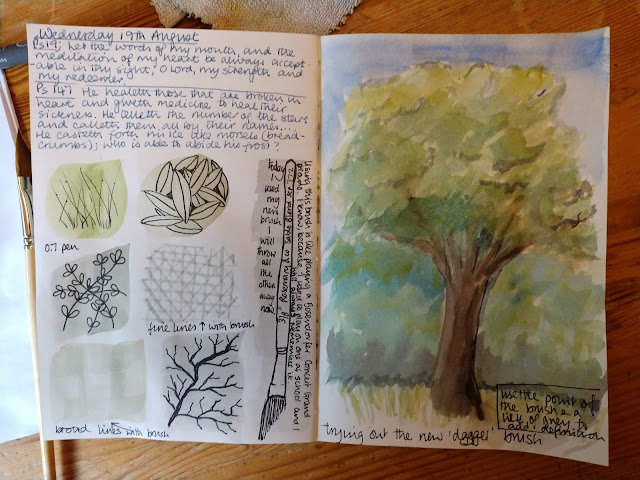 It is amazing. It reminds me of the first time I played the concert Bosendorfer piano at school (the best thing at that school for sure) and I discovered that there are pianos that make everything you try and do 100 times easier, and 100 times better. It reminds me of the time I bought a new bow for my cello, after over 40 years, and discovered that a right bow transforms the sound you make, and how easy it is to play - if I had had that bow when I first got the cello everyhing might have been very different.

I've been playing with the brush off and on all day; 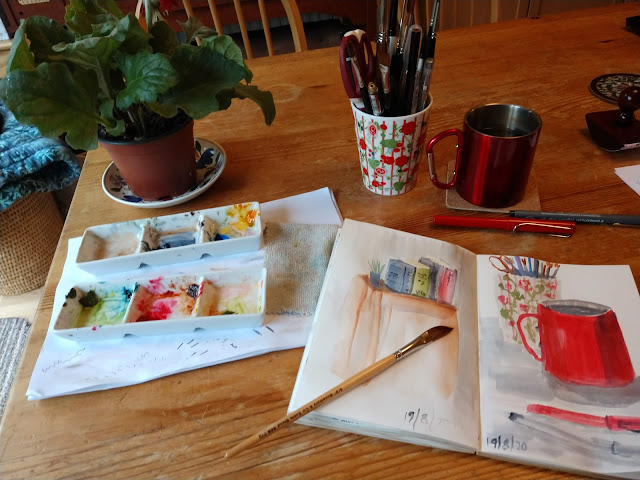 and also ordered a travel version to take when I am out and about.