I reckon that if I am posting to the blog at 7 in the morning it can count as yesterday's post for NaBloProMo purposes, which means that so far I have only missed one day - probably a record. But there are still a couple of days to go...

Yesterday was a most confused day

I had six people calling round with birthday cards and flowers and presents and cakes - did I mention it was my birthday?

Two Jacquie Lawson ecards - they are always so lovely.

I opened a huge number of parcels all in cardboard packaging; this was full of surprises as all the deliveries for the previous weeks or so had been stacking up in the hall as it was impossible to be sure which were things that I had ordered (stationery, Christmas presents, clothes) and which were birthday presents. In the end I had two packages from my daughter, two from my son, two from my husband, and also opened a Christmas present from my husband to me (handed it back in a hurry) and some books I had ordered as Christmas presents for him (repackaged in a hurry) 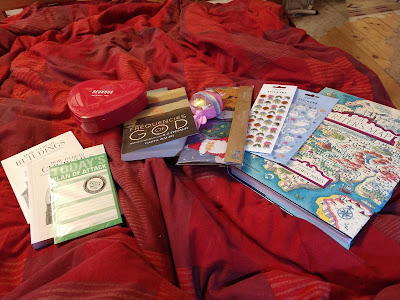 The red heart tin of chocolate contains ten individual pralines - perfect. That will be one each for me and husband to keep us going until we can get going on our Advent calendars.

All of this celebration was interwoven with a series of phone calls, emails and texts to and from close family as my father is currently in hospital (not covid, but equally concerning) and decisions were needed regarding the best way forward, and to let people know of the situation. First thing in the morning things were looking a bit bleak, but there was a unexpected opportunity for the best option (a surgical intervention)  to be followed through and the day ended better than it started. More phone calls and emails were needed... but on a happier note.

It's not surprising that my head was spinning by the end of the day, when I first had a zoom meeting with our children, and then joined a book group meeting later in the evening. One of my presents had been a mini bottle of sparkling rose - I drank it all during the book group which is probably why one of our members commented that my book suggestions were becoming increasingly random...

Anyway, I have started reading our new book, 'A Long Way to a Small Angry Planet' by Becky Chambers. Not one of my random suggestions, but a response to the question 'why do we never read science fiction?' from one of the others. I have read this before but am very happy to read it again.

Our previous book was 'A Shepherd's Life' by James Rebanks, and before that 'Girl, Woman, Other' by Bernadine Evaristo. No-one can claim that we always read the same sort of books...