Friday 6th November - That could have been very different

This morning started fairly alarmingly disgustingly - scroll down to after the asterisks and the picture if you are of a sensitive nature..

I went to have a bath this morning, and discovered that McCavity had comprehensively made her mark in the tub, using it as a convenient litter tray. It is most unlike McCavity to come upstairs, but today she did, and today she did it. In the bath.

It has to be said that it is much easier to clean up after this sort of accident when it happens in the bath - kitchen paper and dettol spray will make short work. But it also was abundantly clear that the 'blood-in-the-poo' problem was back. Indeedy. 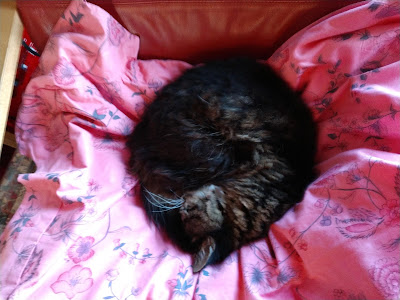 So we called the vet and made an appointment for 4pm. I took a picture of her this afternoon, blissfully asleep, just in case, you know....

Anyway, the very took her away, and came back later saying she seems fine, has lost weight since they last saw her, and there were no ominous lumps or bumps that she could feel, and we could either go for the full battery of blood tests and scan to see if she had liver disease and kidney disease, and put her on a drip and so on and so on, or, take her home, feed her this 'probiotic paste' and see how she got on.

If she has got liver or kidney disease, which is generally what old cats get in the end, there isn't much to be done for them, so the scans and procedures just seemed like an awful lot of messing about for an old lady to cope with, only to tell us that she was - ill. So we bought the paste, and brought the cat home with us.

She seems fine - she's had some paste (eugh) and some supper, and I could take another picture to prove she's ok, but it would look exactly like the first one, without sunshine as it is now dark outside.

So, we can put all the emotions back into the box, keep calm and carry on.