Missed a post yesterday... both of us are feeling a bit 'slow' after the past few days. We keep yawning, massive, face-stretching yawns - he does one, and then me, and then him, and then me...

There was a time when my jaw was prone to get stuck wide open - it happened in Great Yarmouth when I was about eleven, and I had to walk around the town for the rest of the afternoon feeling like a complete idiot until it clicked and I was able to close it. And in a 6th form maths lesson. Vectors, as I remember. How I hated applied maths.

Teas; yesterday was 'calm', which in the circumstances was entirely appropriate. I have no idea if it worked. 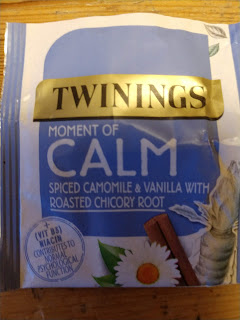 I found the tea in my advent calendar after a particularly tricky phone call; someone called me in considerable distress after being cut-off phoning my father - the telephones at the hospital tend to do that. I remember that one person used to phone every evening for news when my mother was nearing the end of her life, and after I had put the phone down I would go to the kitchen and eat pickled gherkins, as a way of dealing with the pent-up impatience I felt. (We solved that one by me never answering the phone in the evenings... he would get a brief message from Best Beloved instead)
Anyway, there is continuing good news re my father as far as returning to his flat is concerned, and being back in is own home will make all the difference. He is saying 'Monday' in tones of great decisiveness, we are saying 'well, looks like it will be sometime next week...' in more neutral tones.
Today's tea; Jasmine Tea 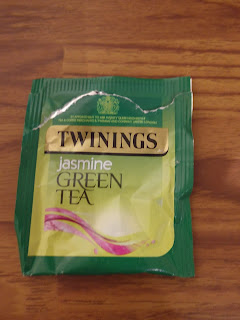 I made a pot, and then decided to have coffee instead, to go with my Advent chocolate.
I've been indulging in procrastination big time - having taught three piano lesson this morning I couldn't bring myself to write up and send the notes, so made Air Fryer chocolate chip cookies (YES!!!). I cooked three and have frozen the the other twelve for laters. Glad I did, because if I had cooked them I would have eaten them.
I also made another faux Christmas Cake - I think I am nearly there with the recipe. I just need to adjust temperature and timing. BB said he thought it might be slightly dry - I think I may just solve that problem by pouring some of his whisky inot it.
The poems for yesterday and today were Suddenly - same title as the last one, but written later. This photograph (snitched from twtr) misses out all the line spacings. 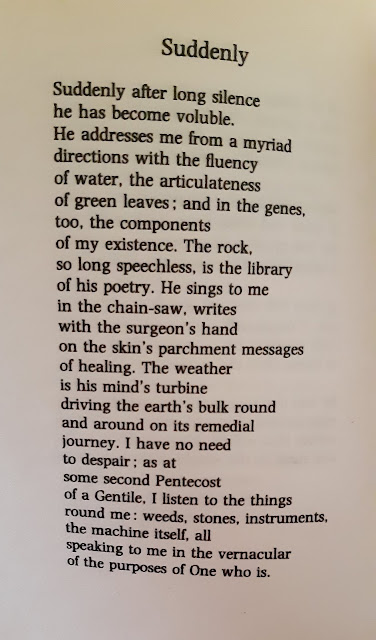 Very different to the other poem with the same title.
Today's poem is Sea-Watching; someone has put it on their blog here  If you happen to go and have a look you will see what I mean about line spacings. Sea-watching took me straight back to staying in Falmouth, sitting upstairs looking out over the Fal estuary towards St Mawes and beyond, not thinking of anything, just looking at the sea and the sky...
Aplogoes for typos. It's bedtime.