G for Gold - gold moments in every day, even if they only last as long as it takes to drink a cup of tea (or glass of wine) or see the sun catching the leaves on the tress - I took this picture on my birthday while waiting for news of my father who was in hospital... 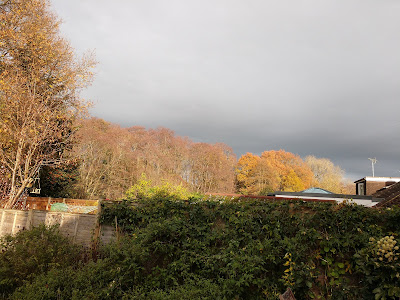 The tree will be bare branches now of course.
This morning I realised that yesterday should have been
F - frankincense, fragrance, and friends suggested frangipane, frangipani flowers, and, of course, friends.
I went out into the garden for a few minutes - just long enough to feel my face begin to freeze, to see why the salvias had suddenly all got white fluffy flowers 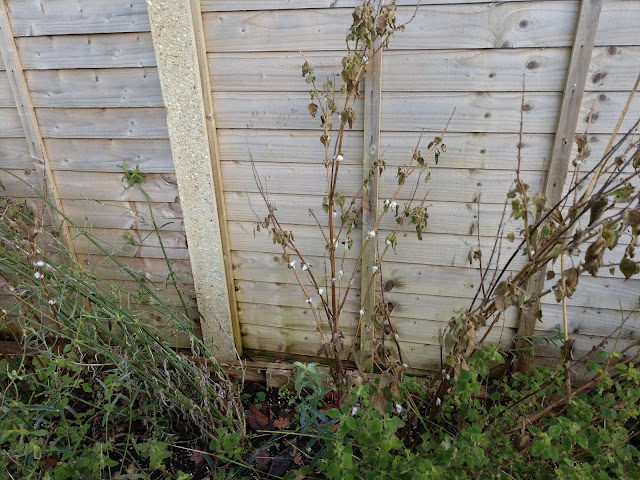 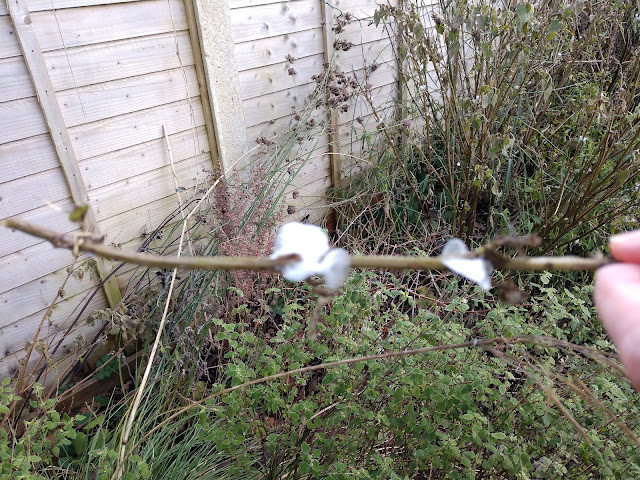 I don't know if you can make it out, but they were made of thin strands of ice, like little tufts of that fiendish 'angel hair' you can buy to decorate your Christmas tree. 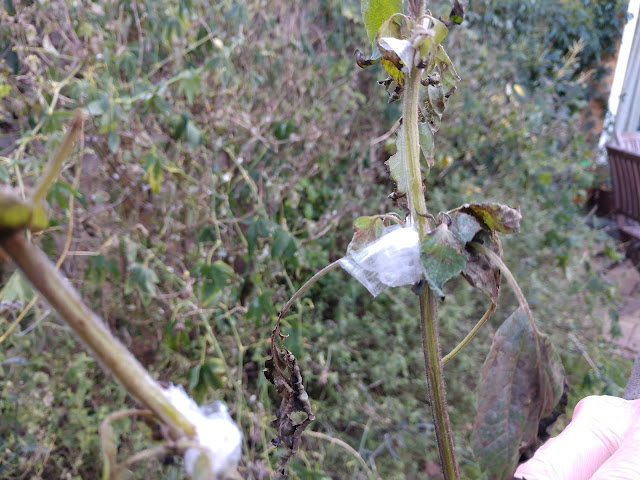 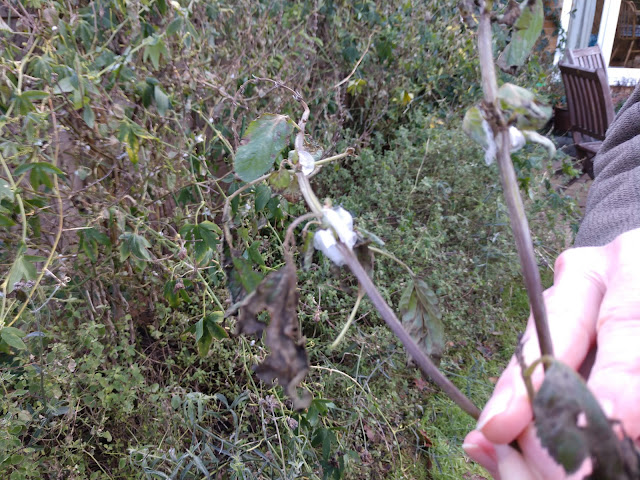 I had seen some photographs of ice hair that someone discovered on Dartmoor a day or so ago.
This article states that it is a consequence of temperature and moisture and the presence of a fungus - I don't think fungus was involved in my ice flowers, but they looked very similar.
I've certainly never seen anything like it before - I'll have to look again tomorrow.
Christmas clearing up is in progress and will probably last for a few more weeks. The tree has been wrestled into a swaddling of bubble wrap and gaffer tape - it managed to destroy its box. It is a truism that artificial trees are reluctant to return to the compacted size they were when first put into the box in the factory. Baubles and tinsel are in their respective carrier bags and are being carted up to the back bedroom every time one or other of us treks upstairs. Only a couple more trips to go.
Last year none of the Christmas stuff made it into the loft - I suspect the same will happen again. It certainly made things easier this year.
We are sitting up waiting for the delivery of a new printer. The old one printed its last page a week ago. I'm impressed that it lasted as long as seven years, the rate I use it. This morning that tracking service said it had reached the Netherlands, and would arrive by 9.30 tonight. So that's thirteen minutes to go.... but when do we decide that 'running late' has become 'not arriving today'?
Waiting up, did I say? We've been going to bed pretty early, taking hot chocolate and books.
Now, about hot chocolate... take an espresso mug, drop in a square of 90% and a square of 70% Swiss or Belgian chocolate, (I suspect 2 squares of 80% would come to the same thing, but I'm using what we've got) and a small teaspoon of sugar and top up with milk. Heat in the microwave, watching like a hawk, because after a minute it will boil over! I let it rise up once or twice (quick reactions on the stop button) and then give it a good stir.
It makes a smooth, dark, rich, concentrated drink, and the small sized mug is plenty! I make it for himself, but not for me, much as I would like it, as my stomach no longer enjoys a milky drink at night. Sad, but I console myself by thinking of all the calories I am NOT consuming!
Posted by KirstenM at 21:28:00