Let's see, what has been happening since Tuesday?

Wednesday was surprise vaccination day for Himself - the local centre had an unexpected delivery of Pfizer vaccine so they were phoning round all the people on their list.

No real side-effects apart from a sore arm for several days - sore enough that I was slightly apprehensive when I went for my vaccination on Saturday lunchtime. 'Good, it's not bleeding', said the nurse, who was actually a pharamcist. 'I don't like it when they bleed, makes me feel a bit ill'. What a job if you don't like the sight of blood - shades of the 'Doc Martin' series. I had the Astra-Zeneca one, and have had no side-effects (so far) at all.

We went round to my father's again on - must have been Friday, and this time we took the books, and this time he let down the string and hauled them up, to the interest of the lady in the ground floor flat. She knows my father quite well, so probably wasn't too surprised - she had been amused when he threw the last lot of books down to us when he had finished with them, a week or so ago.

We were promised snow this weekend, and it has been sleety drizzle all day. Most disappointing. Every so often the sleet becomes slightly snow-like, but everything melts on contact with the sodden ground. The only tiny scrap of snow that hadn't melted had been blown into a cobweb in a sheltered corner ofthe garden bench.

Oh! Now that it is getting dark, the sleet is snowier, and beginning to lie! I went to take a picture of the cobweb full of snow 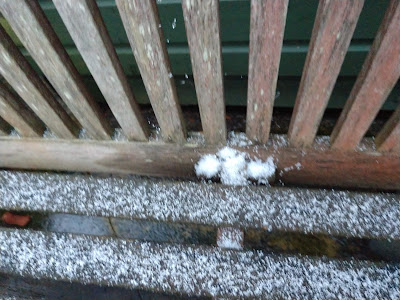 and discovered that ore snow had settled on top, and is beginning to cover the slats on the bench.

And the table, and the triffid 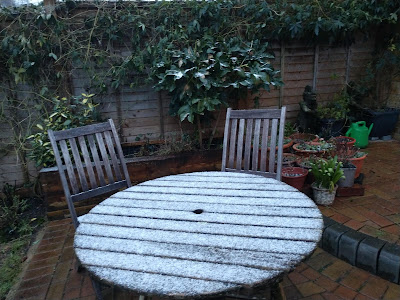 Now I want it to be tomorrow morning, and wake up to a world of wonder....
Patience....

The yoghurt pot seedy cake has been and gone - it was very good. The replacement, a yoghurt pot 'finishing a half jar of mincemeat cake' is down to a final lump. I used the same recipe as the last post, but reduced the sugar and replaced with dark brown sugar, and used slightly less oil, as the mincemeat has sugar and suet in it. I added a handful of dried fruit, and used mostly brown SR flour as the white four bag was nearly empty. It is good, but not AS good. But at least the eggs and yoghurt didn't go to waste.

The cooking 'topic' for this month is 'separating puddings' - I know a lemon one from the book that came with a Belling cooker decades ago, and a chocolate one that came from a fund-raiser church cookbook, and Eliza Acton's rich rice pudding which Delia Smith has included in one of her cookery books. I've jotted down another one from the internet, but it involved dessicated coconut which is not something I particularly like. I am mulling over a substitution - or maybe one can leave it out?

Meanwhile I have been munching Anzac biscuits, which do seem to contain coconut, and enjoying them. I should reconsider my dislike for coconut. They were a present from a friend, in exchange for lending some of our Wentworth whimsy jigsaws. 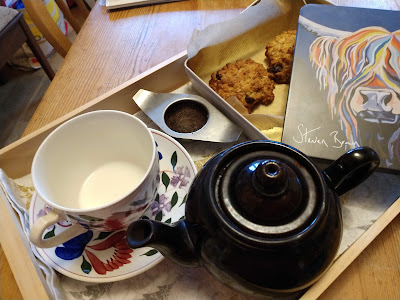 This tray of tea and biscuits is probably the only reason have I managed to get through writing up the lesson notes this afternoon to send out by email.

Learning to touch type as my January skill has been a very good idea - it has speeded up my typing and my accuracy. I should put that sentence into more of a past tense; I realize now, after having neglected both the book and the on-line tutorial that the skills are only shallow and need a lot of reinforcement - and soon.

February skill... hmm. I have an artbox of ink-drawing materials to investigate. I can see how getting a handle on how this could link in nicely with lino-printing...

February craft - I have a summer top which I wish to convert to a dress by adding a skirt in the same material. The mindless knitted shawl is still a work-in-progress, as is the mindless crochet shawl, but the mitred square blanket is complete, including i-cord edging and all the ends sewn in. 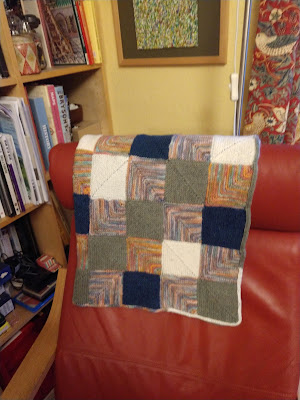 All the ends bar one. Have just dealt with that now.

And February Spring Clean - I have just about finished the bathroom and loo - already! - only the bathroom floor and turning out the cupboard under the basin left. I may even get ahead of myself and deal with the hall-stairs-and-landing this month.