I have survived the PCR test, and the trip to London for routine clinic appointments and tests. A friend drove us in her campervan, so that social distancing and avoiding public transport could all happen without any stress - so appreciated. At the hospital 'proper' mask wearing was almost universal - obviously more relaxed near the coffee shops (how else can you drink your coffee and chomp on a sandwich?) and it felt - safe.

Attempting a 6 minute walk test (where you walk as many times as you can up and down a measured length of corridor in 6 minutes) should never be done while wearing a FFP3 mask. Trust me. This could be why the result of that test was lower than expected, and generally oxygen readings were lower. I did peel off that mask and replace it with an ordinary one, the same as everyone else, after that experience.

The results were all slightly lower than last time, which was back in 2019, and could be down to any, or all of, wearing the FFP3 mask which is significantly harder to breathe through than the ordinary one,  ,  change in heart or lung function, or just generally becoming unfit from having stopped work and being sat sitting around in a state of sloth for 18 months. The cardiologist relaxed somewhat when I showed him the walk tests and so forth that I had been doing at home, and prescribed '5000 steps a day, but work up to it, not all at once'. Ah. That is quite a lot of walking for me...

Talking of masks, I have made this; 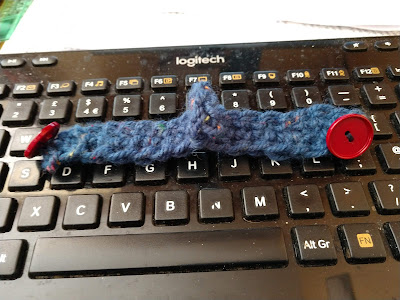 a short crochet strap with a button at each end. You fix the over-ear loops of the mask over the buttons instead of round your ear, which massively simplifies things when one already has hearing aids and spectacles hooked over your ears. The tab in the middle is because this is the prototype and was a little too long. I shall make another in due course. (I'm not the one with hearing aids!)

The walking and paying attention to regaining fitness is continuing, with a blip when I had to isolate for a few days between PCR test and going up to London, and another blip yesterday when I decided to have a day off. Although I have discovered a pulmonary rehab exercise video made by NHS Scotland, which is very good.

I have finished the slipover I have been working on for ages. The yarn is much thinner than anything I have every used before, and progress seemed very slow. I'm pleased with the result, and, as you can see, I am persevering with the 100day dress challenge. The dress if brilliant, so far, in hot weather and in cool. 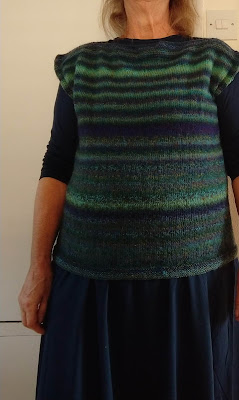 I know it is the second half of Summer when these yellow flowers appear. They are humming, buzzing with bees. 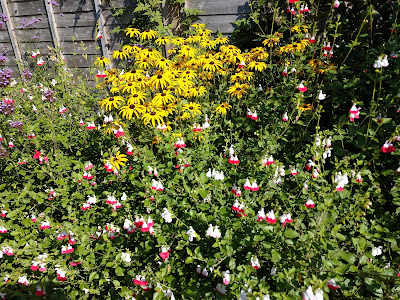 I was given some cucamelon seeds for Christmas, and the other day I discovered that the vine is covered in them. I tasted one, and was not impressed; rather sour, I thought. Perhaps it wasn't ripe. 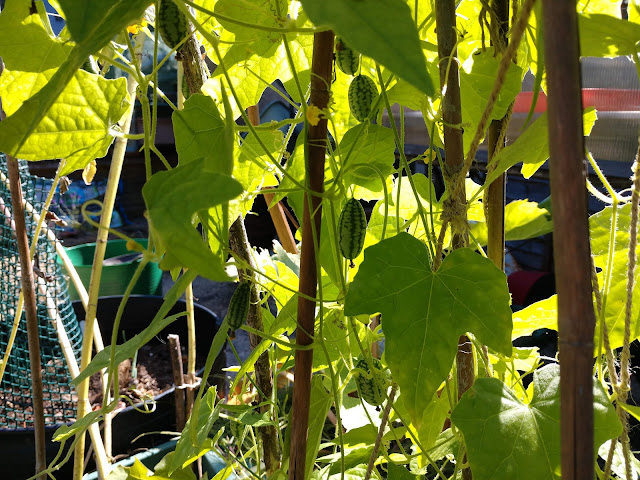 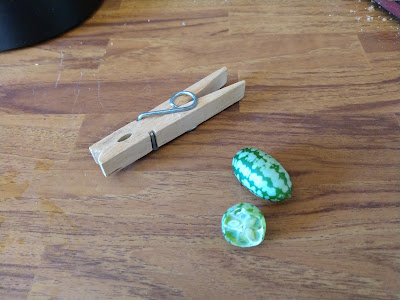 Nope. This is the size they should be, and it turns out they are meant to taste sour, so I have been looking information on what you are supposed to do with them. Apparently they are a 'superfood' and 'packed with anti-oxidants'. So I will have another go at eating them. Somehow.