Monday 8th November - Round the weeks we go again

I managed to go for a very short walk - up the road and back again - before lunch. Not much to say. Peering into the gardens, looking at the last of the summer flowers, and a few autumn flowers. It was fresh air. That's all I can find to say about it.

That sounds a bit grey - and that's what the day is. I call them 'eating days', when no biscuits, cakes, crisps or anything are safe from consumption. The only thing to do is NOT TO TAKE THE FIRST BITE but it is tool late for that advice now.

The  chilli sour dough croutons were delicious - the end of a load, cubed, tossed in chilli oil and zapped in the air-fryer for maybe 5 minutes at about 170. The load was pretty old and dry so they didn't take long to go crisp and golden.

However, it was a few days ago that I made them. (Oh, chilli oil? That is simplicity itself. Shove a couple of whole dried chillis into a small bottle of olive oil and let it fester, sorry, infuse for some weeks. How many? I dunno - it gets stronger as the weeks go by and the oil is used. Just tip more oil in as necessary).

Last night - Ooo-er - the air-fryer suddenly switched itself on, no, off, no, onoffonoffonoffon. With loud and anxious beeps. We fixed the firstpart ofthe problem by pulling out the plug from the wall. A bit of research informs us that they last around 4-5 years, depending on useage, and that this was a fault in the earlier digitally controlled versions of this brand. Phillips, if you need to know.

We bought ours in 2017 and use it most days... so, we now had a different problem. Himself has spent the morning researching, and come to the conclusion that the problem in the early models appears to have gone away, and a new near-identical one will be arriving on Thursday because we are very much in favour of Air-Fryers. Might might not leave it permanently switched on...

I've been knitting; the green snakey scarf continues to grow. Every so often I do a stitch count and find there are no longer 40 stitches on the needles. It doesn't matter - I just create one in an inconspicuous place and carry on. The edges are a bit uneven in places but who is going to see? 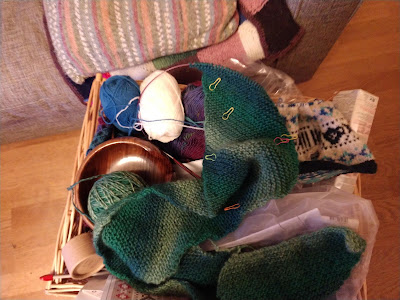 (The pattern - cast on however many stitches - do some counting and measuring to find out what you would like. I'm using double knitting yarn on 5mm needles, I think. I read somewhere you go up a needles size if you are knitting something in garter stitch if you want a looser fabric. Then, for odd numbered rows, Knit 2 together, knit to last stitch, knit through back and front of stitch to make one so you keep the same number of stitches. For even umber rows, knit all the stitches. It is useful to put a marker on the side where you do the twiddly stuff. It must be that I keep forgetting the 'make an extra stitch' at the end of the odd rows when the action on television gets too intense. If you need to 'fix' by adding an extra stitch, just add a loop with a twist to stop it being an ordinary yarn over part way along a row.)

The blue tea cosy has been a bit backwards and forwards, but having unpicked a whole round, stitch by stitch, I have it bristling with stitch markers signalling the pattern repeats and it is back on track. 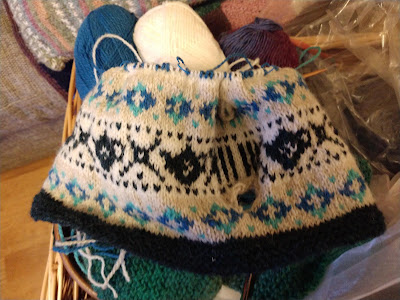 Those vertical lines between the tea pots mark where I shall CUT through the knitting to make the place where the handle, or the spout, goes through - there is another set of lines on the other side!
Talking of tea...