I'm on a roll, at least for posting on this blog. I can't say the same about going for a daily walk (too cold) or practising the piano (not in the mood) or doing some drawing or painting (also not in the mood).

While it is so cold and grey I like to sit close to the radiator and read, or knit, or do Freecell and Suduko and the new craze, Wordle.

I'm also pretty occupied by thinking about the garden.

I have potatoes chitting on a windowsill upstairs 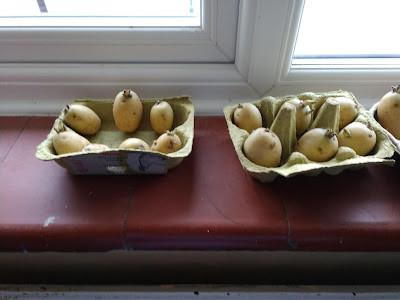 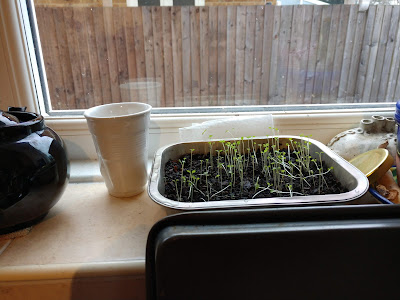 and peas just beginning to sprout on a downstairs windowsill. These last are not for planting out, but for adding as shoots to salads once they are big enough. 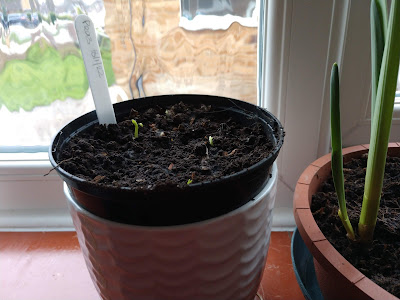 I've moved the tete-a-tete daffodils to the sitting room now that they are flowering. They are a such a pleasure, so cheerful, and also so poignant, because they remind me so much of my mother. 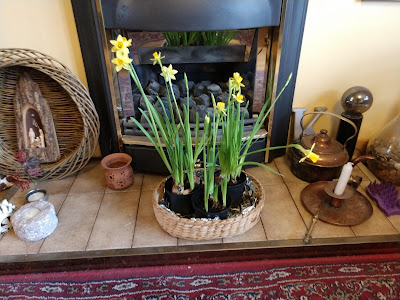 Yesterday was the sixth anniversary of her death, back in 2016. We had kept her room in the nursing home full of flowers, mostly pots of daffodils, all through the few weeks she was there after leaving hospital; balancing them as high as we could on the windowsill so that she could see them easily. As each pot of daffodils began to fade we would replace them, and I planted them in a row along the hedge at the bottom of the garden.

She always had flowers in the house, and taught me how to arrange them, how to 'make a spider web from the stems, so that they criss cross and hold each other up'. The big glass bowl of tulips, the silver coffee jug of roses, the small vases of  grape hyacinths, vast displays of dahlias... 'put the leaves in first, and then add the flowers'. Bunches of cut daffodils always had to have some leaves with them, cut from the garden if necessary.

It's a strange thing - we were all so focussed on supporting my father through this time, that I think we might have lost sight the rest of us to some degree, of her being my and my brother's mother, and such an important friend for my husband, and being a grandmother, and all the other members of the family and friends affected by her death. Ah well; that's how it was then, and here's how it is now. We did the best we could at the time. It's hard to think and clearly in the midst of everything.  Hindsight and all that.

Anyway, now I have daffodils too, because it's what you need in January and February, to fend off the grey days and now, to celebrate my mother's life.

I took the picture of the flowers just before we sat down to our little smackeral of something; cake and 'second coffee'. We try and restrain ourselves to just three coffees per day - morning, elevenses, and after lunch. Otherwise we would struggle to keep pace with ordering supplies!

I have a fairly inefficient and relaxed approach to watching my weight, which is probably why I still avoir  more poids that I would ideally like. My current aim is to begin each week  little lighter than I began the previous week. Here is a conundrum -  to be at my lightest I should weigh myself first thing in the morning, before breakfast but after going to the loo. Yes, fine, but that sets a harder target to meet the following week. But if I weigh myself after breakfast I'm likely to be disappointed that I don't weight very much less than before, or worse still, I'm heavier.

My 'diet method', as I have said before, is to try and eat half as much as my husband. 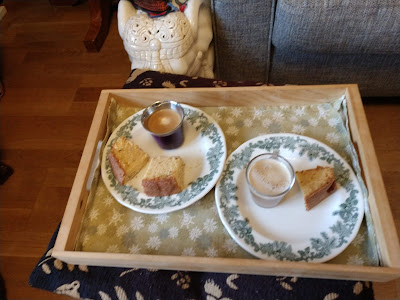 His plate is on the left, mine on the right. So far, so good. But then I'm more inclined to snack on this and that through the day - a handful of nuts, a chocolate button from the last of the Christmas store, a few crisps or crackers... He doesn't seem suffer from the same weakness, or maybe he is just very skilled at surreptitious snacking? I shall keep an eye on this.

I suppose I shouldn't make cakes if I were that concerned about my weight, or at least not the sort of cakes that I like to eat. That would be a start.

It does make me very pleased, as well as slightly sad, that the milk chocolate in the Christmas stash is nearly all gone, and only a few milk chocolate buttons. Everything else is the rich, dark, intense kind of chocolate that the French apparently eat in small quantities for medicinal purposes, as a source of iron.  He will enjoy them; they don't have the same appeal for me. And as for the marzipan -  that's all his to enjoy with no competition from me. 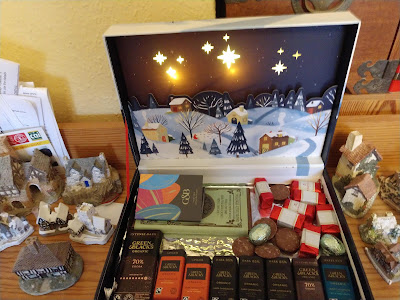