Friday 25th March - the day after the day before

Yesterday was a series of social events;

Coffee with friends  - the Lent group I am in - sitting in the sun among the daffodils and violets under the old apple tree at the bottom of the garden which is just coming into leaf. The sun was warm, there was hardly any breeze, and it was a lovely slow morning.

We had just spent a hectic half hour arranging chairs and tables so the less mobile friend could sit in a chair with arms, with the only reliable table beside her, and trimming low branches, and clearing trip hazards along the path. Sitting and relaxing was doubly good for me!

Lunch, outside again, just soup, ryvita and some bits of salad to munch. One of the coffee morning friends stayed. We moved up to sit nearer the house as the patio was now in the sun, and just enough of a breeze had arrived to stop us from melting. We had marmite with the ryvita - that brought back memories! Back when I was at university, there was a sudden craze for marmite and cottage cheese on ryvita... note to self, add cottage cheese to the shopping list!

Then two lessons to teach - they do count as social events, as listening and conversation takes place, at quite an intense level for me, and usually for the student as well.

Do you want to hear what they are learning? In the first one we were working on 'Bransle de la Torche' composed in about 1600 by Michael Praetorius and also one of my favourite pieces, 'The Snow Melts', composed by Brian Chapple fairly recently.  (He's got a Steinway! have I given up envy for Lent?)

I think I may have mentioned the piece that the second student is learning, another of my favourites, Rumores de la Caleta by Albeniz.

Finally, I had an evening zoom meeting - the Lent group has been meeting in the evenings on zoom until the weather has made it possible to meet outside.

The point being, that today I have been moving at half speed. I have managed to write up yesterday's lessons, and put some red lettuce seeds into pots into my new plastic greenhouse 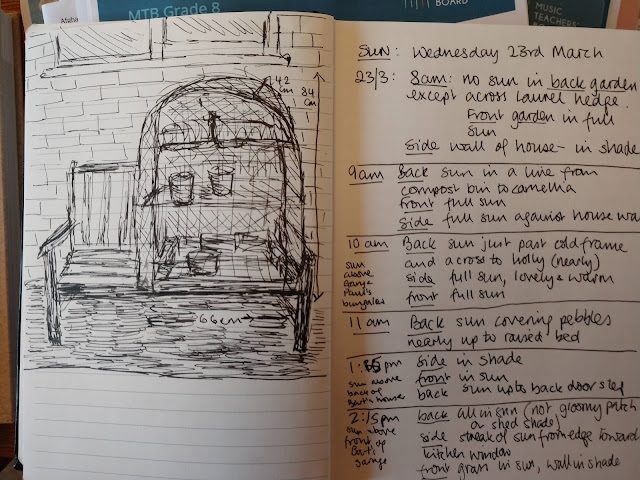 Here's the sketch I made on Wednesday, after we had moved the dodgiest of the benches to the side of the house and put the old greenhouse on it. I wrote down the measurements because I wanted to get a new cover; the plastic mesh has perished so that it is just a criss-cross of  webbing and no little plastic squares in between. I wasn't able to buy a cover to fit this shape, so bought a new one. The old one is second hand, bought fifteen years ago by a friend's daughter! It will still give some protection to the plants inside.

The notes on the side are from tracking the movement of the sun to see where to place things.

Noah's Ark - who knew that there were ostriches in the book of Job? 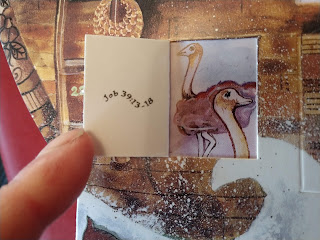 Last year, or the year before, I forget now, I was enthused by the idea of Spring Cleaning and bought an ostrich feather duster. It is very efficient at sweeping dust and swiping down the cobwebs but only if I take it out of the cupboard. 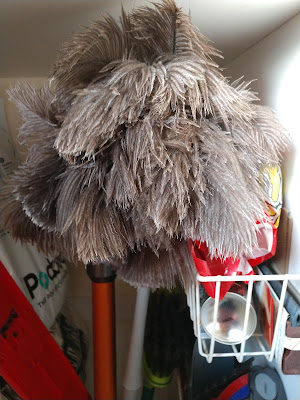