I started by washing up after lunch, and one thing lead to another so I washed up the thingy that the washing up liquid and spongy whatsit live in, and behind the sink, and saw the state of the kitchen windowsill... this required something stronger than a wipe with a damp cloth so I ferreted among the various bottles under the sink for the 'power' cleaner.

We keep the various types of cleaners in separate plastic crates, at least, they are sorted when we sort the cupboard. Over subsequent weeks they all seem to shuffle around somehow so it took me a moment to find the bottle I wanted. Horrors! It was dripping wet, and further inspection revealed that the crate was half full of water!

I called the Man of the House to come and lift out the heavy crate and do the grovelling under the sink bit. The whole cupboard, apart from the crate of bottles, was bone dry. What must have happened is that when we had a leak at the end of last year, the water must have all been caught by the crate and we didn't notice. Usually the water from washing machine and dishwasher leaks goes straight through the gaps in the floorboards and into the six-foot deep void beneath our house (which is why it can take us a while to realise what is going on).

Everywhere was bone dry so all is well. Meanwhile we took the opportunity to rearrange the contents of the other crates, including disposing of several ancient and rusting cans.

I can strongly recommend using crates to store things under the sink, even if you don't discover the leaks for month after the event!

I have been doing knitting related activities of one kind or another most of the morning and afternoon. I have decided that this cardigan I made a couple of years ago really is a complete failure, and so am 'frogging' it to recover the yarn for something else. 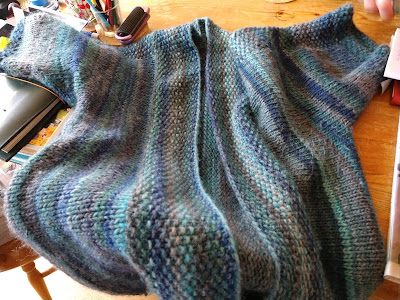 'Frogging'?  Ripping it out, so called because of what a frog says; 'rip it! rip it!. Undoing the cast off edge was a tedious process, but watching the tail end of Shrek helped pass the time.
Noah's Ark
Friday was the raven, released by Noah after the rain had stopped. 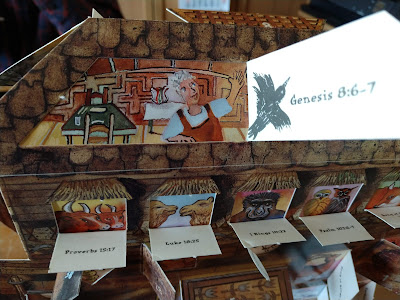 Saturday was the dove, released by Noah after the raven didn't come back. The dove returned bearing an olive branch. 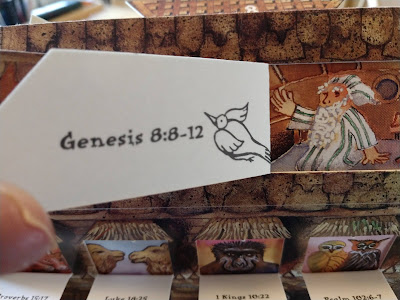 I was expecting Easter Day to be a rainbow, but it is a family celebration - Noah and all the family. 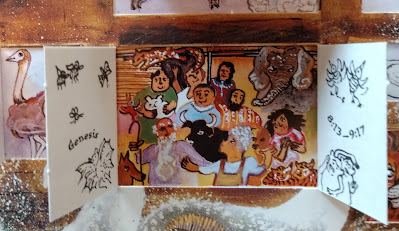 I hope you all had a Happy Day on Easter Sunday - we have been so lucky with the weather. Our friends in Canada have just sent me a photograph of their back garden with fresh snow!