We've started seriously saving water, as a hosepipe ban is threatened. There's a tub just outside the kitchen door where we can collect 'grey' water from the washing up, or from rinsing vegetables, or washing our hands 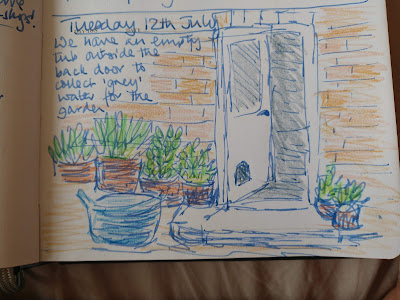 Yesterday we collected enough through the day to give some to the tomatoes and the rest to various other plants that are looking sad and shrivelled.

Today I decided to have a bath. Unfortunately I let it become too hot, so had to add extra cold water. This meant I had a substantially deeper and more luxurious bath than I had intended. So what to do with all this only slightly soapy water?

I considered siphoning it through the window, but we don't have a suitable hose. Maybe carry it down in buckets, like pre-plumbing days of yore? Heavy work, and probably a disaster for our wooden stair case which really does not like having water spilled on it.

If we got some kind of pump, a stirrup pump, maybe, that could be a solution.

The idea that really appealed was to try throw the water out of the window by the bucket-full into the biggest of the plastic gardening tubs that I bought years ago as part of my home-made samba kit. 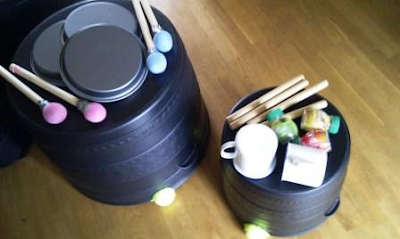 The first thing to do would be to find out where the water would land once it reached the ground. I filled a 2-pint plastic milk container that I keep upstairs for watering plants, checked that outside the window was clear, and launched. Then I leant out of the window so see where the splash marks were.

There, below me, was a bemused cat, sitting at the edge of the wet patch on the patio, obviously trying to make sense of what was in front of it. I am pleased to report that she was still dry.

The experiment was enough to convince me that throwing water put of the window was not going to be a solution. The window end of the bath slopes markedly, which is why it is such a comfortable shape, but makes the whole effort of reaching the window a bit strenuous. I would have to persuade Himself of the brilliance of this plan, and I could see that this was not going to be possible.

A few minutes later, Himself did appear upstairs. He had been tidying in the kitchen when I conducted the experiment and gone to see what was happening. The strange wet patch was a bit of a worry - the joints in the ancient cast iron downpipe seemed secure and dry, and the area round the nearby manhole cover was also dry. Then he saw the open bathroom window, and recollected that I had just had a bath.

We've been married for nearly 45 years. So it all made complete sense to him.

But there's another point to consider. Our drains (as old as the downpipe) rely on frequent rushes of water to keep things moving along. We are the third of four houses sharing the same run of drains, and the number of times we've had the manhole cover up, and pressure-hosed hundred and thousands of gallons or litres of water 'up-along' and 'down-along' to clear blockages are too horrible to remember.

The worst was when the end house got a water meter AND instantly put a water saving device in the cistern of their loo. The money they saved on their bill went onto ours as we dealt with the consequences!

So, in this case, we really do have to let the water go down the drain in order to save water.