I made two New Year's Resolutions this year; indeed, making them was an entirely New Resolution for me, as up until now I have never bothered. I don't see the point of setting myself up to fail.

The first resolution was to take a bag of stuff to the charity shop every month. I've taken about four or five so far this year. I carefully didn't specify the size of the bag, or the weight/volume/quantity of the contents. If it comes to it, I can always take an extra bag or two some months to make it up. Actually, I have already resorted to that slight rubato to the tempo of the donations. 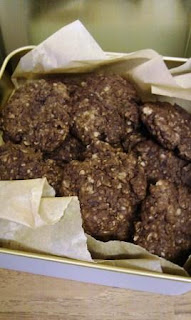 The second resolution was to have chocolate most weeks (which was why I couldn't give up chocolate for Lent).

That resolution has gone very well, but today there is no chocolate left and I haven't had anything chocolatey since yesterday evening.

I decided to make some of these flapjacks, which I think are the very first post in this blog. I wasn't really concentrating, which is why I realised too late that you weren't supposed to put everything in the saucepan in one go, but luckily it is a forgiving recipe. At the last moment, I added a couple of tablespoons of cocoa powder, which turned out to be a very good idea.

I've taken a photograph of the chocolate flapjacks, but I clearly lack the skill of professional food stylists. I can assure you that in real life they don't look at all like dog biscuits.

That reminds me; I remember, years and years ago, scores of years ago, when we (my brother and I) were children, we used to take dog biscuits with us when we went off to play on The Common. I think they were called "shapes". They tasted alright, apart from the black ones, which I think were supposed to contain carbon to improve digestion. The dog didn't care for the black ones either.
Posted by KirstenM at 21:33:00