Today has been very surprising!

1  The bridge over the River Arun was NOT flooded! That was a nice surprise - I felt quite apprehensive as I drove towards it this afternoon. I had taken the precaution of checking the tide tables, as


2  There was a splendid chocolate cake on the front door step complete with birthday candle (rather squished into the cake by the lid, but still light-able. I had made myself a lemon drizzle cake yesterday on the assumption that if I didn't make myself a cake, there might not be one! Thank you, ministering angel!

3  After we had eaten our supper, I was presented with the cake stand (which we won in a raffle at the hospital on Saturday afternoon and caused considerable confusion for my mother, as she thought that the cardboard box it came looked like a pizza delivery box) full of lavishly iced chocolate cupcakes, decorated with the letters to make H A P P Y    B I R T H D A Y. So, far from having NO birthday cake, I ended up with three birthday cakes! ﻿
4  There was a bouquet of roses from my husband, waiting for me when we got back from visiting my mother in hospital. We eat supper when we get back - very late, about 9pm, so I wasn't paying much attention and never even noticed the flowers.
The card on top of the clock was written by my mother; if you have been following this blog, you will know that she had a major stroke on 30th October, so for her to have written a birthday message is something really, really special. 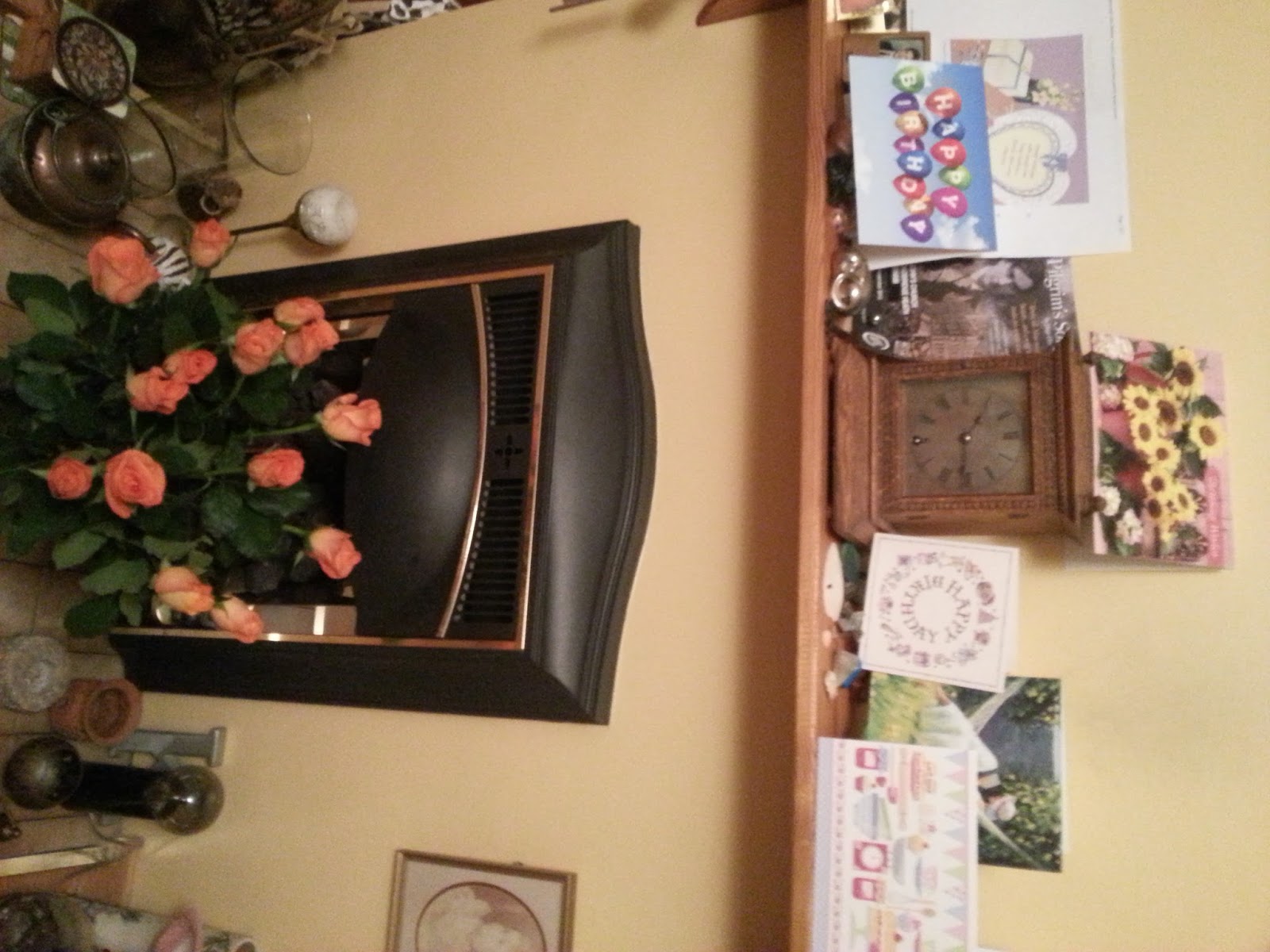 5  And there were presents as well! I LOVE the television play "The Flint Street Nativity" and lost my copy of the DVD several years ago - must have lent it to someone. It is "required watching" every Christmas - just need to make sure I have a box of tissues ready for the bit where the little boy (Stephen Tompkinson) can't bear to say his lines...

I look forward to having the time to get knitting something with the lovely yarns; until then I'll just cuddle them.

The One Word for today will be Surprise! in big curly letters. 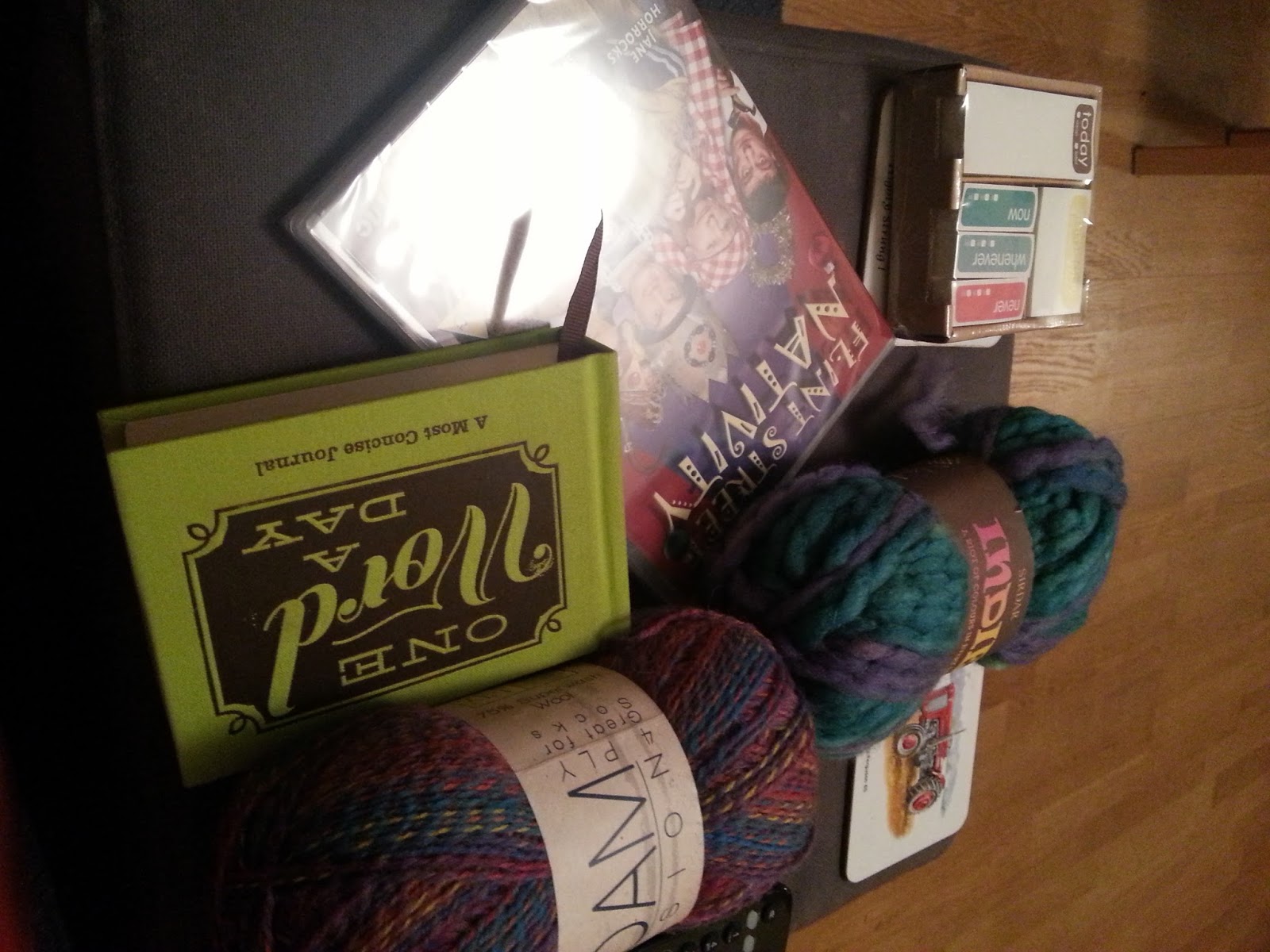 I thought "I'll just log in and get this post written" and guess what! Even Google knows it's my birthday (that's a bit creepy, actually). Here's "my birthday GoogleDoodle":

﻿
I'm very glad today ended on such a cheerful note for me; we visited my mother today, and every day she gets to be more like herself. Which includes the good AND the not-so-good. Today, like yesterday, she was rather "down", but in the way that anyone stuck in hospital, feeling out-of-sorts, faced with depressingly adequate institutional food, unable to fettle for oneself, struggling with  tedium, would feel down. It would be lovely to report that she is in fine form, and great spirits, full of vim and vigour, but that's not the reality of her situation, let alone facing the consequences of a major stroke. Of course there are going to be "down" days. That has to be a part of returning to normal. It would be more scary if she wasn't affected by her situation!
Having said all that, it is still hard to see her stuck in hospital and not be able to wave a magic wand. However, my lovely family has managed to wave a magic wand for me. Abracadaba!