Today I have driven through rain and rain and rain along byways and back roads and lanes.... travelling from the school I teach at On Wednesday afternoons, to the hospital to visit my mother. I don't usually go in the afternoon, midweek, but we were having a meeting with the consultant.

I mithered over how to get to the hospital - google said it's route would take 38 mins, along roads that I had never been along before. The alternative - backtracking until I could join the route I know - would have taken too long. In then end, I followed the google maps route. The roads were empty enough that it was possible for me to snatch quick glances at the printouts of the maps as I went along, and in the end I only missed one turning. Par for the course.

Coming back, it was dark, and I always get hopelessly confused trying to get through the muddled mixture of roundabouts and turnoffs in the main town that I have to somehow traverse. It is complicated by a roundabout with a bus lane right through the middle: an approaching bus with suddenly switch ALL traffic lights abruptly to red (all entrances and exits from the roundabout a traffic-light controlled) while it thunders straight across without any reduction in speed.

I'm always phased by this roundabout, and tonight I exited too early, tried to get back on track and ended up hopelessly entangled in the "Leisure Complex" - a labyrinthine car park serving a mish-mash of cinemas, bowling alleys, fitness centres and restaurants. I extricated myself with great difficulty, and plunged straight into interminable traffic queues on the final stretch of dual carriageway, stretching for miles. 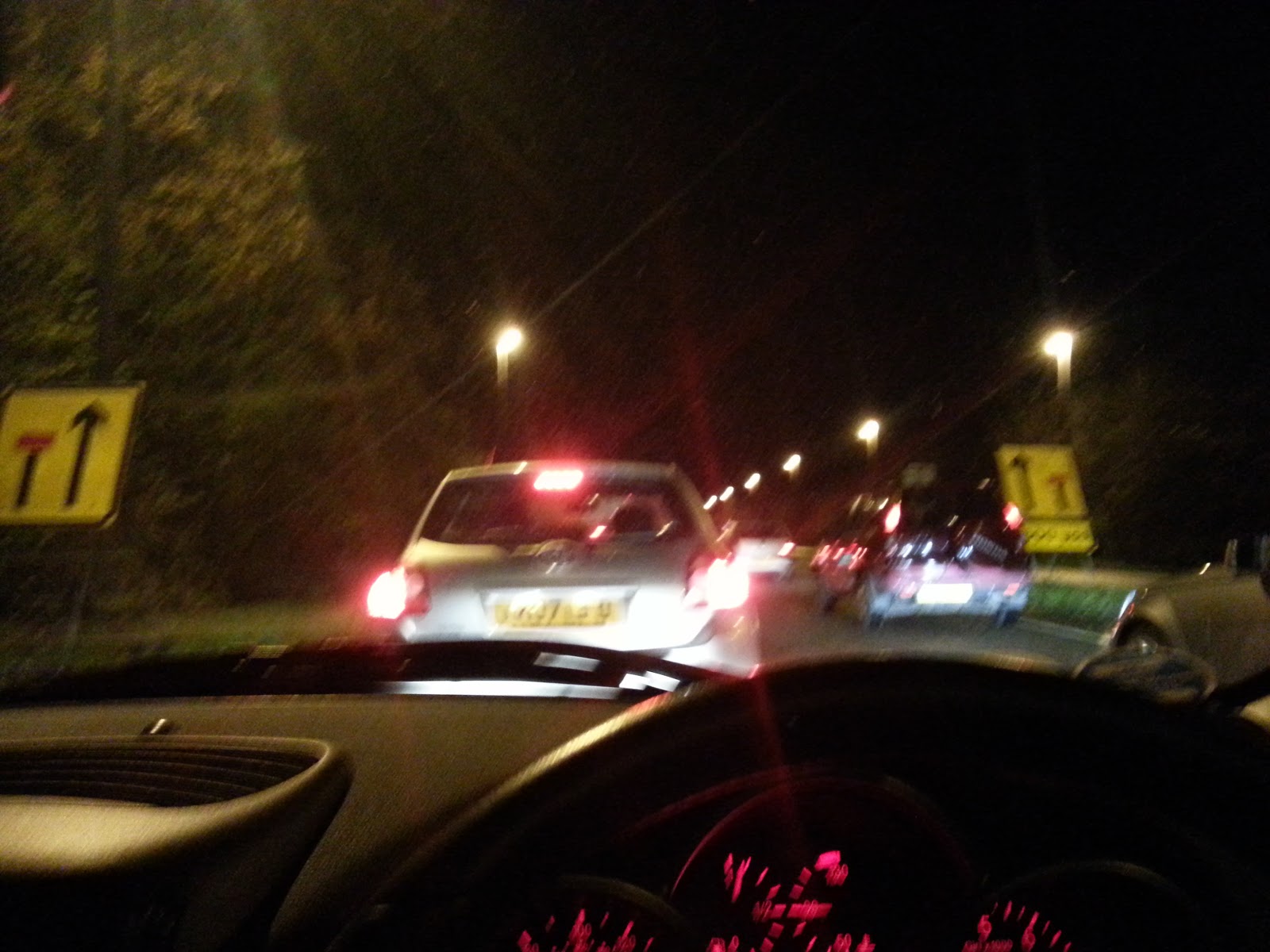 We all crawled along, first merging into one lane, then forced to merge into another lane, and then faced with these two signs...  Luckily, the finale of the Mozart Piano concerto in E flat for two pianos started on Radio 3, and I managed to remain optimistic that the nightmare would end.


So, where now, with my mother? The consultant says she is making good progress, only time will tell, she is medically stable and ready to move to another hospital where they have a special stroke rehab unit - all well and good. It is far too soon to make decisions, frame thoughts, form ideas about what the future may hold. I am worried about whether she will regain movement in her left side - any movement? some movement? or not at all? Her repeated insistence that her left side has always been weak doesn't bode well, unless we manage to galvanise her into making a real effort. If she has always been in the habit of not using her left hand, then it will be so much harder to rebuild the connections. Time. Patience. Hope. Count blessings; speech, swallowing, memories, conversation, ability to read and absorb information. We have been very lucky.
Posted by KirstenM at 21:53:00