Continuing from the previous post........ refilling my cup of cheerfullness

Horsham is full of life and movement today!

It's the annual Morris Dance festival. The Broadwood Morris Men are our local dancers (you can read about them here) http://grahamhirst.net/broadwood/; the Broadwood family (yes, the ones to do with the pianos) lived nearby in Rusper, and were active in the folk revival way back at the beginning of the last century.

Everywhere we went today, we could hear folk tunes, and bells, and the clack of wooden staves. This year there were more black-faced groups than ever before. I saw a group in Oxford last year who dance in almost complete silence - just a the beat of a drum. Eerie. Spooky. Scary.

This group (I've no idea who they are) used a whole band of drummers playing a driving rhythm, but no other instruments at all. They were all dressed completely in black, but joined by the drummers from another group who were much less forbidding in their appearance. 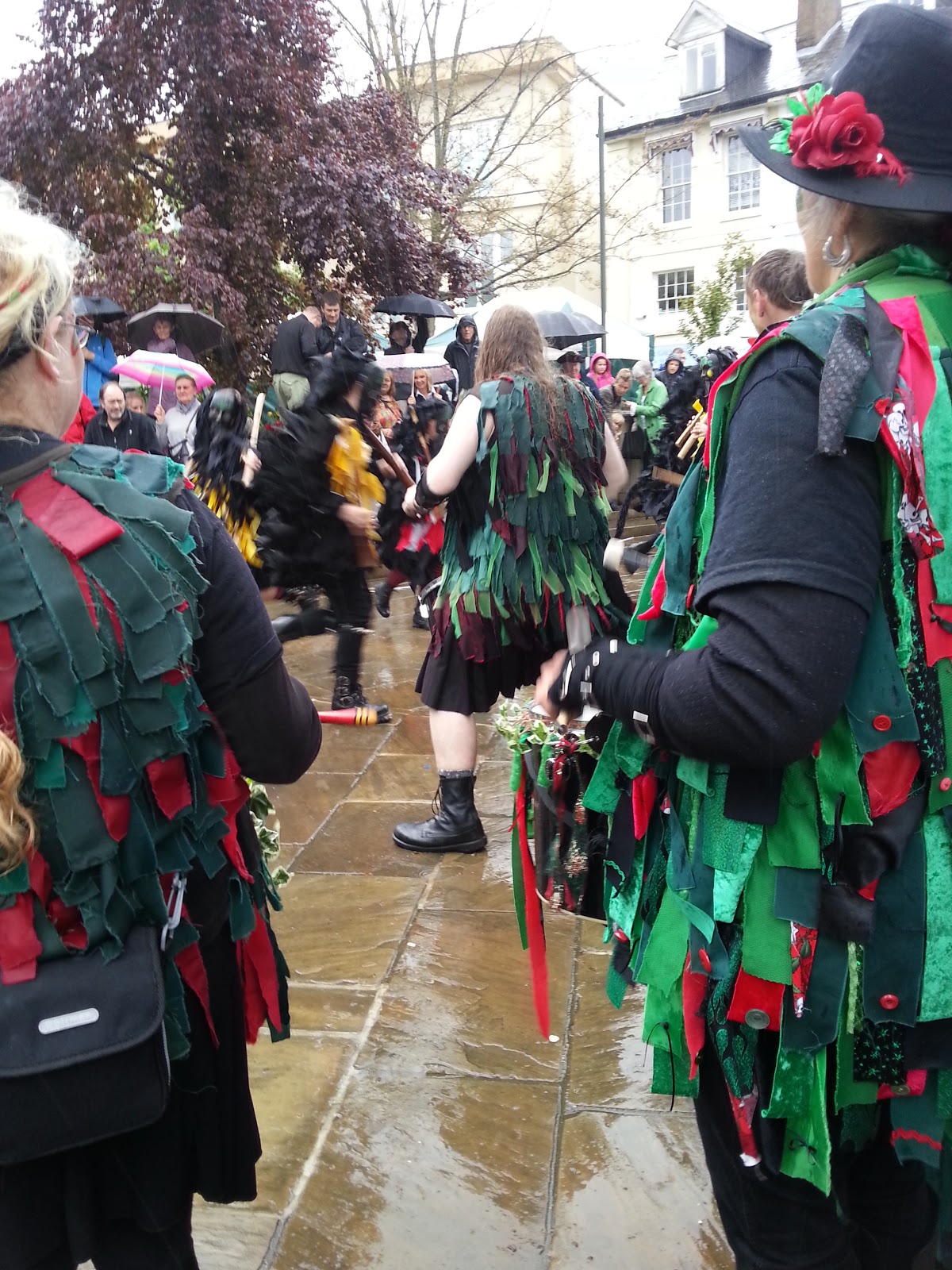 Yes, it was raining. But not too hard.
For lunch we went to Wagamamas and sat by the window eating noodles and lollipop prawns and drinking flowering jasmine tea. 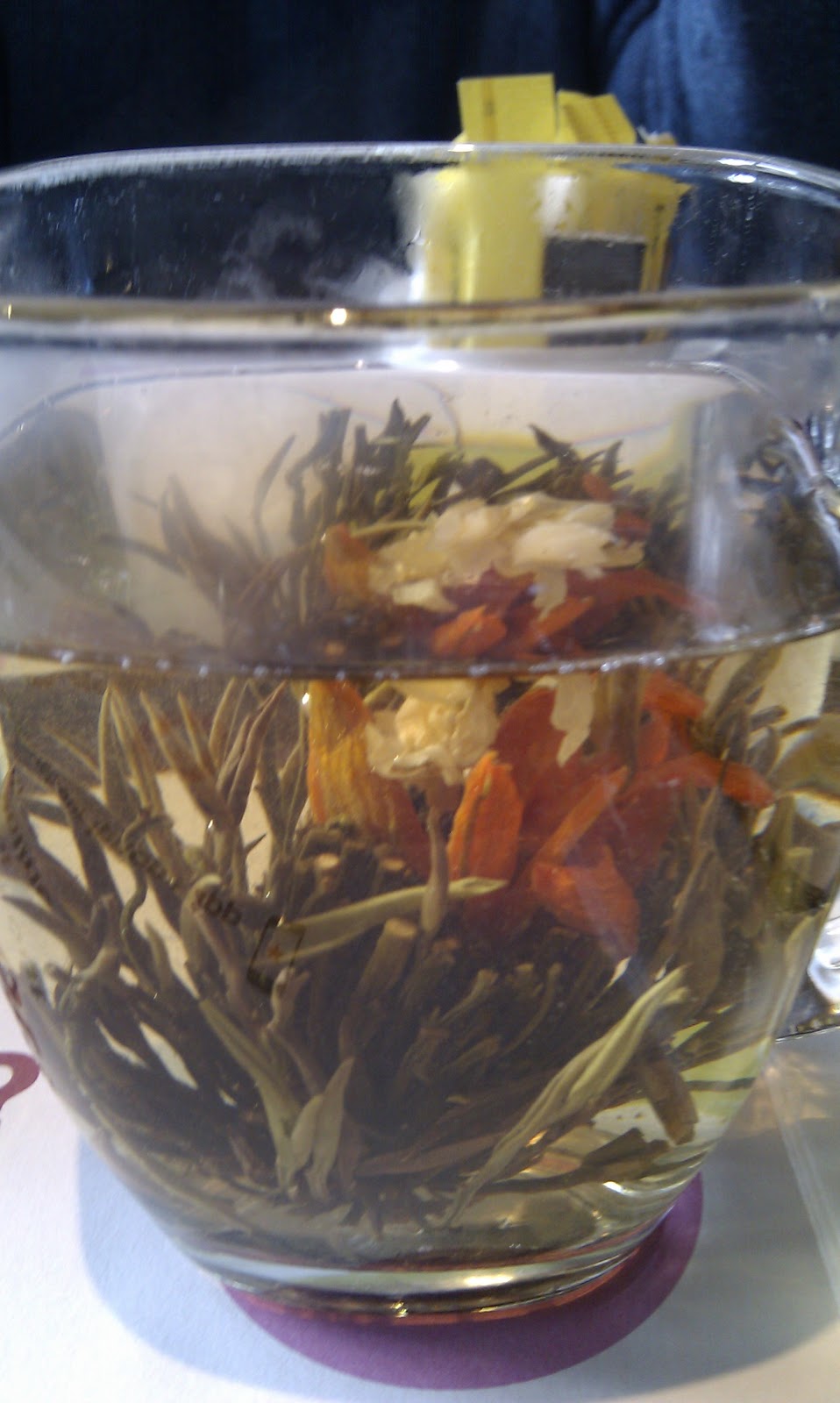 We watched some Morris men doing a complicated dance involving whacking two staves together, or whacking each other's staves, in wild and varied patterns. It began to rain - drops at first, but soon it was coming down in stair rods. The band played faster and faster, and the dancers danced faster and faster, and the whacking changed from being artistic to tricky to down-right terrifying. Round and round, whackety-whack, hop and skip and jump and whackety-whackety - with a great cheer they finished the dance and ran for cover.
I watched a blind man  travel the length of the pedestrianised road, edging around planters and outside signs with astonishing accuracy. Then he came to a cluster of little tables bordered by a sort of barrier, outside the bistro opposite us. Horrors! He got himself the wrong side of the barrier, and was tracking down towards a dead end, trapped between the tables and the barrier! I held my breath; after a few more steps he stopped, paused, turned round and extricated himself, and continued on his way undaunted. Respect, I say, and again, respect.
I saw a man and a small child heading home. He was carrying a blue bear rather larger than the toddler, and sheltering the enormous toy from the rain with an umbrella. 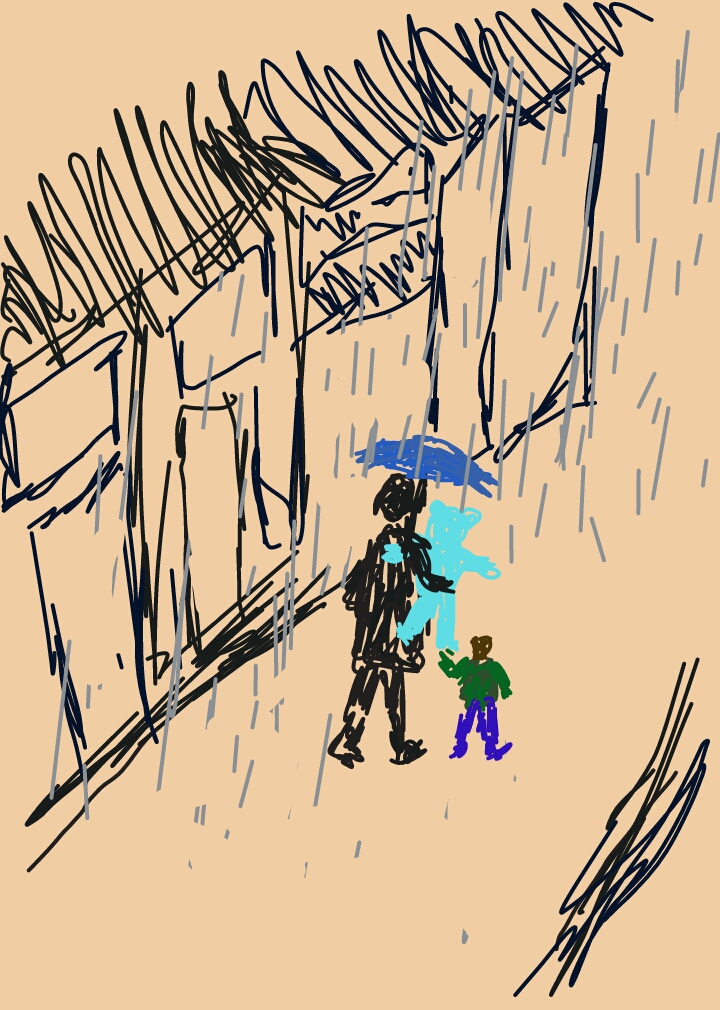 That's the kind of pickle I get myself into; I remember buying a frozen turkey. But then, because I was on foot, I had to buy a small cheap backpack to carry it home in, and my back slowly froze from the chill of the turkey working its way through my inadequate jacket and unsuitable backpack.