We were "early-adopters" of home computing, and once the children were born (a long time ago now) the computer lived in a corner of the sitting room.

The actual corner has varied from time to time, but at the moment, and for the last I dunnamany years it has stayed in the same place. I say "it" - the techy stuff has been rebuilt, upgraded, reconfigured and whatevered every couple of years.

And somehow, the arrangement of the corner has been a bit of a mish-mashy messy sort of area.

This is all changing!

I don't have the really, really "before" picture, but here is the first change, mainly to do with tidying. The roll of yellow paper was a piece of sticky-notes-on-a-roll which had just fallen off the wall, where it was marking out the position of the new shelves. 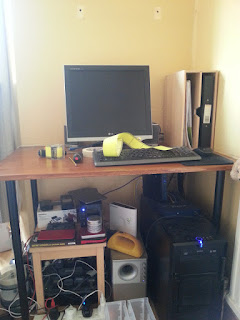 The heap of "to be filed" paperwork has gone (I suspect it may have been put "somewhere" as opposed to "filed", but that's a start), and the intricate arrangement (tangle) of near-identical (to my eyes, anyway) black cables with a variety of connectors is elsewhere. A couple of holes are all that remain of a single shelf that had been put up to hold software booklets and discs.

Aha! Three shelves will always look better than one! The single shelf had been annoying me for years! The plastic drawers under the bottom shelf were for storing cables etc... but

they really looked toooo cheap and flimsy for the job. So, the next day, they all got taken down (leaving ten holes in the wall) and we will have to look for something similar but more substantial, and more pleasing.

It doesn't take long for empty shelves to get filled.

Just this lot left to find homes for now.﻿
﻿ 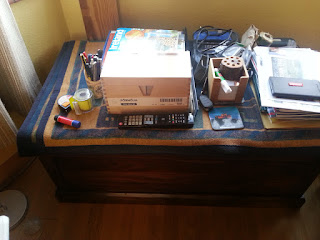 It is so satisfying to be steadily chipping away at the bits and pieces around the house which have just been waiting (sometimes for decades) to get sorted out.