Early mornings have been rather a feature of this last month.

﻿
Dawn (from an Old English verb dagian "to become day") is the time that marks, depending on the specific usage, the beginning of the twilight before sunrise, the period of the pre-sunrise twilight or the time of sunrise. When identified as the beginning of or the period of twilight, it is recognized by the presence of weak sunlight, while the Sun itself is still below the horizon. (Wikipedia)


As often happens, I've started blogging about one thing (whinging about waking up too early too often) and found myself following a much more interesting trail. Did you know there were different types of dawn?

Astronomical twilight begins at the moment after which the sky is no longer completely dark. This occurs when the Sun is 18 degrees below the horizon in the morning.[5] Though it is possible to localize the direction of the Sun during astronomical dawn and dusk, people in general experience astronomical dawn and dusk as night, even without clouds. The zenith is dark and more than just the brightest stars can be seen (except low above the horizon in the direction of the sun).

Nautical twilight begins at the time at which there is enough sunlight for the horizon and some objects to be distinguishable; formally, when the Sun is 12 degrees below the horizon in the morning

Civil twilight begins at the time at which there is enough light for objects to be distinguishable, so that outdoor activities can commence; formally, when the Sun is 6 degrees below the horizon in the morning. At civil dawn there is no darkness in any direction, nor at the zenith. The sky is bright, even when cloudy. 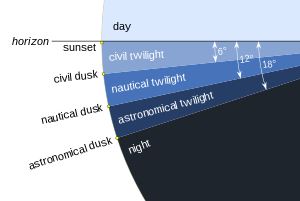 Looking at that, I think we have been waking up at all sorts of different dawns. Hey ho, tea is a good thing at any time of day or night.

Another cup? Don't mind if I do.