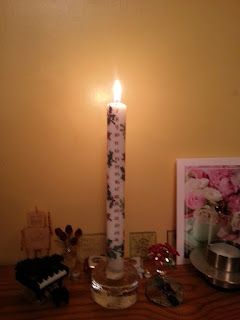 Monday evening. I didn't visit my mother today - my father went with a friend.

There are a happy thoughts to hang onto

- he took in a couple of new long-sleeve tee-shirts for her to choose from. The white one was rejected "if I wear that, I will be indistinguishable from the bed sheets". The darker green one was accepted, after a long debate; "what colour green would you call that?". The paler green one hung in the balance, and was nearly rejected after it was discovered that the colour on the label was described as "lichen", but was given a last minute reprieve.

- after a bit she sent both my father and the friend to take a walk around "The Queen's Gardens" nearby (in The Hague.) So they went off for some fresh air, and returned a little while later.

- yesterday I was writing about how much she hates the thickened foods and especially the thickened water - so much so, that she would rather go without. Today the nurses tried her with slightly thinner water in a cup with a spout. It was a sufficient improvement in taste and texture that she drank about three-quarters of a cup, without too much coughing and choking.

It is a serious problem, this swallowing business. If I've got this right, the problem is that the part of her brain which operates the flap which controls whether things go into the lungs or the stomach is just not operating properly. This means that eating or drinking anything poses a real risk (that's why it's called "Risky Feeding"). Thicker, puree consistency foods and drinks are easier to manage and cough up if they do go the wrong way. Thinner foods and drinks will go where they will before you have a chance to do something about it.

Meanwhile, I've been putting up our Christmas Tree, following the way I've always done it. Which is actually the way my mother has always done it. Sometimes I dream of being able to use purple, or tartan, or blue or turquoise colour schemes. It's just not possible. Like sitting with my arms crossed the other way around. It just doesn't feel right. 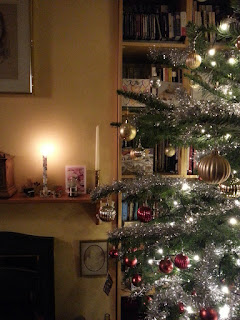 Email ThisBlogThis!Share to TwitterShare to FacebookShare to Pinterest
Labels: Christmas, My Mother