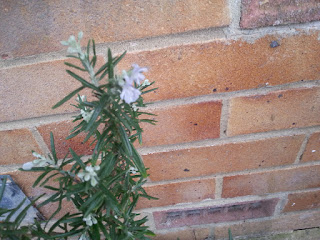 Rosemary. It's been in flower in a sheltered spot just outside the back door for a couple of days now. Is that normal for December?

Nothing is normal any more.

While my father was visiting this morning, my mother was assessed by the Speech and Language ?Nurse ?Practitioner?  - I don't know what her official title is - this lunchtime. She said that she had no previous experience of someone overcoming an end-of-life swallowing difficulty to this extent. The upshot of the assessment is that my mother is able to move from pureed foods to "mashed" foods, and things like omelettes or scrambled eggs. Cake may be a possibility; rhubarb crumble was found to have too many "hard" bits in it for easy swallowing.

This evening I went with my husband just as she had been given supper - a mashed up mixture which she rejected as being "revolting". I tasted it; she did have a point. I think it had originally been sausage roll and baked beans in an earlier incarnation. However one of the nurses appeared and said she had just heard that my mother could have "a mashed diet" and would she like a scrambled egg? This proved much more the thing; she ate half the egg, and half the ice cream. I happened to cough once or twice while she was eating, which brought a nurse at a fast trot to check that all was well.

We talked about this and that, remembering times past, and half watching and commenting on the film "The Queen" which was on television.

As for the rest of us - a quiet day, catching up on things. My father joined us for supper - a pleasant evening together.
Posted by KirstenM at 21:26:00

Email ThisBlogThis!Share to TwitterShare to FacebookShare to Pinterest
Labels: flowers, My Mother