Tuesday 5th January - One of those days

I had one of my most enjoyable teaching days for a long time (I was going to say "this year" but that's a bit unfair on the pupils!). Four classes in all, different ages, different musical topics, all fun.

The light as I drove home from work today was just something very, very, special.

After days of rain, there were patches of sunshine, and I happened to step into the lane outside the school in just one of the moments. The low, evening sun lit up the poplars like feathers, and the way up the hill looked like a road to some golden paradise in years gone by (I cropped the cars out of the picture!). 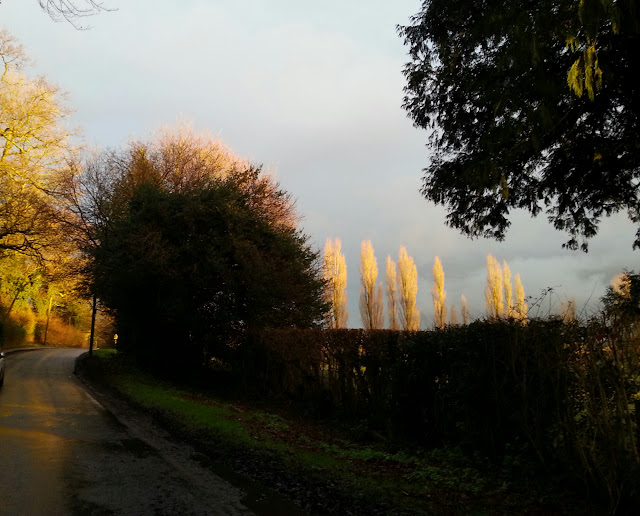 The air was still, and heavy with rain not yet fallen. My car was pointing up the lane, and it was very tempting to keep going in that direction, but I would have ended up (eventually) eastwards in the Ashdown Forest rather than home - westwards.

So I did turn the car, and drive towards the setting sun. I picked a different route to usual, for the merely pragmatic reason that the usual road will be closed for repairs next week, but I was glad I did so. Once past the green and the cricket pitch, the narrow lane twisted between deep backs topped with trees or tall hedges, with the light catching stray evergreen leaves at random. Then the air gave up the trial of strength with the rain, and heavy drops of water began to fall.

There was a tall, arching rainbow glowing in the light against the dark clouds. I shouldn't really have looked for it, but there were a few stretches where the road was long enough and empty enough and going in the right direction for me to glance out across the glistening fields.

Yeah - waxing lyrical and all that, but it was something out of the ordinary, something to hold on to.

The rainbow (and the rain, and the sunshine) accompanied me all the way home.

More delights - BB had cleared the Christmas Tree and all the decorations, leaving just these; 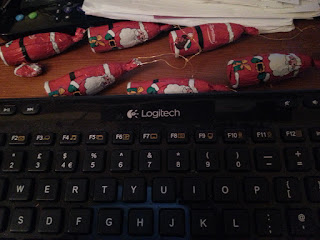 which number1Son had hung on my little fibre-optic tree. Apparently there had been nine; when I got home there were eight. Now there are only six.

And yet more - we went out for supper with my father - steak all round.