I didn't think I was going to find a quote for today - and then,

Well, not quite. The quotation I actually found was

"Perfection is the enemy of done"

but when I went a-googling, I ended up here

where I discovered that

The quotation I put at the top of this post is from Voltaire. Following this up took me to Japan, and the Japanese idea of wabi sabi. Here's some more wikipedia


Wabi-sabi (侘寂?) represents Japanese aesthetics and a Japanese world view centered on the acceptance of transience and imperfection. The aesthetic is sometimes described as one of beauty that is "imperfect, impermanent, and incomplete".[2] It is a concept derived from the Buddhist teaching of the three marks of existence (三法印 sanbōin?), specifically impermanence (無常mujō?), suffering (苦 ku?) and emptiness or absence of self-nature (空 kū?).Characteristics of the wabi-sabi aesthetic include asymmetry, asperity (roughness or irregularity), simplicity, economy, austerity, modesty, intimacy, and appreciation of the ingenuous integrity of natural objects and processes.
This "wabi sabi" goes some way to explain the Bernard Leach pots I remember seeing in the Tate at ST Ives, Cornwall over thirty years ago, (and in other places since). When I first saw them I thought that they were rather dull, but they've grown on me over time.

Years ago, we went to a craft fair at Wakefield Place. That's when I tried blacksmithing, and made a thing for holding a garden flare, but that's another story. I also had a go at glazing a raku pot. The potter had made several different designs of pot in advance, and we were shown how to dip them in the glaze and fire them. All tremendously exciting, because, while still red-hot, they were plunged into a container full of wood shavings, or maybe sawdust, which promptly burst into flames and smoke. Then, before they had completely cooled, they were put into a bucket of cold water.

So, the wabi-sabi tea bowl above also appears in the raku pottery entry in wikipedia, with the caption

Here are our pots (our daughter had a go too; wonder if you remember?). I think mine is the brown bowl, and her's the blue jar, but I'm not sure. I've taken them down from the high dusty shelf, washed and dried them. They are going to look fab upstairs on the bathroom on the bedroom window sill. 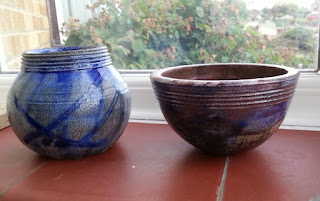 So, what started all this reminiscing? Ah yes. "Perfection is the enemy of done".