We spent last summer researching a replacement shed, as the old shed and garage had been demolished back in The first months of 2015.

We eventually made our choice,, ordered it, and took delivery in October 2016. To cut a long story short - an 18-month-long story - we set to yesterday starting at 9am, and finished, all bar a couple of extra brackets which he is installing even as I type), and finishing just after 5pm. 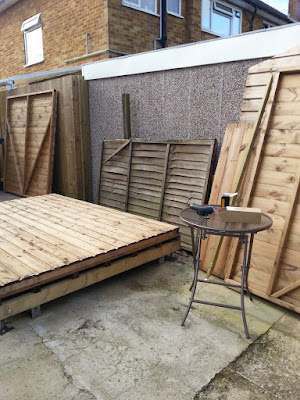 A lot of preparation had been going on over the intervening months. The slap has a 9 inch slope in one directions, and a couple of inches in the other direction, so we have built a supporting framework of stout timbers mounted on adjustable feet. That took several months or researching options, choosing, ordering, taking delivery, measuring, measuring, measuring and building. Worth it: the foundations are rock steady, and there is no movement at all when you move around. That was as far as we got way back in the spring.

What with one thing and another it's been an eventful and exhausting year, so progress was slow. We were waiting for a particular combination of circumstances: time, weather, fitness, family health issues, to all be reliably in our favour for a dependable number of days.

As we had ordered the version made with thicker, rather than standard panels, we had to work out how we were going to manage to move, raise, and steady the panels with just us two. Each panel would have to be positioned correctly on the base, which meant lifting them nine inches or so, and then balancing them on the very edge of the base. In order to minimize the risk of having your feet broken by a panel suddenly dropping off the base, we bought 8 concrete blocks to set down immediately beside the edge we were working on, to catch the panel. Good thing too; this did happen a couple of times.

He also pre-drilled all the pilot holes over the course of a few days, so that I wouldn't have to hold the panel up for any longer than necessary. He also constructed a couple of cross-braces, which could be fixed in seconds, to support the heavier panels.

We sized up the job on Wednesday, and decided that 11am was too late to start, to we put it off until Thursday.

The first snag we hit was that I was nowhere near strong enough to support the main rear panel for long enough for Nelson to secure the brace. Had we fallen at the first hurdle? Nope: I got a crash course into how to work the electric screwdriver, so that I could whop in the screws while Nelson held the panel. With the temporary strut it in place, it was no problem to secure the panel properly. 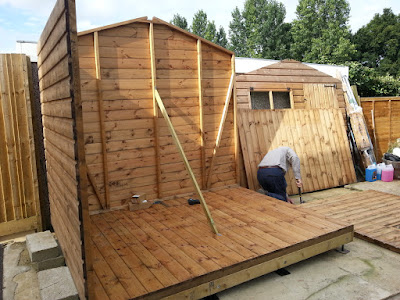 The side panels are massively lighter, and I had no problem balancing it upright. This was all very encouraging. Our next door neighbour appeared to "see what all the bustle was about". Great! "Have you got time to give us a hand?" "Sure!" was his reckless reply. He was only filling in time before going off to have a tooth out in half an hour or so. 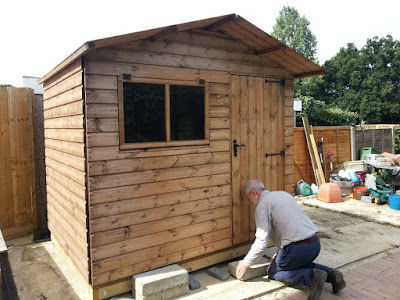 With his help the heavy front panel was no problem for me at all (I didn't even need to assist). After he left to go to the dentist (I like to think that we helped take his mind off things while he was waiting) we got the roof panels on. There was a little delay in fixing the felt - part of the prep work had been cutting the hedge at the bottom of the garden the day before, so that we could extricate the step ladders, which now needed serious WD40 before they would condescend to function.

However, by lunchtime, the felt was on, and he was able to use the position the concrete blocks in their final place, to make the steps. 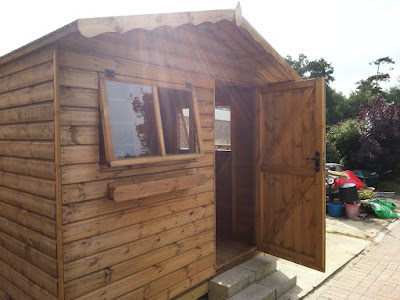 And here it is - the completed building, with window boxes and fancy carved eaves. We have opted not to add the decorative, but non-functional, shutters at this stage. There is "sweetly pretty", and then there is "insufferably twee". One has to have a little taste and discernment in these matters.

The next task is to sort out and tidy that great conglomeration of assorted garden stuff, and useful bricks, sticks, buckets and whatnot that is visible behind the shed.

He's back now; so the extra brackets are on to make sure that our shed roof never gets delusions of being an glider in high winds.