So, as well as making cake and bread and eating blackberries yesterday, we did a massive amount of gardening.

Both of us in unison said words to the effect of "I wish I'd taken the 'before' photograph", but we didn't. so you will have to use your imagination. See the way my compost bin has been engulfed? The bit we tackled was further down, and the tangle had filled an empty patch, and taken over three or four shrubs in this sort of manner.

I've dealt with the bin, and it is back in use again. Just as well, the worms were getting ready to make a break for it in search of food.

Anyway, step one was to attack the "flower bed" the strimmer, which cleared the brambles and goosegrass down to ground level. He did that a couple of days ago, to this session started with using a sort of grapping hook on a broomhandle contraption to haul the debris out of the border. The various lumps of broken concrete buried in amongst everything (something to do with the original vegetable garden when we first arrived back in 1984) amounted to a sizeable pile. 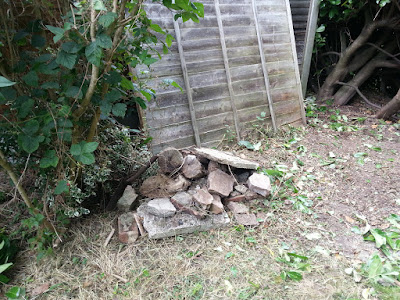 Demolishing a rotten fence panel was the work of minutes, but cutting down some mature ivy and trimming back the laurel hedge took a leetle bit longer. 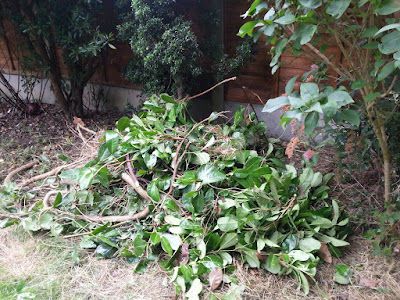 A salvaged not-yet-broken panel fence panel (rescued from a neighbour who replaces panels when they are beginning to break rather than when they are broken) was re-made to fit the gap. See those massive laurel trunks? I planted them all just behind our back fence back in about 1986 - cuttings that were only about one foot high, that a work colleague was selling for "£1-and-can-I-have-the-posts-back". 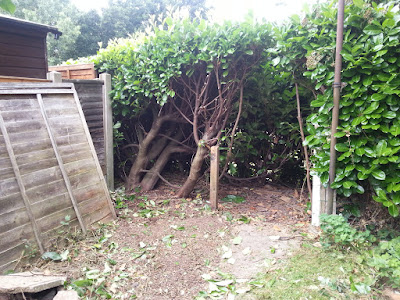 "A proper bit of farm-yard-style DIY" he called it, as he sawed and chopped and hammered and nailed. The gate was a bit of a challenge (we brought it from the house-before-last and it's had a hard life). The hinge had to be reconstructed as the lower hinge-pin had broken off - that involved drilling through a metal bar in order to fix a bolt to act as a hinge-pin.

The next ingeniosity was to create something for the latch to latch into; a metal plate and a dozen washers works perfectly.

Job Done, as least as far as the gate goes.

Meanwhile, I had set to work on reclaiming the path to the gate. That's probably why I've got aches and stiffness when my arms join on to my shoulders at the moment. I didn't finish the job, partly due to the arms and shoulders (and hands and knuckles) protesting, and partly because I would have got trodden on or bashed on the head while the Farm-yard-DIY was in progress. 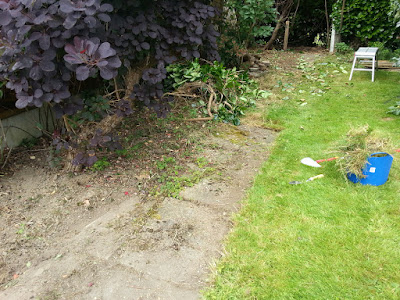 Did I mention that he mowed the lawn AND trimmed the pink jasmine as well? 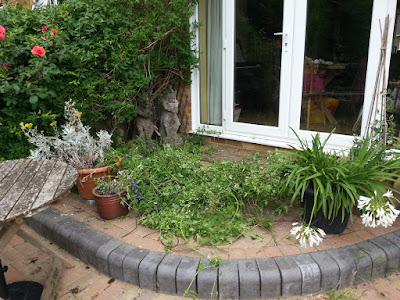 Look at the agapanthus; I divided and re-potted them earlier this year, and expected them to sulk, but all four pots are full of flowers! 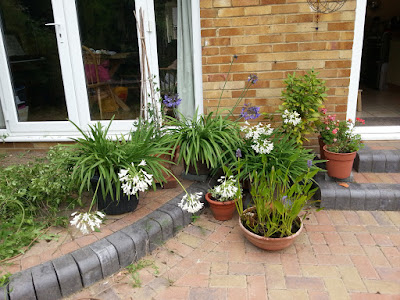 We've slightly miscalculated: this week is recycling collection, so the garden waste bin won't be collected until next Tuesday

and as you can see, we've all this lot that won't fit in the bin!

It's a day off from gardening today - rain has stopped "play".