I was on the rota for playing the organ in church. "Dear Lord and Father of Mankind" is always a bit of a tricky handful, so I wasn't surprised when some of the harmonies sounded a little "original" first time through. It was a bit disappointing that the second and third times sounded no better. Further investigation exonerated me from 90% of the discords. Something is up with the intricacies of the mechanism, or maybe the electronics, of the organ (untrustworthy brutes - not my favourite instrument at all). Certain notes seem to play at the same time, regardless of which stops you choose, giving the whole rendition a surreal sound surround which I am sure would horrify the composer. (Even the congregation MUST be aware something is adrift).


So I abandoned the contraption, which was sounding more and more like a fairground Wurlitzer, and played everything on the piano. Which suited me JUST FINE. That was in the "early" or "more serious" service. Afterwards, we had the "First Sunday of the Month Cafe Church" event - a much more laid back, informal affair. Someone had got their hands on a pop-corn making machine, something like this; 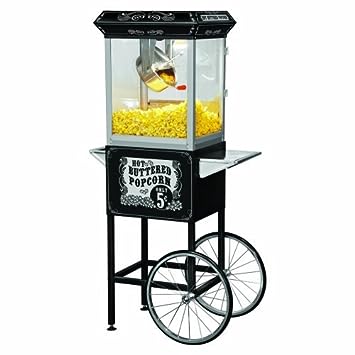 I kid you not - it was a man-size, not counter-top-toy-size version - and it was pop-pop-popping all morning in the hall, while people were making up shoe-boxes to send to Roumania, something we do as a church every year.

I'm not sure but this might be the organisation we send them to. The pictures on the site look a bit familiar. The boxes are filled with soap, toothbrushes, combs, gloves, hats, colouring pencils and paper and so forth in them, tailored for children, babies, men, women, elderly people - have I missed anyone out?

I wasn't involved in the packing, as we also had African Drumming going on in the church, ready to join in with the actual church service at the end of the morning. That was my contribution the the chaos and mayhem.

Sort of along these lines - age range 3 to much, much older. Older than me, even. Oh yeah - we made a brave sound!