Having had yesterday's post sabotaged by predictive text, I had this afternoon's music lesson sabotaged by automatic subtitles.

I'm teaching the ocarina to a class of children, aged about ten and eleven, and I've set my heart on getting them to perform "Themes from the first movement of Beethoven's Fifth Symphony arranged for ocarina trio". The whole idea is so ridiculous, that it is irresistible, which is why haven't been able to resist it.

In order to provide a little light relief from the sound of 25 inaccurately played ocarinas, and to familiarise them with a Classic piece of Classical music, I have been showing them different versions of  the first movement of Beethoven's fifth on YouTube.

This one is very popular - we've watched it twice so far. The children are mesmerised by the graphic score which gives a surprisingly clear visual image of the music. 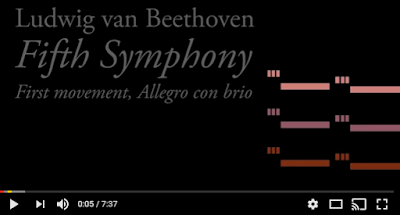 This afternoon we watched another version with a commentary created by P D Q Bach, in the style of a sports commentary of a baseball game (hence the ref standing behind the conductor). For the benefit of one of the children, the teacher caused the automatic subtitles to appear on the screen. We got rid of them pretty promptly after a couple of unnerving captions that appeared in the first few minutes.

This was the subtitle 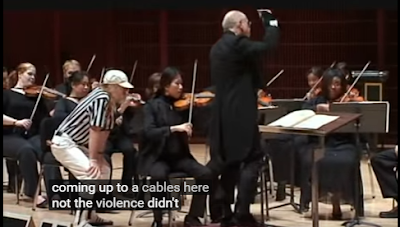 that should have read something along the lines of  "Coming up to a cadence here, no, the violins didn't...".

I began to be concerned that the captions would just be a whole series of unintelligible rubbish. Then this appeared; 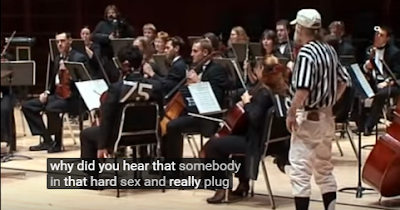 What the commentator actually said, after a blatant and deliberate wrong note from a french horn player, was "why, did you hear that somebody in that horn section really flubbed (that note)".

At this point the class teacher and I exchanged glances, and we restarted. This time without subtitles.