Sunday 2nd April - of flowers and fudge and other things

This week I saw the first flowering of Lady's-Smock, also called Cuckooflower;

I've deliberately snitched a blurry picture from the web, because that's how I see it - in drifts of pink in sunny patches along the lanes as I zip along from one place to the next. Every year I struggle to remember its name... although it didn't take me quite as long to get there this time.

I've been seeing primroses for a while now, and today I saw great drifts of cowslips along the grass dividing the hither and thither sections of a dual carriage way. "Primroses," I said to myself. "No! The first cowslips!". Other travellers must have been able to notice them for days already, as they were well in flower.

Celandines, daisies, dandelions, wood anenomes... this past week's weather of alternating rain showers and sunny afternoons has done its work on the Sussex countryside.

I've been forgetting to bring in my seedlings overnight, but they have survived, so yesterday I shoved them into planters in my growing vegetable plot. 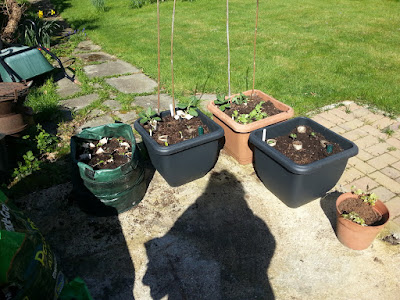 How about that shadow for showing for the strength of the sun at midday today? The green sack has 9 pak choi seedlings, I've added another four lettuce plants to the black planter next to it, filling the space not used by my broad bean plants. 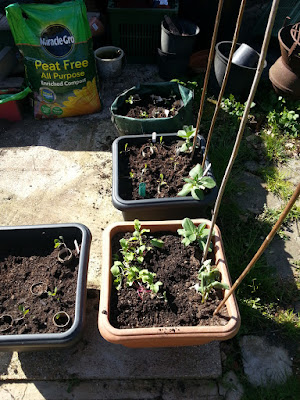 The brown planter has two more broad bean plants and a tangle of radishes, and the remaining black planer just has four sad and spindly brussel sprout plants. I've been using loo roll and kitchen towel inners and various cardboard cartons as pots to start my seedlings in, so that I can just put them into the planters without disturbing them too much. The earth was surprisingly warm - I'm glad the cats haven't discovered that they are excellent sun traps.

The next load of seedlings are on a window ledge. This morning, the spinach seedlings arrived - the beetroot and spring onions are taking a little longer.

What of the fudge? We went to Arundel for a belated Mother's day out, taking No 1 Daughter with us, meeting up with No 1 Son (that's how come I saw all those cowslips).

Well, hey, what do you know! Roly's fudge is back - it disappeared for a while which was a great loss as far as we are concerned. We went on a little walkabout round well-known haunts. Every restaurant that looks at all appealing was fully booked, but in the end we found an outside table at "Belinda's"

which to begin with seemed a "not-so-good" idea - it was still a bit chilly. As time went on, tea arrived (large teapot accompanied by large pot of hot water, trademark willow-pattern blue-and-white chine) and battered cod and chips and salad arrived, and the sun arrived.

Then we walked further on to create space for more; Spark's Yard is a favourite.

It wasn't gift wrapped like the picture... inside it is full of everything you never knew people wanted to buy. Once you see it, of course, it all becomes "wantable". We escaped with merely a silicone washing up thingy which we thought would be good for grooming one of our cats. It's a sort of brushy kind of thing - ours is blue and rectangular and only one, unlike these examples which appear to be like flowers and come in threes. I suppose I could always have dug around in my handbag and photographed the actual thing.

Why would that be more effort that hunting around on the web for a picture? 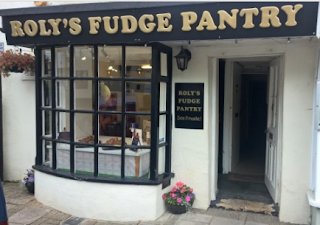 I was coming to that. I was very restrained - I sampled the strawberries- and-cream and the clotted-cream - twice, to make sure. I didn't need to taste the salted caramel. I abhor salted caramel. Then I bought one small piece of each of the maple-pecan, butterscotch, and coffee-walnut flavours. I left the shop at that point, leaving the rest of the samples in peace, and the others to choose what they wanted, and BB to pay. It's a very small shop and I was just in the way.

Email ThisBlogThis!Share to TwitterShare to FacebookShare to Pinterest
Labels: day out, family, flowers, thanks